My initial post about Marvel Heroic Roleplaying was generally negative.  I was skeptical, I liked how my supers RPGs worked up to that point, and all of the reviews and even the actual play podcasts that I listened to early on did little to dissuade me from my initial impression.  Since I already had my DCA and M&M3e, I didn’t need to spend money on another supers game, especially one that sounded so . . . alien.

With all due respect to the podcasts I listened to early on, there was a lot of confusion on the rules, and even the Watchers in most of those games seemed to not quite fully comprehend the rules.

In a moment of weakness, I bought the PDF of the game, read through it, and became much more interested in how this thing would actually work.  On top of that, I found a few more actual play sessions that, while not perfect, seemed to be giving the game a bit more of a shot, and seemed to understand the rules a bit better.

I was holding off on posting anything further on the topic until I had a chance to actually run a game session or two, but time, tide, and player interest don’t seem to be with me on this one.  But since I see people consistently looking at my first Marvel Heroic post, I feel bad that the impression that I’m giving out is entirely negative.

Also, one of my ongoing concerns, even as I became more interested in the game, has been campaign play.  One of the potential issues that I had with the game was addressed well in some of the house rules posted at the Doom Pool blog.

The default game structure is to run an “event,” broken up into acts and scenes.  While I may have a long term idea of where a campaign is going, the event structure works much better if you know where your acts break down, and have a fairly detailed structure for the whole she-bang.

Writing out a whole event, as in a long term style event that would serve as a campaign, is daunting.  Thankfully, the guys at the Doom Pool came up with a very simple suggestion that is brilliant and still completely appropriate to the genre.  Instead of breaking down into events, acts, and scenes, you break things down into series, issues, and scenes.  What normally happens between acts happens between issues, and a nice good length game session works perfectly as an issue.

And while I’m giving my allies resources  (see what I did there?), I also wanted to shout out to the Doom Pool Podcast.  No relation to the Doom Pool blog.  Other than that they are about Marvel Heroic Roleplaying.

I can’t tell you that you will like the game.  It is very dependent on players that get into describing exactly what they are doing and how, and if you have players that don’t really want to ham it up or a least spend some time explaining what their character is doing and why, it may not appeal to them.  Some people are less comfortable doing this than others. 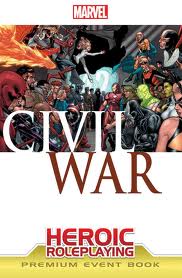 It looks really fun on paper.  It sounds really fun when you listen to people that are excited and buy into the premise.  It sounds like crap when just roll dice and announce numbers, because so many of the mechanics depend on narratives.

Maybe someday I can tell you if it works as well “live” as it does in theory, but I did want to amend my initial assessment of the game so that my previous statement wasn’t my final word on the subject.