At the upcoming Winter War 2013  (if you are in Central Illinois, you should totally swing by . . . don’t nod your head like that, I mean it) I am planning on running some slots of Marvel Heroic Roleplaying.  I know that I wanted some nice, thematic props, but I’m still slowly assembling my gear.

When running my games on Google+ I have been flipping over the cards that I have the hero and villain stats printed on whenever that character takes their turn, but that means whenever I need to look at the stats, I have to pick up the card and flip it back over.  In the Operations Manual, there is an illustration of a “coin” that flips back and forth when someone takes their turn. 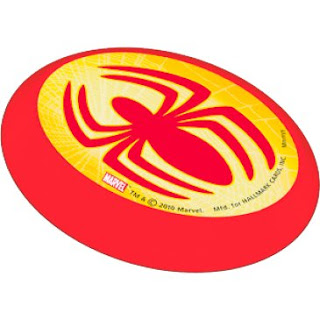 I decided to try and find a suitable “Marvel” coin to use for this purpose.  I looked on online party stores, and found some small Spider-Man “flying discs” that I thought about ordering, but I really wanted something less likely to get winged at me when I spent a d12 from the Doom Pool.

Lo and behold, when I made a trip in person to the local party outlet store, I found a set of Avengers erasers that have a picture on one side and that are blank on the other.  These are perfect for “initiative coins,” so I grabbed them.  I may go back and pick up so more, and get the Spidey ones as well.  For some reason I like the symbols better than the pictures, so the more I get, the more I can customize what I use.

Back before I started using my tablet for my Watcher rolls, and using the Dice Tray Pro app, I wanted to have a nice thematic item to hold my Doom Pool.  I ended up getting a plastic Avengers cup  (after fruitlessly scouring the internet for a plastic cup with Doctor Doom on it . . . sigh).  At the party store, I found something slightly better than the cup. 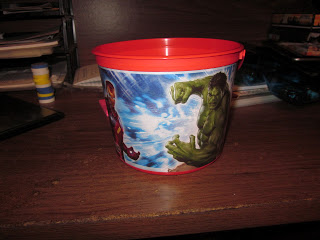 Now, if I ever need that to hold the Doom Pool, there would have to be a lot of 1s flying around the table.  Still, good to know you have the capacity.

Finally, when I run at Winter War, I’m planning on having player’s dice all laid out and ready for them. Not every gamer brings 5d8 and 3d12 to a convention, and while I’m all for boosting the FLGS dice sales, just to be on the safe side, I was planning on bringing a dice caddy with color coded dice, which will just be slid to whomever is going next.

I have yet to order it, because I was trying to find something similar “in person,” but I found a rather nice five compartment tray online that I’m rather smitten with.

I’ve got a few months, but the next step is to print out all of the hero datafiles that I want to make available on cardstock, put them in plastic sleeves, and get some dry erase markers for the table so that the players can write the stress, trauma, and complications right on the character sheet’s cover.