Yes, I read my comics this Wednesday, but hoo boy does time get away from you when the time machine is in the shop.

So, without further ado, let’s look at what the comics caused to sprout in my brain, shall we?

First up, let’s look at Avengers Assemble #7.  There were cosmic events!  There were mass battles!  Explosion!  But what inspired me?  Black Widow and Rocket Raccoon both perform support actions that save various heavy hitters that get waylaid in the big fight.

The next milestone is inspired by the relationship between Xavier and Scott as explored in Avengers versus X-Men #11, as well as Captain America’s acknowledgement of Xavier’s expertise in the situation that is unfolding in that issue.

I Put You On This Path

Now Let’s Roll Some Twelve-Siders and Crack Some Skulls

This next set of milestones is based on the team up that wasn’t, namely Captain America and Black Widow #636.

The World is So Much Bigger Than We Comprehend

Finally, this last set of milestones is based on the events of Scarlet Spider #9. 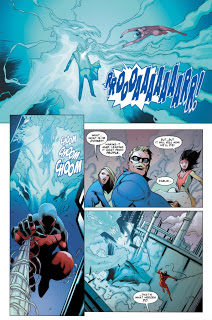 This is Not What I Signed Up For