You know how much work this little endeavor is likely to become next month when Marvel Now launches?  When I have to sell an organ so I can sample a whole bunch of relaunched titles?  Ah well, what’s a kidney when it comes to comic book goodness?

The first inspiration for this weeks milestones comes from Daredevil #18.  It is taken from the current dynamic between Matt Murdock and Foggy Nelson.  I like to call this one:

I Know You Said Not To Call For a While.

1 XP  When you are in a situation and you realize that a friend outside of the hero community, one that you may not be on good terms with, might be able to help you.

3 XP  When you ask your old acquaintance to help you in some manner, and you then perform a favor for them to pay them back for their assistance.

10 XP  When either your favor or the favor you do for your friend leads to major trouble, and when you resolve the situation, you either fully renew your friendship, or you consider all of your debts to one another paid and you go your separate ways.

The next set of milestones is inspired by Spider-Men #5, and the exchange between young (Ultimate) Spider-Man Miles Morales and older (Amazing) Spider-Man Peter Parker.  Let’s call it: 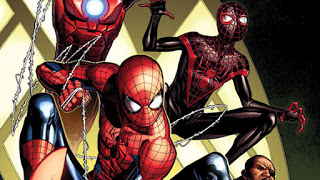 Don’t Let Anyone Clone You

1 XP  The first time you are in a buddy or team affiliation with a younger hero that hasn’t had some of the exotic adventures that your career has offered you, and you begin to share your experiences with them.

10 XP  When your less experienced ally defeats a foe beyond their previous experience after you have provided them with a resource or performed a support action in the same scene.

And finally, we’ll visit Spidey’s old friend Flash Thompson, currently acting as the secret Avenger known as Agent Venom.  This one is inspired by the events of Venom #25.

Being a Super Hero Blows

1 XP  When current events make you recount the path that led to you adopting an unlikely career as a super hero, and wonder if it’s really who you are.

3 XP  When you emotionally stress out an opponent with a Menace specialty using your reputation as a “dark” hero, or when you give an order to a former villainous or monstrous opponent and they follow that order.

10 XP  When you defeat a major threat either because you emotionally stressed out one or more of their minions with your fearsome reputation, or you defeat that major threat while you have a former minion of theirs in either team or buddy affiliation with you.