Wednesday, Right After Tuesday, Where it Belongs (Wednesday Milestones)

After reading a my Wednesday comics once again, here are some milestones inspired by actual comics!  Yet again!  No, really!  Let’s jump into the fray . . .

First up, a set of milestones inspired by Amazing Spider-Man #695, and Madame Web’s (Julia Carpenter) warnings for Spider-Man over the last several years.

It’s Too Late For That

1 XP  When an ally of yours tells you that there are difficult times ahead, and you either deny that they have any special knowledge of the future, or you express frustration over vague warnings.

3 XP  When you create a resource while collaborating with your prescient ally, or you take stress or trauma in a situation they warned you about.

10 XP  When the dire prediction given to you by your ally comes true in the worst possible way, despite your best efforts, or you managed to take the warnings of your ally and defy fate, creating a victory with the knowledge given to you about the future.

Next is a set of milestones inspired by Avengers vs. X-Men #12, but equally fueled by the ramp up and resolution to any major event that your character knows is coming, even if his allies don’t see the big picture. 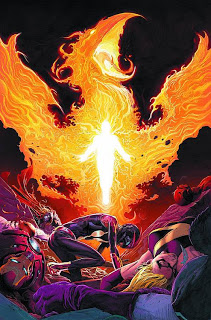 Nothing Else Burns Today

1 XP  When you are involved in events that you have a feeling will have major importance, and you impart this feeling to your allies.

3 XP  When you personally help to recruit a large coalition of heroes to deal with a threat that is greater than you first thought it might be.

10 XP  When you are part of the final battle against an opponent that is involved in a a world-wide  (or greater) threat that involves scores of heroes, and you are vital to the final victory, or when you fold under the pressure and leave the final battle just when you might have made a difference.

And a set of milestones inspired by the comic crossover that wins my award for “favorite name of a crossover for the year,” Minimum Carnage Alpha #1: 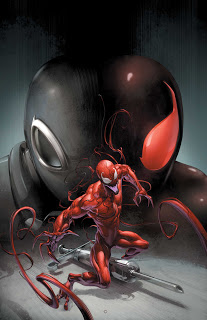 You Just Can’t Stay Away From Me, Can You?

1 XP  When are called into a situation that involves an old foe of yours, or a foe that is somehow tied to you on a personal level, even if you have never personally fought them.

10 XP  When your old enemy reaches the height of his nefarious plan, and you either manage to defeat a plot grander than any of his that you’ve dealt with before, or you decide that he has moved beyond your ability to handle, and you call in a new hero to deal with his plot.

This next one is a technicality, because the series is a reprint from a few years ago, but you know what?  I loved Rom, so this one get’s “new” status in my eyes!

When Your Father is the “Greatest Hero of Them All,” Everyone Expect the Same of You

1 XP  When you wonder what your heroic parent would do in a given situation.

3 XP  The first time in a scene you take on the same or a similar mantle as your parent, and you specifically call attention to your parent’s legacy.

10 XP  When you defeat a threat that is as great, if not greater, than anything your parents faced, or when you find your parent’s mantle too daunting to uphold, and you renounce any claims to your parent’s legacy and heroics in general.

And finally, a milestone inspired by the current story arc unfolding in Uncanny X-Force, based on a decision momentous enough to have even Deadpool feeling regret:

1 XP  When you express regret for a major decisions that you were part of making, either to yourself or to those that made the decision with you.

3 XP  When you take stress or trauma in the course of attempting to right a situation that you feel you need to rectify.

10 XP  When you either find a way to make amends for the difficult and distasteful decision you made in the past, or you realize, when you are in the same situation yet again, that you have to make the same decision instead of making amends.

That’s all I’ve got for this week folks . . . hope you enjoyed them!