Elminster’s Forgotten Realms Remembers the Past

I was at Gen Con 2008 when WOTC decided to celebrate “20 years of Drizzt” a year early instead of 20 years of the Forgotten Realms.  I remember very clearly purchasing the long awaited Grand History of the Realms, a massive timeline of every major event in Realms history, consolidated and annotated. This book was primarily the work of Brian R. James, a fan who diligently worked to make all of the pieces fit.  You may have seen his name on a few Realms and D&D products since then.  Brian is a hardworking and diligent guy, so he deserves the bump and the freelance jobs, and none of this debacle has anything to do with his passion for the Realms. 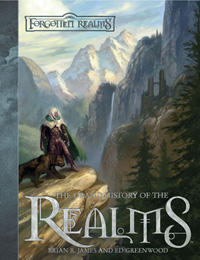 What debacle?  When the WOTC hardcover version of the Grand History of the Realms was released, the last two pages or so weren’t timelines that Brian had assembled from various products over the years.  Instead, they were a rundown of what was currently going on in the novels, and what was about to be unveiled.  And the last entry essentially said “everything you know is gone, come back to see how horrible the Realms are in 4th edition!”

No, I’m not kidding.  It was a dire message that said that a terrible new age had begun.  Not exactly the kind of thing you do for a setting that has been around 20 years  (much longer if you count Ed Greenwood’s home campaigns and even longer if you count his unpublished short stories).

Even that wasn’t quite enough to get me off the band wagon.  The final straw was the Secrets of the Realms seminar that WOTC put on at Gen Con 2008.  Dragon Magazine . . . not the traditional one, the one that was only made up of electrons . . . put out a really interesting article on 4th Edition Cormyr that detailed lots of what happened in the intervening 100 years in the Realms, who was in charge, what wheels were turning, etc.

At the seminar, we got to hear “hey, did you guys like that Cormyr article?  Great.  We’re not doing articles like that from now on, but it’s great that you liked it.  Vague stuff that lets us stuff 4th edition core concepts is much better for what we have planned.  But, hey, Drizzt is still alive, so you have to love that, right?”

All of that, coupled with a fairly candid post by one of the designers that flat out said, “we aren’t designing this version of the setting for you, because we know you buy Realms stuff, but we need new blood, so long term fan concerns aren’t what this is about.  Be thankful there is still a Forgotten Realms to buy,” convinced me I was out.  The marketing strategy was pretty much, “there are people that don’t like the Realms, so to get them to buy the Realms, we need to make the Realms more generic with more D&D generic stuff in it, and 90% of the old Realms fans will buy anything with Realms on the cover, so we should easily make up the difference.”

I’m not sure what the actual numbers told them, but I suspect a lot more people said, “hey, this Golarion place looks interesting” than they expected.  I have said before, while it’s not my favorite ruleset, I would likely have been playing 4th edition if the Realms had been more recognizable to me.

I know there are people that really don’t like the Realms.  I suspect in some cases this is fueled by the feeling that the Realms “killed” Greyhawk as the default D&D setting.  I disagree.  Internal politics killed Greyhawk as the default setting, and none of that has anything to do with the Realms, or the fact that it turned out to be popular.  Heck, I like Greyhawk, and played a few characters in the setting, but as a DM, I customized my own weird, cobbled together setting right up until the Forgotten Realms came out, and from that point on, I knew I wanted to run games there.  I didn’t leave Greyhawk, as a DM, I never went there to begin with.

I’ve also hears over the years that in the dark days that were the last gasp of 2nd edition, the only products that turned a profit were the Forgotten Realms products  (I’ve been called out on this before, and I’ll only say two things . . . I don’t have the figures, I’m just relating what I’ve heard, and also, the products turned a profit, not TSR, i.e. they made more money on the Forgotten Realms products than it cost to produce them while they were bleeding money on a ton of other projects).  It makes sense that while the Realms may not be universally loved, it does have a dependable installed base that seems to call for a certain amount of respect.

TSR and WOTC have both contributed to their own PR issues with the setting.  Not only have they both put out way too many products that focused squarely on the wrong aspects of the setting  (powerful NPCs that are suppose to be background players, gods that get personally involved with events, continent wide magical conflicts that should either have way more or way less impact on the setting than they end up having), but they have designers that get a bit too candid in explaining how they personally don’t use the Realms or have issues with the Realms and are going to fix it for people that don’t like the setting.

I’d be willing to bet that while they may have picked up some 4th edition Realms fans that had no opinion one way or the other before it launched, I don’t think they moved too many “no setting for me,” or “Greyhawk or bust” types over to the FR column with their changes.  I could be wrong.

What is all of that long winded wall of text above me about?  Well, it’s about the fact that, due to the release of Ed Greenwood Presents Elminster’s Forgotten Realms, a book that is edition neutral, and a least somewhat era neutral, I looked back in on the Realms for the first time in a while.

Before I picked up the book, I finally watched the Forgotten Realms seminars from Gen Con 2012.  I still could care less about the main D&D presentation.  There will be a new edition, and it will have rules and stuff.  Okay, cool.  Wake me up when it gets here.  But the Realms seminars were eye-opening in that this was not the normal corporate spin of “when the new Realms products launch, it will be awesome, just wait and see while we tap dance.”  In fact, there was a fairly solid amount of “we screwed up, pushed the setting too far, and we know we have to fix it, and by fix it we mean make it more like it used to be.”

The first step is admitting you have a problem.

I now have the book.  Its actually a very pretty release.  Excepting the weird grainy-smooth cover, the art is nice, the font is nice, the pages are pleasant to look at and kind of in the old world tradition of how Realms books have looked since the FR series and continued on through the 3rd edition releases.

What I have read so far reminds me of the Volo’s Guides, and has a lot to do with capturing the feel of the setting, rather than explaining rules changes between editions or trying to shoehorn in new concepts.  It’s the kind of thing that made me really like running games in the Realms back in the old days.

I hope this is indicative of Realms products going forward.  I had very briefly thumbed through the Neverwinter Campaign Setting a few months ago, and what little I read made me think, “if I had to run a 4e Realms game, I would use this over the original Campaign Guide,” but I chalked that up to being a bit of a fluke, perhaps because it was being tied to a computer RPG.  But after Elminster’s Forgotten Realms came out, I started looking at the Menzoberranzan book that just came out, which is also edition neutral, and has notes on various eras of the city’s history.

This could be a good sign.  Especially if they go back to making the books look more the Elminster’s Forgotten Realms and less like the huge white space impregnated Star Wars Sage/4th Edition layout scheme that lets them pad out about 33% of the book with formatting decisions.

Still, WOTC did a LOT to damage goodwill towards this setting.  I know the authors and freelancers want the best, but I don’t blame anyone that wants to wait and see how the decision makers will actually influence the development of the setting going forward.  Until then, I’m going to go read the four paragraphs on Realmsian underwear.