Wow, where does the time go?  I’m almost closing in on the next session without having this recap posted!  Bad Watcher, bad!  Well, let’s fix that now, shall we?

You may remember from last time that the group had a rather unfortunate problem with the Hulk going wild and dropping a SHIELD base on the party and the villains both, and Tony had to call Cap and have him call in a favor from Dum Dum Dugan, bringing the Leviathan Helicarrier to help out, dropping the Hulk with a squad of highly trained SHIELD Hulkbusters, and bringing Hawkeye as a reinforcement.

Not wanting to come in conflict with his boss, and because the group is close to the “hands off” territory of the internationally protected Vibranium mounds of the Savage Lands, Dum Dum Dugan took the Leviathan behind some mountains to wait for any other potential problems.

Keep in mind, my Doom Pool is starting at 5d12 and a d10.  No one is attempting to recover, and Hulk isn’t coming out to play any time soon  (for those keeping track at home, Hulk immediately rampages at 2d12 dice in the Doom Pool).

I decided to spend down the Doom Pool a bit, and had a pack of raptors ambush the group, and they nearly tore out Deadpools entrails . . . not that torn out entrails is a long term problem for Deadpool.  The group closed back together, Wolverine and Hawkeye climbed some trees to get away from the raptors, Iron Man missed them with a salvo of micro-missiles, but eventually the party took them down, with Hawkeye firing an Adamantium arrow through the heads of three raptors at once, but not before a raptor crept up behind Deadpool and stole his equipment, which, like having his entrails ripped open, isn’t a long term problem for Wade.

After a few moments of rest, the group forges on, then gets attacked by a mob of mutates.  The New Avengers  (and Deadpool) weather that storm fairly well, but then I spend yet another dice from the Doom Pool to have Brainchild get the drop on the group, and then add a dice to boost Vertigo’s mental blast ability.

Hawkeye, Iron Man, Wolverine, and Deadpool faced off against Vertigo, Brain Child, Lupo, and Barbarus.  Not exactly the Masters of Evil.  How did it turn out?  Not good for our heroes, surprisingly.

One lesson learned?  A really effective character in some instances may not be in other instances.  Wolverine and Deadpool could resist Vertigo, but Hawkeye and Iron Man were getting lots of mental stress from Vertigo.  Plus, we figured that Tony and Clint were both pretty distracted by Vertigo, since, you know . . . female.

Wolverine managed to intimidate out Brian Child to a gibbering wreck, Hawkeye took out Lupo’s summoned wolves with a teargas arrow, but amazingly Barbarus  (with a d12 expended boost) complicated Wolverine out by tying him up in knots. 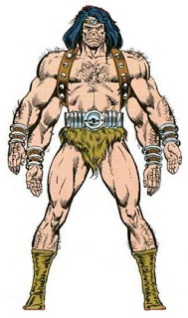 Barbarus went down, but then Lupo took out Hawkeye and Vertigo took out Iron Man.  That left Deadpool to face off against Lupo and a newly summoned pack of wolves, and of course, my remaining 2d12 in the Doom Pool.

Deadpool took the opportunity to kill off Lupo’s wolves to make fun of him and taunt him, the two go back and forth for a while, and ultimately, I spend the 2d12 to bring in reinforcements for Lupo, so that as Deadpool takes out the wolf themed mutate, the whole party is waylaid and dragged off to Magneto’s old fortress in the Savage Land.

Doctor Strange’s player was buying a car, so Stephen was busy having yet another vision, which we’ll narrate at the beginning of the next session.

What I continue to enjoy about the system is how I can see a comic book style narrative develop.  Seeing Tony vulnerable to someone that isn’t based around brute force or technology makes perfect sense, and while 90% of the time this group of characters should be able to take out the Savage Land Mutates, when the story calls for them to “just barely lose” or for an ambush to be especially devastating, the Doom Pool can really help to convey this feeling.