Watching the Edge of the Empire

I mentioned this a few posts ago, but I’ve got a mystery issue where I have some wonky access issues around the middle to final third of my normal online gaming time, which require me to fully reboot our router to get back online, which on top of being a pain, also potentially boots everyone else in the household off of the network for a while.

Yeah, I know, modern day techno-babble issues, we don’t care, make with the blogging and the game talk.  Or not.  As you will.

My Marvel game on hold until I can figure out what to do about my internet issues, at least for hours long sessions, I popped in on my friend’s Star Wars Edge of the Empire session at the FLGS.  Spoiler:  I’m going to be joining the game for a while, since my online gaming is on hold until I can get a handle on my server issue.

The group is comprised of an Assassin Droid with Medical Droid programming, a Wookiee, a Trandoshan gunman, a human expert in Xenobiology, a Twi’lek politico, and a Rodian tech.  They were on a scavenger hunt, which at the moment took them to Dathomir to track down some Rancor eggs.

There were a lot of electronic devices at the table with Fantasy Flight’s dice app, and not many “real” dice standing in for the specialized dice of the RPG.  Some of the players have been with the game for a few sessions, and others have just joined, so there was still a bit of a learning curve picking up what the dice symbols mean.

Once people get up to speed on the symbols, however, it didn’t seem too hard to figure out what they meant.  In the roleplaying/research/exploring aspects of the game it seemed like there were some fun situations caused by the GM and players figuring out what the non-success and failure results meant.

There was, however, combat.  I didn’t look at the stats the GM has for rancors, but they seemed to be pretty nasty monsters.  While they may get more competent, and have a few more options, much like d6 Star Wars, Savage Worlds, or the 40K RPGs, something big and nasty tends to stay big and nasty even with characters that have spent a lot of XP on advancement, which I think is a strength that non-level based games have in portraying Star Wars.

Luke might have had a better chance at surviving the Rancor in Return of the Jedi, but in a straight up fight, it probably would have shredded A New Hope Luke almost as fast as Empire Luke or ROTJ Luke.  Luke just has better options to avoid that straight up fight.

The players found a rancor, shot it in the eye, closed a door, and ran away.  They tracked down a nest, ran into another rancor, and the Twi’lek politico got its attention and ran for the ship.  I think the plan was to blast it with the ship laser cannons, but things got fuzzy in the heat of battle. 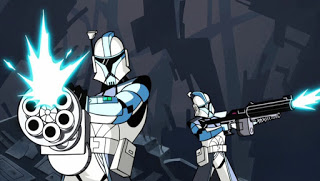 I will say that the effectiveness of an auto-fire weapon seemed internally logical, but didn’t quite seem like “Star Wars” to me.  It was a little too effective.  I’m not sure why.  I do know that auto-fire is one of the things that has gone back and forth in the playtest document updates, so I may not be the only one thinking that you should get something from auto-fire, but not have it be the logical “go to” in a setting where a lot of the main characters just carry heavy blaster pistols.

Once people got up to speed on how to build dice pools and how to read the symbols, things seemed to go fairly smoothly.  A few rules aren’t in the most obvious location.  I’d chalk this up to the rules being in Beta, but Fantasy Flight does tend to hide fairly important rules in plain sight, in my experience.

I’m interested to get involved first hand.  The rules do seem to allow for modeling Star Wars fairly well, excepting my slight concern about auto-fire and it’s importance in combat.  We’ll see how my Gand accountant who is an expert at credit laundering works in the game.