Over the weekend there was a bit of a dust up about why people like “old school” RPGs and what it means and how game companies are suppose to “take” gamers that embrace “old school” RPGs.  In general, I think the topic was a little difficult to get one’s arms around, and led to lots and lots of really broad statements.  While it may not be helpful for someone looking for a quick answer, I think the best thing you can do, if you have the time and you have the desire to really know, is to look at it gamer by gamer.

I just recently got to run my first game of Dungeon Crawl Classics.  I really like the game.  Before I purchased that book, I was never very “old school” in my game choices.  My patience for really complex fiddly game systems has diminished, but that doesn’t automatically shift me into the “old school” column.  Or does it? 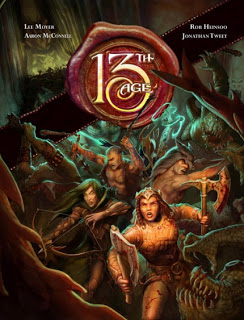 I never had a burning desire to return to BECMI D&D or AD&D.  Every time I got a bit of an inkling to do so, things like THAC0 and a proliferation of level based “static” saves dulled my enthusiasm.  It’s not that I can’t “handle” them, I just had a hard time thinking that you couldn’t revisit the simpler rules of earlier editions and also address the more logical expression of attack bonuses, armor class, and saving throws.

That having been said, I couldn’t help but peek in on the OSR blogs that I saw, because there was something there.  It wasn’t just “back in my day, things were so much better,” it’s that there was a reason that people that wanted to play level based kitchen sink fantasy were being drawn back.  Many of them had played newer editions.  It wasn’t a matter of being sticks in the mud, of being trapped in time in the 70s, it was a matter of having played newer iterations of level based kitchen sink fantasy games and realizing that they didn’t fulfill the need they had.

There comes a point where knowing that there is a “right” way to build an encounter, and a creature, and that feats, magic items, templates, and the like can all cause tiny course corrections that, taken as a whole, can radically change how the monster works.  That doesn’t even address how allowing one little feat or spell into the game can cause a PC to be wildly more effective than the “baseline” of the game assumes.

The fewer fiddly bits a game has, the less likely you are to see game changing items being introduced.  When everything is transparent, it’s hard to not fully understand how introducing something new will effect the way a monster  (or PC) is run.  GMs that have lots of imaginative ideas, but not much time to double check all of the things that may or may not line up right, were being marginalized.

Before I go any further, let me address something.  I know there will be new school level based kitchen sink fantasy enthusiasts that will point out you could fudge skill bonuses, how many feats something has, or what items they have on them, to make it easier to run the game on the fly.  I’ll contend that this is true, but when you do so, you increase the chances that you introduce things into the campaign that will have long term ramifications  (for example, magic items) or that you will alienate the players that scrupulously detail their characters to work exactly how the game is suppose to work.

Now, back to looking at one gamer at a time.  I can think of plots for adventures over lunchtime at work.  When it comes to level based kitchen sink fantasy games, most of my GMing time would be taken up looking up stats and building things “right.”  Even then, lots of time was spent between sessions figuring out how the magic items I just allowed into the campaign or the new spell from a new book would alter the encounters for the rest of the campaign.

Now that I’ve been out of the GMing seat for fantasy gaming for a while, I really like DCC and 13th Age.  They are like two sides of the same coin.  The coin is, “how do we make fantasy level based gaming work better.”  DCC goes back to the simplicity of the earlier versions of the game, and bolts on some gonzo influence from the original source literature for fantasy roleplaying, along with a dash of unobtrusive “advances” in modern gaming, such as ascending AC and three stat influenced saves.  13th Age goes embraces what 4th edition did, a little hesitantly and unevenly, and throws out a lot of sacred cows and just builds a level based fantasy system that works internally and worries about servicing older concepts of the game as a secondary concern.

Oh, and DCC has the added benefit of being able to pretty easily convert any older edition over to DCC stats in a matter of minutes, and 13th Age has a pretty nice level by level breakdown of how a generic monster should work.

And for me, neither requires the use of miniatures and battlemats.  This means there is less set up time, and less time to scrutinize the exact details of the map, allowing for the action to keep moving.  The fact that there is little set up, and that action can keep moving and be descriptive is a commonality that both games have with Marvel Heroic, even though Marvel Heroic is, in some ways, much more radically removed from the original RPG paradigm with representative dice pools instead of even superficially simulationist rules.

The more things I have to think about that get between me thinking up a plot and presenting that plot to my players, the more I am likely to not like a game.  The things that get between me and that game session better be compelling enough to make me want to fiddle with them.  I can’t speak for anyone else, but that’s how I reconcile what I like and what I want to run.