Our Trip to the Dungeon: Dungeon Crawl Classics Session One–Sailors on the Starless Sea 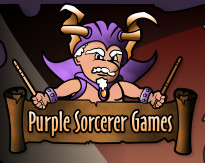 In preparation, I printed out 16 0-level sheets from the Purple Sorcerer Games site.  Now, my table limit was 6 players, because I generally don’t like to break that limit.  While DCC with one character each would likely be really easy to manage compared to some games, when everyone still has multiple 0 level characters, the sheer number of actions means that I’m happy that I stuck to my six player limit. 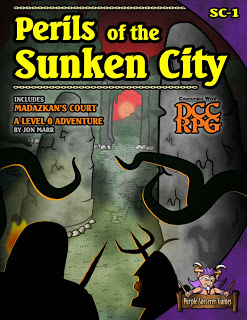 We played through Sailors on the Starless Sea as our introductory adventure.  I was torn on whether to run this adventure or Perils of the Sunken City.  I really liked the overall story of Sailors, but I loved the “home base” and roleplaying possibilities of Perils.  For a while I was even making up my own funnel, but finally, I settled on Sailors. 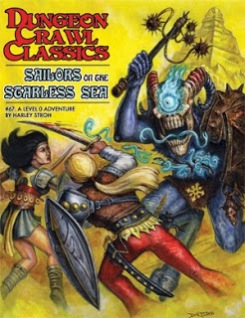 The nice thing is, I’ve noticed that there isn’t a huge difference between 0 and 1st level adventures in many cases in DCC.  The objectives that a 1st level character can manage because they can take more than one hit and have a few things they can do well can almost be simulated by an army of 0 level types really pressing their luck.

Anyway, with 6 players, why 16 0 level sheets?  Because I wanted to make sure if anyone happened to lose their whole array of characters, that they could replace them later in the adventure.  It did come up a few times, but not as often as I had feared.

The adventure itself was a lot of fun.  The story is great.  I will say we had fewer fatalities than I initially had thought we would have, with almost every player having multiple survivors in their groups.  I chalk this up to a few things.

2.  One player managed at least one round of three out of four of his characters scoring critical hits!

3.  I was dumb and forgot to apply the “second half” of the “death and dying” rules to characters that had dropped during a fight, so I was failing to apply the -4 penalty to rolls and the loss of a point of strength/stamina/agility when a character was “turned over.”

Read no further if you plan on playing in this adventure.  You have been warned!

I had each player roll to see what rumor their group of characters knew about the ruined keep near their village.  What was amusing was that most of them forgot about the rumors until something became evident as true or untrue, and they remembered the slip of paper I gave them.

The standard set up for the adventure is that there is a ruined keep near the village that housed an army of Chaos decades ago, and was put to the torch by the forces of Law, and villagers are disappearing left and right more and more frequently, thus causing your not-quite-heroes to venture in and make things right.

As a framing device, I created a slightly different set up.  The village had been set upon by an inquisitor and his hired mercenaries, and the inquisitor is sure that the upswing in disappearances is an indication that Chaos is on the rise.  He wants to put the village to the torch in case they are corrupted, but is giving the 0 level types the chance to purge the keep and find answers before applying the final solution.

This was a fun scene, since some of the players were used to the more “civilized” fantasy RPG set up of at least relatively “fair” governments and religious officials.  Those that picked up on the more traditional “appendix N” feel of the game reined in those complaining about their “rights” as “citizens” before the inquisitor set them all on fire and called it a day.

Now, a few times members of the group asked why they couldn’t just run into the wilderness beyond the keep and leave the inquisitor behind.  I wouldn’t actually have stopped them, and the overall outcome ended up the same for the village, but enough of the group was intimidated by the inquisitor and the fact that he had holy knights arriving to supplement the mercenaries that they didn’t opt for the quick exit for the scenario.

Highlights of exploring the keep: 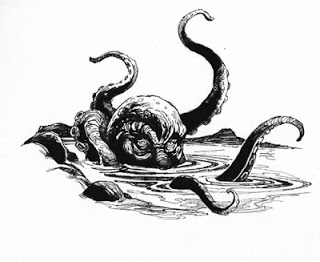 All in all, this was a lot of fun, although I’m left with two thoughts, one about the adventure itself, and one about how I wanted to run it and how it fit into my campaign plans.
1.  The skulls that were available to the PCs to harm the Chaos Lord were a little too effective and a little too easy to obtain.  PCs don’t just happen upon them in the room, but are attracted to the pool, making it more likely they look in, and with a good number of survivors towards the end, that’s a lot of skulls to lob at the Chaos Lord, meaning that he doesn’t get to be quite as devastating as he might seem at first. 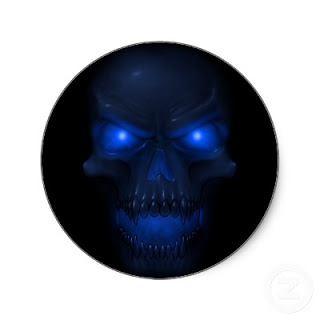 2.  I rushed a few bits of the adventure that I probably should have played out a bit more, such as some of the rooms in the lower section of the keep, and even the ending, mainly because I wanted the funnel done in one night, so that I could “fast foward” the campaign a year for the PCs being 1st level.  Spending even another hour would have made me feel that I had done some of those neat little areas a bit more justice, but it’s still amazing that an adventure with as much in it as this adventure had could be run in a four hour slot.
Looking forward to the next session of the campaign.  I’ve got tons of thoughts, but I have to admit, in all of the holiday hubub, I’ve not done nearly as much work as I had planned at this point in time.  Thankfully, DCC is much more forgiving when it comes to last minute prep than a lot of RPGs.