What’s Going On in the Galaxy? (Edge of the Empire Recap)

I inherited my Edge of the Empire game, and while I wanted everyone to keep going with characters they had already created, I also wanted to tailor the campaign to how my brain works.  The first session was kind of a matter of feeling out the players and finding a direction.  This session was much more about starting the new direction.

Our Twi’lek “face” was tied to Black Sun, but that connection was never really played up.  I thought that might make a nice bridge between the old chapter of the campaign and the new.  It didn’t hurt that the Twi’lek had taken a job from the Hutts while on Nal Hutta, which gave me a bit of lee way for what I was about to do.

The Twi’lek’s boss, a Devaronian Black Sun Vigo, had just been replaced, and he had a meeting with the new Vigo, a Zeltron.  About half the crew went with him, and the other half hung out in the hotel bar in the lobby of the same place where the meeting was being held. 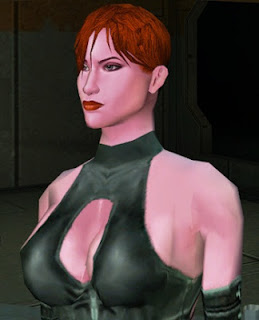 Interestingly, while I expected the meeting to go badly  (the group noticed they were standing on self-cleaning carpet), I wasn’t quite expecting the full on violent uprising that the player characters perpetrated.  This is the point at which I had noticed I had, perhaps, unleashed a few more XP when letting people rebuild their characters than I had intended.

The Vigo and all of her bodyguards didn’t last long.  On top of that, the Twi’lek rode the blinded, crippled Vigo into the secret elevator, berating her into incapacitation.

The other characters noticed Imperial Center Security show up, including a repulsor limo that appeared to house the head of ISB, red uniform and all.  So the group took their incapacitated Vigo, jumped in an airspeeder, to headed for the Industrial Sector.

The group found out that they were all under investigation for racketeering and general mayhem, all of their credit accounts had been seized, and their ship had been blown up on the landing pad and the wreckage was being swarmed by Imperial Security.

Not only did I not quite figure on how competent the PCs were with my slightly over the top XP infusion, I had also assumed that, like every other time in the campaign, someone would be posted with the ship, who would then have a chance to notice the bomb and disarm it.  Since no one stayed with the ship this time, the ship . . . went away.  This is especially notable, since in my Star Wars Saga game, with many of the same players, the group failed to notice a group of Sith commandos with stealth field generators that . . . wait for it . . . set a bomb on their ship and blew it up.

That means that in Star Wars I’m as well known for blow up ships while the group is off adventuring as I am for dropping caverns on people after the BBEG is defeated in fantasy RPGs.  I hate having a predictable pattern!

In the meantime, the Squib merchant got a tip that he could find out where his mentor had been sold into indentured servitude if he met with some nefarious types that wanted him to sell a mysterious box.  I’d like to say what followed was completely intentional on my part for the sake of comedic effect.  This would not be true.

The nefarious guys were very vague with their instructions about selling the box to someone.  Before they could further elaborate, the Squib had sold a BD 3000 droid from the Vigo’s office to the nefarious pair, and the pair had given the Squib some Gamorean muscle to help him sell the mysterious box.  The Squib then handed credits to the Gamoreans, convinced them to buy the box, and told the nefarious group of men that he had sold the box and that he wanted the information now.

The stunned, dizzy, overwhelmed criminals decided to give the squib the datapad with the information without any further protests, and tried to figure out who and how to move the box in a manner that would never involve dealing with Squib ever again.

In the meantime, Prawn the Rodian pilot/slicer slit the Vigo’s throat and dumped the body in one of the smokestacks in the industrial sector.  While the group was discussing what to do next, now that they had no credits, no ship, and were on the run from the law and Black Sun, they received a message from a representative of the Zann Consortium, who offered the group a new YV-664 freighter if they would take a job.

That’s where the night ended.  I wish I could say that I was going to get to continue the story this Thursday, but I’ve got to come up with some interim adventuring for those not already engaged in Valentine’s Day festivities.

Thoughts on the game: