I have seven players in my Edge of the Empire game.

So of that group, Sleerin and Rak are definitely faces, and Max can certainly pull face duty if he needs to do some talking.  The others, not so much.
Last session, for Valentine’s Day, we were short Sleerin, Rak, and Max.

We left off last session with the group being recruited by the Zann Consortium to do a job as yet not detailed, and Sleerin negotiating for some upgrades to the YV-664 that the group is getting from the Consortium.
While 3/7th of the team was gone, I decided to have one of the Zann Consortium toughs challenge the remaining characters to a test to prove that they had stones the size of a Bull Rancor’s, which they were going to need for the job they are getting hired on to do.  The team needed to boost an airspeeder and convince an underground racing circuit to let them race in a dangerous, illegal race.  They didn’t need to win, just prove that they had been in the race and survived.
(I’ll edit out the discussion of how visible a Bull Rancor’s “stones” might be since it’s a “reptomammal,” as opposed to a full reptile, and how that relates to the “stones” of a Trandoshan.  Have to love gaming chatter.)
The group has few credits and no ID  (or at least no ID they can use, without getting picked up by Imperial Center Security).  Osskwo and Tash were discussing the finer points of boosting a vehicle and where to do it, while Akkit just headed out to do it, and Prawn followed him to keep him out of trouble.
Akkit did a fine job of sneaking up to the speeder unnoticed, and Prawn caught up to him and used the com link to keep an eye out for him.  Akkit disarmed the alarm and hotwired the airspeeder in broad Coruscant daylight, but Prawn, unfortunately, stood out a bit as a Rodian in an nice, upscale neighborhood. 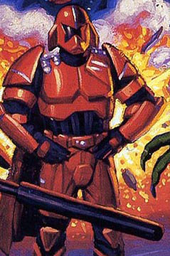 Prawn was carrying a rifle, and could not produce ID, so the Coruscant Stormtroopers that happened upon him  (a dozen) assumed he was a threat, and began to beat him mercilessly with stun staffs.  I had originally thought that the whole team would go together, rather than a single member of the group facing a dozen Stormtroopers, so Prawn now has nightmares about both needles in the back of his head  (an unfortunate moment with the team’s former assassin/medical droid and a stim pack administered at a crucial moment with little bedside manner) and a dozen stun staffs flashing blue and shocking him into oblivion.

Akkit is a great sneak and thief.  Piloting not so much.  He manages to fly by Prawn as he takes off and snags him with a hooked bungie cord, but can’t pull him back into the speeder, and manages to fly around in a circle right over the troopers.  The troopers pile into their speeder to give chase, and Akkit flies a giant loop so as to drop Prawn into the speeder, and manages to slam into a landing platform, damage the speeder, knock himself unconscious, and allows the speeder to fly uncontrolled down several levels to crash into an alleyway in the undercity. 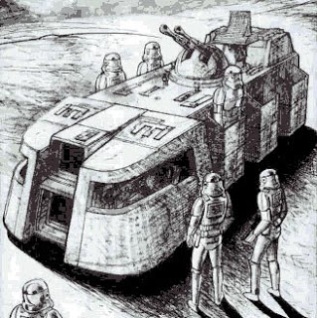 The troopers loose the out of control speeder before it crashes, but Prawn and Akkit are unconscious in a dark alleyway, in one of the less savory neighborhoods in Coruscant/Imperial Center.
After working on an actual plan, Tash and Osskwo head to a run down neighborhood in the Undercity.  Instead of trying to sneak up to a speeder and steal it, Osskwo (making a Cool check), snarls at anyone keeping an eye on him and looks like he belongs in the rough neighborhood, and anyone on the street avoids him.

Osskwo and Tash find a booby trap on the speeder, and Tash sets it so that it can be triggered later on.  He then tinkers with the speeder to make it more maneuverable, and the two set off to the races, set under a trash processing plant.

Since the pair weren’t invited to the race, the race coordinators set their security droid on the pair to see if they check out and if they can impress the droid.  BA-22 tells them to get lost unless they can prove that they belong in the race, and Tash  (who “speaks Binary”) helps Osskwo glower at the security droid until the droid is sure that they will at least have enough bravado to be entertaining during the race, and signals the coordinators that they “seem legit.”

The racing circuit flies under the processing plant, which drops metal shards from broken down machinery onto conveyors, and also, from time to time, drops a stream of melted metal from the recyclers into basins on the next lower level.  So there are hazards to avoid, and the racers, since it’s an underground circuit, are allowed to “make things more interesting,” which is code for allowing the teams to shoot at one another.
Right out of the gate, the player’s speeder starts out faster, but the other team fires on their speeder, their mechanic scores a couple of nasty shots to Osskwo, and the teams dodge the first load of metal scrap from the sky.
Both airspeeders avoid the scrap, but the other speeder pulls ahead.  Osskwo fires a well placed shot at the pilot, who miraculously survives the blast  (he’s a Nemesis, and I spend a fate point to reset his wounds and gave him a critical).
The molten metal falls out of the sky, and Tash and Osskwo dodge it.  Tash uses his “Bad Motivator” ability to stall out the opponents.
Then the spiral starts.  The pilot botches his first roll, and everyone takes damage from the molten metal.  This takes out the gunners, but the mechanic and the pilot are fine.  But the bad motivator stalls out the airspeeder, and they attempt to avoid the molten metal again, to no avail.  The mechanic is now gone, and the pilot flips another fate point to reset and take a critical.
That critical causes him to take damage from the same source again.  Which causes him to flip another fate point to reset and take another critical.  Which causes him to take the same crit again–receiving damage from the same source again, which not only takes out the pilot, but does enough structural damage to the airspeeder that it blows up.
So the pilot hits the molten metal, loses his crew, has a problem with the ship, stalls out, circles around the molten metal again, watches his mechanic burn, and circles around again, right into the stream of molten metal, and explodes, with his boots full of liquid durasteel.

To win, Osskwo and Tash only need to survive another hail of shredded metal from the sky, which they do, and return victorious to the Zann Consortium front bar.  And then realize that Akkit and Prawn are still missing. 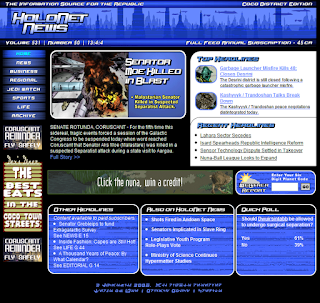 Watching the Holonet, they manage to find a newsfeed about an unidentified Rodian hanging from a stolen airspeeder that crashed into the Undercity earlier that day, and the two spend hours trying to follow the trajectory from the news, until they finally find Akkit and Prawn, naked and robbed of anything remotely valuable.
Earlier I had rolled for Akkit’s obligation to come up in this session.  Akkit is just obsessed with crime.  He has an urge to commit random, dangerous crimes, and if he ignores them for too long, his obligation goes up, and the random minor crimes he has committed catch up with him and make it harder for everyone.
So Akkit, having recovered one single wound and naked, goes on a crime spree.  His first impulse  (as per his obligation) is to steal something shinny and potentially not immediately helpful, so he sneaks into an upscale shop, past its security, to steal a portable handheld rock polisher.  Top of the line, too.
Then he sneaks into a gunshop to get back an ion blaster and something for him to do more deadly damage with as well, all the while upset and swearing revenge about losing his upgraded, tricked out blaster.  Finally, he steals some clothes off of a homeless man in an alleyway because the clothes “smelled about right” to be fashioned into Jawa robes.
The party then returns to the Zann Consortium bar to hear the final details worked out between Sleerin, Max, and Rak with the Consortium representatives.  Prawl has vowed not to keep Akkit out of trouble in the future.