What I Learned About Campaigns from Watching Sliders

My wife and I recently canceled our cable, as we realized that we spent a lot of time finding series to watch from beginning to end on Netflix, and when we weren’t doing that, we were watching the same syndicated television over and over again from the time we turned on the TV.

My wife wanted to watch Sliders again, as she had always liked that show, but neither of us had watched much of the later seasons of the show.  As we did, some thoughts about ongoing campaigns, themes, changes, and when to let go all occurred to me.

Spoilers for the Whole Freaking Series  (Do I Still Have to Say this for a Series from the 90s?)

For our purposes, let’s define what jumped out at me.

You have a series with a set cast of four people.  The original concept was that they are all from the same place, start jumping around dimensions, trying to get back to their own, and have adventures in between on strange worlds.

So as the “campaign” starts, you have the whole cast with a common origin, i.e. that they come from the same Earth, and you have a common purpose, getting back home. 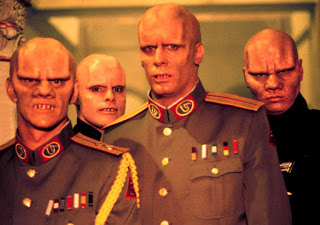 Eventually the plot thickens, as a recurring set of villains are introduced, the Kromaggs, who could show up and create a meta-plot.  Regardless of how you might have felt about this addition, it’s something that’s not uncommon to a campaign.  The longer it goes on, the more you might feel you need more texture in the ongoing narrative than just that “everybody wants to get home.”

Now everybody wants to get home, and they all have the same bad guys to personally rail against.

Eventually, though, you also lose a few cast (party) members and replace them with new cast members.  One of the new cast members may not have the common goal of returning to the same Earth, but they don’t have a homeworld that they want to go back to.  Another cast member, introduced a little later, has a direct personal tie to another character.

Finally, you have the last permutation of the team, with one of the original cast members gone  (but very tenuously connected, by yet more meta-plot, to the new guy introduced), and one of the new characters tied to that character leaving, and another new character introduced that has the same “hook” that the second generation member of the team had, i.e. she’s not going home, but she doesn’t have a home to go to, so why not go back to the home of the one, single, solitary guy that has ties to the original Earth that the show started from.

In my personal opinion, by the time the show ended, a lot of the cohesion, chemistry, and fun of the show had been wrung out of it, and the ending was just sad.  Not sad in an effective emotional storytelling kind of way, but sad in that you have a hard time believing the show ended that way.

But how does this relate to campaigns?

When one member of the original cast leaving, the show didn’t lose too much of the party chemistry.  When two members left, it was getting iffy, but the show had a fairly good hook for the new person, i.e. that she was from an Earth she wasn’t going to go back to.  When the next new addition was added, the meta-plot was kind of painful, but introducing a long lost sibling at least created some automatic emotional connection.

The problem comes when you introduce a second person with the same hook as the first one to the party.  Another person that has the “I can’t go home so I’ll help you” isn’t unique anymore, especially when she is also the “we need a scientist character to work on the Timer” character.  And when you try to replace the lynchpin character  (more on this later) with someone that has “some” of that character fused to him, but is pretty much a new character, it’s hard to care anymore.

None of us want to see players leave, but sometimes we can’t help it.  More controllable are character deaths, but sometimes, even those can’t be helped, or ignoring them will damage the campaign more.  At some point you have to sit down with your players, talk about how much has changed, and address the real possibility that it may just be time for a new campaign.

I may be slightly misapplying the term meta-plot here, by which I mean not so much an overall push for the setting to change with or without the players, but the very high level overarching story of the campaign, not the plots of the individual adventures or even three or four adventure story arcs.

Long term campaigns will develop meta-plots.  When you play in the same setting, and similar themes and characters show up, this is actually a good thing.  However, there is a danger of having those meta-plots start to run counter to the nice, simple concept that the campaign started with.

It’s really easy to see how a simple plot like, “let’s keep sliding until we get back home” can start to feel thin after a while.  But introducing a race that can slide more effectively and threatens your home world, thus creating more of an impetus to get home, can come dangerously close to changing the whole premise of the campaign.  The new plot element has to be used lightly, or the focus and feel of the campaign shifts.

The most dangerous meta-plot trap of all is to fall into a meta-plot that is so important that it affects the whole campaign, but doesn’t focus on the party equally.  Granted, you can usually get away with this in movies, because you know your “chosen one” is there for the whole thing.  However, television can be a bit more like a campaign in that your actors may not sign on for the long haul.

Making one character the chosen one, or having a huge plot point revolve around two player’s parents, can be a big issue if they leave the campaign.  Suddenly, a lot of the drive in the campaign is ripped away.  Even players that might not have realized just how much they were playing second fiddle suddenly realize it when the whole campaign grinds to a halt.

Think of it this way:  if the party paladin is on a quest to kill a dragon that is the ancient evil of prophecy in his religion, and he is reincarnated as a thief that really doesn’t care, but the party is expected to all decide that fighting the dragon is a good idea, how much emotional investment does that spawn in the party?

And at some point, if your meta-plot gets too heavy, look for an exit, not more meta-plot.  Talk to your players about how you can wrap things up in a satisfactory way  (see the next point), and don’t be afraid to end it.

How To Say Goodbye

There is a huge temptation to leave the door open to more adventures.  If you have the chance to give your players an epic ending, take it.  Give them a payoff.  Let them hang their hats on One Big Thing, and then walk away.  Worry less about leaving the door open than going out with a bang.

You may want to use these characters again someday, but odds are that you will have a long time to think of how to do that, in a way that doesn’t occur to you now.  It may never happen, but if it does, it’s not something you need to be able to do right now.  So don’t half-ass your crowning moment of awesome for some theoretical reunion.  Give your players a reason to want to have that reunion, because of the fond memories.

Trust me, I’ve screwed up campaign endings before.  I’m not saying this as someone that always gets it right, but as someone that has often felt that he wished he could have changed that last adventure to do things a little differently.  There are always going to be times when you can’t give your campaign a proper ending, so when you get the chance, make the most of it.