After our exciting race last session, in order to keep things nice and balanced, the “face” side of the team got to prove themselves to the Zann Consortium.  In this case, our Force sensitive Squib trader and the Twi’lek wiseguy got to take center stage for the first part of the session.

The pair was given a mission to convince a reluctant Corellian shipping magnate to work with the Consortium running guns.  They had to meet up with him in an upscale Corellian style restaurant on Coruscant and convince him to take the shipment, and negotiate the terms.

Before they went to talk with the magnate, however, the Twi’lek decided to visit a Snivvian information broker that he knew to try and find some personal information on the Corellian shipper.  The Squib bargained the Snivvian’s price down, and made a good impression to boot.

Not only did they find out the information they were looking for  (personal information on the shipper’s family), but they found out that he had a mistress as well.  Armed with this information, they decided to head to the restaurant.  At which point they ran into the shipper’s bodyguard, a Echani mercenary armed with a force pike. 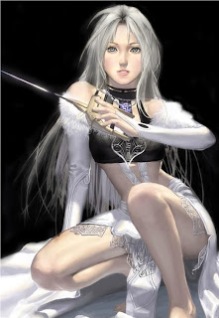 The Echani was an intentional call back to a previous campaign, where the party Jedi mind tricked an Echani into giving them information, and she showed up later in the campaign to kick in his teeth.

Strangely, the Echani found the Squib to be adorable and cuddly, giving the group time to talk to the shipping magnate.  After presenting the shipper with the whereabouts of his family, and then talking about how unfortunate it would be if his wife and mistress showed up at the same hairdresser, the shipper caved, and negotiated terms with the Squib.

The whole team having proven themselves, the group got their first look at the “big picture” that the Zann Consortium wanted them to accomplish.  Two feuding Moffs enacted embargoes against one another.  One Moff wanted droids from the other Moff’s territory to retrofit his large fleet of smaller capital ships.  The Moff hired smugglers to pick up the droids and deliver them to his to work on his flagship, so that his fleet could be slave rigged and more efficient, in a effort to make his rival look worse to Imperial Center.

The Zann Consortium wanted the PCs to impersonate the hired smuggler, pick up the droids, take them to the Moff’s command frigate, and then upload a program to the droids that would indeed allow them to slave rig the ships, but then would jump them to a point in Wild Space where the Zann Consortium can hijack them and acquire a small fleet of lower end capital ships.

Tash, one of our human Imperial sympathizers, was a bit torn on this mission, but decided that the Moff deserved what he got for feuding with a fellow Imperial, and felt better about the mission.  On top of this information, the Squib found out that his master might be on Raxus Prime in the Outer Rim, and the Twi’lek received a belated message from his dead boss instructing him to pick up a briefcase on Zeltros.

The group decided to try and do this quick, so they headed for the droid factory, putting aside the other leads for now.  Upon arriving, another crew of “independent shippers” that knew the crew (that the team was impersonating) showed up, and they attempted to blackmail the crew.  The disguised Tash managed to randomly pull the actual location of the real crew out of his void by guessing that the crew had cut short their vacation on Zeltros to make the delivery.

Unfortunately the crew forgot to plot an alternate course out of the system to deliver the droids to the embargoed system, and the local customs corvette extrapolated their course, and ordered them to stand down and prepare for boarding.

Not wanting to answer questions or be probed, the crew took off, trying to put some distance between the two ships and jump out of the system.  We got to have some ship to ship combat, and tried out the old cannons.  The Trandoshan got a few shots in on the corvette, and the YV-664 took a few licks, and everyone got used to space combat a little.

One big thing that is going to take some getting used to is the fact that accelerating does not equate to changing range bands  (i.e. you can be flying faster within the same range band, like a ship circling another in a dog fight), and it also took a bit of explanation to get everyone used to the limit on pilot only actions on a ship.

The group showed up in the rival territory, and the Moff’s ship informed them that the warrant on their ship was being listed as regional, due to their “boss’s” influence, and so they only needed to worry about travelling in original territory where they picked up the droids.  They were then directed to the command frigate to set up the droids.

The team set up the droids, but the Rodian made some mistakes on his programming check, and got a ton of advantages, but a net failure.  I let the team leave the ship, and then had the other smugglers show up (the blackmailers) to refute their identities, since the other smugglers had time to call Zeltros and find out that the real crew was still there.

I’m not happy with how I resolved this situation.  Initially I wanted to have the PCs have to fight their way out of the frigate if they set up the program improperly, but as we were getting close to the end of the night, I didn’t want to start another fight, but I still wanted their to be consequences for the failure.  So I set up the cliffhanger ended.  I could have had the stormtroopers pulling blaster rifles on them as a cliffhanger, but I liked leaving them multiple options for escape instead of just an impending firefight.

Still, I didn’t like that the failure consequence that I handed the players was so disassociated with the roll.  There is no way the programming check had caused the smugglers to show up.  The best I can come up with is that the programming took so long to set up that it gave them time to show up.  In the end, however, what I really did was do something with a failure that I should have done with accumulated threat instead of a failure.  Not happy with my own decision there.

I really like how the mechanics work for generating story elements.  Not just explaining the threats and advantages and how they explain how well or poorly your action worked out, in addition to simple success and failure.  I like the elements that arise from spending fate points.  The Snivvian wasn’t just an information broker, he was an old associate of the Twi’lek’s that had worked with him before.  I like how the mechanics help to remind you to define elements in that way.

The game system wasn’t really the villain in any of this.  I made some GM faux pas that I’m not thrilled with that I’d like to avoid in the future.

The first one is that I’m having a hard time making sure that all of the players get a chance to do what their characters are good at in various encounters every session.  Last session I did a better job of letting the techies, stealth guys, pilots, and combatants shine, but now that we had almost the whole crew together, I did a much poorer job of making sure we had a “sure thing” combat encounter for our combat oriented character, and those that lean that way.

The game system is good in that it allows for resolving a lot of non-combat situations so that you can run a game where the faces and non-combat types have good options for resolving situations, but it’s too easy to forget to “hard wire” some combat in.  Not only does that make sense for the needs of the combat style PCs, but it’s also much more Star Wars.

Finally, I’m not thrilled with the final encounter, as I spelled out above.  Specifically, I’m not thrilled with the fact that in order to give the PCs more options at the start of next session, I essentially railroaded them into a single story outcome that broke the conventions of the game.  I don’t want to burn their trust in me as a GM by enforcing arbitrary story options after having them roll for a resolution.  They deserve better than that from me, and at this point in my GMing career, I should know better than to do something like that.

So while I’m happy with how the session played out, overall, I’ve got some work to do as a GM to fix the problems that I, personally, created, and some long term work to do to reassure the players that I won’t make those mistakes again in the future.