Before I start, let me just say, spoilers of Perils of the Sunken City from Purple Sorcerer Games, should you still be a stranger to the pages of said folio.  Ye have been warned. 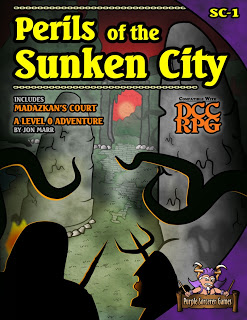 When last we left the intrepid band of adventurers in my Dungeon Crawl Classics game, they had been paid off to head to the Great City, and wandered into Muster Town, home of low level adventurers in the collapsing Sunken City ward of the city.  There, they got horrible fortunes  (except their henchmen, who is apparently bound for greatness) and used the Sending Stone to arrive at the ruins of an ancient area.

Brother Wilbur, cleric of Cthulhu had ventured under the floor of arena, ran into a mob of skeletons, and after turning two of them, the rest battered him into a sound sleep.  His companions spent a while trying to figure out how to get past the spikes and the electrified plate at the bottom of the arena, until Aelantha, the non-mutant elf, determined that the corpses of fallen opossum men are insulated and useful to walk over.

Safely arriving under the arena, there was an epic, pitched battle against the skeletons that had violently induced Brother Wilbur’s impromptu nap.  The chain wielding skeletons dropped Undrel the Henchmen, and did grievous harm to others in the party.  I’ll admit to being a bad Judge at this point, because I lost track of exactly which encounters caused “near death,” other than to remember that it happened a few times through the night.

Because there were holding cells in the area under the arena, the group decided to lock themselves into one of them and rest so as to give themselves time to heal up.  Brother Wilbur’s injuries were such that he could not be awakened  (and his player was gone for the night).  About a day into their rest, I had them roll some luck checks to see if anything found them.

There is an area in the adventure where a multitude of slugs are singing and worshiping a pair of purple slimes, and I ruled that staying in one place for too long, the slimes may have ventured forth out of their fountain, and a pitched battle ensued.  After lots of sloppy wet noises, victory was gained by the PCs, and they went about resting again.

A few nights later, they were awakened by a procession of sad singing slugs that had made a pilgramage to the site of the death of their gods.  The PCs were suitably haunted by the dirge singing slugs, but they managed to forgive themselves for killing the slimes.

Once they started exploring again, Drewman, the halfling, wandered away from the party and found a huge cavern that led to a beach filled with glowing crawfish and with an island on the other side of the water in the cavern.  Drewman was about to go to town on the crawfish, being an excellent chef and all, but realized that he was alone and unlucky, and small enough to be an appetizer.

Granshee, the heavily mutated elf, found a secret door, and the party found various and sundry delights and adventuresome rooms.  The group had a lot of fun figuring out ways to break open several jars that were either filled with coins or deadly poison gas.

Eventually the group found a room in which was planted an evil tree, grown from seeds procured from the Abyss.  It promised to give Granshee secrets if he would make a sacrifice to the thing, but Granshee, being at least somewhat prudent, decided that a tree would have a hard time running from fire, and so used his magic ring to burn it down from the hallway.  Then the group gleefully looted what was left of the dread hellwood.

Perhaps the most beloved treasure found in the arena was the set of magically enhanced towels that cleaned themselves whenever they were shook.  Everclean towels, what every adventurer seeks.  Undrel considered retiring, but then thought that becoming a king might top have a magic towel.

In the cavern wherein lay the island, the group pondered long and hard to figure out how to best the giant mutant catfish that swam the waters around the island.  They went back to the library in one of the chambers and made a boat out of bookshelves, and crossed the water, but the catfish took its toll.

On the other side, the group read the journal of an adventurer that died on the island, apparently after speaking with the fish, and decided the journal was hilarious and would be a nice gift for the old fortune teller in Mustertown.  They then set about devising elaborate plans to best the fish, once again, but this time, Drewman amazingly pulled the fish onto land long enough for the rest of the group to fillet him.

There was much fish jerky made by Drewman for provisions, before the group returned topside.

The group decided to explore the viewing box in the area, which they previously skipped, and after several of the adventurers injured themselves by failing to climb the wall, Aelanthea again proposed that the opossum men bodies not only insulated, but provided a cushion for falling adventurers, and the group found the treasure in the viewing box, which included the robes of a former lord of the Great City and his rod, which would have controlled the skeletons below.

Their desire for adventure satiated, the band of rouges headed back to the stone that would send them back to Muster Town.  After the disorienting teleportation, they dropped off their gift with the old fortune teller, and were then accosted by a band of elves, offering to pay 5,000 gold coins for Granshee’s magic ring.

Granshee knew that the proper response to someone offering to take a magical ring is to clutch it close to one’s body and make threats, and did so.  The elven adventurers that attacked the party were well versed in the art of monologue fighting, and as such delivered enough exposition during their battle for Granshee to learn that he was wearing the Ring of Sezrekan, the ring of a powerful ancient sorcerer, that the elves held as a patron.  They claimed that ring had more powers than Granshee realized, and that it was far more useful to them, as traffickers with Sezrekan.

The elves all died horribly, as is the lot of those that attack protagonists, and the party relaxed and began to count their loot, until they realized that Brother Wilbur had been unconscious for days at this point.  Worried about him, they speculated as to his health, but then a tentacle came out of his nose, patted him on the head comfortingly, and the party knew that he would be alright the next time they were ready to adventure.

Oh, and the elves have a globe with the trapped souls of three wizards in it who are bound to teach them spells, which the picked up off of the dead elves that assaulted them.