I wanted to save the Multiversial Doomshifter for its own entry, because, well, it has charts.  The Multiversial Doomshifter is a series of nested glass spheres with various points of light on them.  When firmly held and shaken by a user, the various nested sphere spin around until a single point of light from each of the nested glass spheres lines up, at which point the lights that are lined up flare, and the Doomshifter is activated. 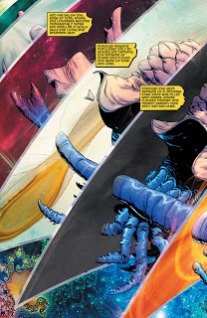 Because the Multiversial Doomshifter is playing with cosmic consequences, there are both karmic prices to be paid, and the potential for the new body to have significant differences from the old body.  When the Multiversial Doomshifter activates, it hovers in the air, begins to glow, and opens a rift into the multiverse, taking the body with it, and beyond the ability of it’s original user to activate again.

02-50–Slipped through the cracks; you switch places with someone of minor cosmic significance and loose one point of Luck.

51-99–Screwing with destiny; you switch places with someone of great cosmic significance in their own universe, and because of your meddling, you lose -2 Luck, but you are alive again.

00–Cosmic mistake in your favor.  Turns out you weren’t suppose to die, and you swapped places with someone who was, so all balances out in the end, and you are alive again.

02-50–Your other self was reprehensible and inconsequential to anyone.  No luck change and you are still alive.

51-99–Your other self was well loved or generally more important that you are.  -1 Luck, but you survived your brush with death.

00–Your other self was either a Champion of Law battling out of control Chaos, or a Champion of Chaos, battling entrenched Order.  You ruin that universes chance to return to balance, and you suffer a -2 penalty to Luck, but you survive.

02-50–There are a lot of you doing a lot of things and nobody can keep track of where.  Nobody really notices that you swapped yourself with another you, and you take no Luck penalty and survive.

51-99–Your other self was a Champion of Chaos or a beloved trickster.  -3 to Luck because robbed a powerful cosmic force of their agent or primary amusement, but you survive.

00–Some force of Chaos is amused that you managed to escape death when you should have fallen.  Your live and gain +1 to your Luck score.

6–Afflicted  (-1 to strength, agility, or stamina)

7-8–Pretty much the same

14–Roll three times on this table