Our team landed on the manufactorum that was our objective.  We were all ready to go.  We were attacked right at the outset, by things that had piston driven jaws.  I’m not entirely sure how that went, because Brother Cervantes failed to set them on fire at the outset, and then was promptly dropped into critical damage, and immediately failed his check to avoid bleeding out.  Very short career that one.

I could have spent the Fate Point, I guess, but it seems odd to spend the one and only Fate point in this manner, especially when I’m not spending it to remain with a group I’ve been operating with for a while.  I’m not sure, maybe I should have, but in the long run, it really didn’t matter all that much.

The rest of the group stalked into the Manufactorum, following suspiciously opening doors and well lit corridors.  None of our characters knew this, but the Sarge was being urged on by his sword, which was inhabited by a Daemon of Slaneesh.

I made up a Tech Priest Engineseer who was amazingly tough and friendly, and not as smart as you would expect from an Engineseer.  The group fought off some minions of Chaos, and then they freed my character, who was apparently from an earlier unit deployed to this site.  They kept my Engineseer alive to question about the workings of the Manufactorum. 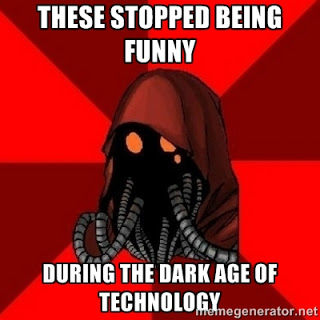 My Engineseer also had the “Joker” trait.  I figured it went with the high Fellowship.  Essentially, somewhere down the line the Tech Priest had been informed that humor could be effective in maintaining morale for a military unit, and attempted to access humorous comments.  Generally this didn’t work too well.

The Engeineseer was also trained in Medicae, which meant that he had a theoretical knowledge of how to attempt to apply repair techniques to organic tissues.  In practice, he rolled really badly twice, attempting to bolt one guardsman’s wound together, and misapplying his hot glue unit for another wounded ally. 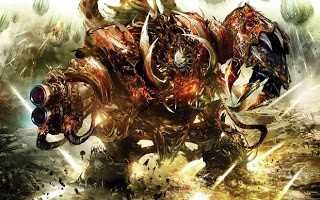 Now, I know that Sarge had passed out, and that the psyker had taken cover behind him, and picked up the sword.  I know the sword was really fond of the psyker.  I know that we ran into something else in another room, but I cannot remember what that thing was.  Ultimately, it doesn’t matter, because here is what happened. 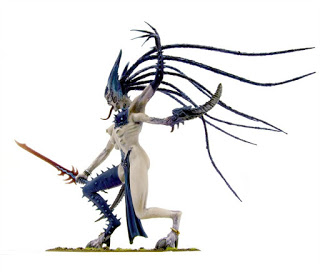 The surviving party members were all pretty much struck catatonic by the Keeper of Secrets when it arrived, and since the whole party was catatonic, it was pretty clear what was going to happen.
At this point, we decided that with two TPKs and just about every player having had multiple characters, the Shadowcocks were pretty much a cursed regiment.  Next session we’re either going to make a new regiment, or pick an existing one, and start over from there.  Good bye Shadowcocks . . . you may have been failures, but you were epic failures.