All of this comic book movie news out SDCC got me to thinking about one of the properties that apparently didn’t get discussed much.  In case you missed it, Rob Liefeld let slip that an X-Force movie is in the works, and that Cable and Deadpool would be essential to this version of the team.

This got me thinking about how Cable really is an interesting character.  I know Mark Waid used him as the poster boy for everything that was wrong with the 90s by reskinning him into Magog for Kingdom Come. I love that story, but like anything else, Cable himself was just a tool that happened to get used a certain way in the 90s, like many other characters.

For movie purposes, let’s streamline the essence of who Cable is.  While I fully embrace comic book weirdness and endorse its transposition onto film, there is nothing wrong with identifying the high notes and running with those, since, you know, you aren’t going to fit 20 years worth of stories into a two hour movie.

So at his heart Cable is Scott’s son from much further down the timeline.  Despite being the son of two powerful mutant bloodlines, his own mutant abilities are hampered by injuries  (we can skip the specifics of the techno-virus to the time being).  In this future, Cable has been fighting Apocalypse, who pretty much owns the world and has remade it in his image.  Cable may not be able to utilize all of his powers as well as his lineage would suggest, but he’s trained killer badass of epic proportions, so as long as he can get his hands on a weapon, he’s going to be dangerous.

There are two things that make Cable interesting that have often been muddied by creators working with him.

One of the things that made Cable look like the poster child for 90s excess is that he was a killer soldier in a super hero world.  But that same thing actually makes him fascinating, if it weren’t for the fact that every other character in the 90s started moving towards the militant killer badass model themselves. 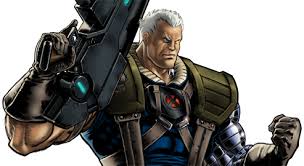 Contrasted with normal, day to day superheroes, Cable becomes much more interesting.  Cable is a soldier, used to war, and his use of lethal force isn’t about superheroes being “wrong” or “soft,” but rather it comes from the fact that Cable was never a superhero.  He was always a soldier fighting a war for survival.  There may be times that Cable is upset over letting someone survive, but there are also going to be times when he appreciates that a common thug doesn’t need to be dispatched with extreme sanction, and a good creative team is going to have fun showing that thought process.

Cable is also the walking, talking epitome of the “what if we killed Hitler as a child” conundrum.  Cable knows history, and while people in this time might see Sentinels as a horrible thing in the short term, Cable is going to be torn, knowing that if mutants survive this onslaught, the strongest of them might survive to take on what’s next.  Again, a creative team with the discipline and imagination to use this sort of story element is going to have a field day with Cable.

Do I have faith that Fox will use Cable as well as he could be used?  Well, first, let’s look at the previous X-Men movies.  Then let’s look at the fact that Rob Liefeld is apparently consulting.  Fox seems to have an amazing capacity to build up a lot of hype and fail as they cross the finish lines.  In fact, I’d argue that Fox’s biggest wins when it comes to the X-Men movies have always been in casting.  Storm being an exception.