The road to Civil War leads ever on.  For anyone interested in seeing the campaign first hand, here is the YouTube video of the last session of the event:

The highlights of the night included the following: 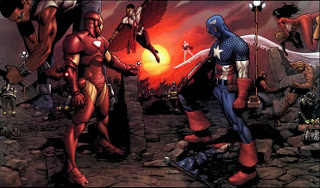 Iron Man, at Project Pegasus–“I’m not playing Good Cop, I actually don’t think we should torture the prisoner.”
I’m pretty happy with how the event is moving along. We’ve got some bits in place that I can use as the Watcher to personalize the event.  Now I just need to start moving the event closer to resolving Act One so we can get to the heart of all of the conflict, and figure out if my ideas for Act Three  (which, IMHO, is the weakest part of Civil War) will work out in a satisfying manner.