Sadly, we reached the end of our Only War campaign this last Thursday.  Even more sadly, since we had to TPK twice and then start over, meaning we only got a few sessions with these new characters.

For anyone that missed the last recap, our penitent legion had been sent on a mission to set up a laser beacon on a building in a city held by orks.  Upon arriving, we realized that this planet was actually our own home planet, even though we hadn’t been informed as such.  Our Chimera had the armor blown off of one side of it and was moving a little slow, and we got a little sidetracked.  Helped some natives that told us the orks were having them help build the cities for them. 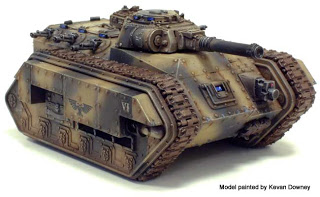 We show up late for the party, with other imperial guard units besieging the city full of orks themselves.

Recap firmly in place, we skip to the current session.  We have a barrel of acid.  Together with our breacher, my field chirurgeon consults on how well the acid would work.  I’m a bit optimistic about how powerful it is, but the breacher and our operator use it to make a hole in the wall that we can drive the Chimera through, and we hightail it to the building where we need to set up the beacon.

We set up operations in the bottom floor, and our breacher and operator set up lots of booby traps and explosives around the Chimera.  We start making our way up the floors to scout out on our way to the roof.  The field chirurgeon is going second rank to help out anyone that gets wounded.  Which ends up being everyone, by the end of the fight.

In marked contrast to previous nights, our penitent legion actually methodically clears rooms, opening doors, throwing in grenades, slamming doors shut, and waiting for bad guys to come out.  There were, of course, two exceptions to this generally organized and efficient means of doing things.

1.  Our very first fight, when orks just can rolling down the stairs at us, involved a plasma cannon, and a blast radius.  It worked, but it hurt.

2.  One of the rooms we were clearing got a hole melted in the door by our sentry.  The hole was big enough for squigs to pour out of, and one of them nearly ate it’s way through his chest.

Eventually we ran into a room full of cyborks and a mad doc, and one of the cyborks fell on top of our sentry, who couldn’t move until we helped him out later on.

Our sharpshooter scouted ahead once, again recalling old habits, and got blasted for it.  I healed him, and our breacher attempted to use an ork head as a puppet to convince the orks in the buildings on either side of ours that the orks from the other side had shot at them.  It almost worked, but it also got the breacher’s hand shot by crossfire.

Eventually we made our way to the roof.  It was clear.  Nothing around.  Except for tons of orks on a nearby building, and a Weird Boy that levitated the whole crew to our rooftop.  Many explosions and much shooting happened.  The sentry died.  I did some healing and some convincing that wounds weren’t that bad.

Then after the sharpshooter melted the brain of the Weird Boy  (almost melting us in the process), the Storm Boyz showed up with their jet packs, and we started all over again.  After that fight, we set up the beacon, camouflaged it, and ran for the Chimera, and our operator got us out of the city before it was reduced to rubble.

1 fatality  (2 if you count his comrade), 1 successful mission.  Not bad for guardsmen.  It was a nice note to go out on, and I’m going to miss the game, in general, even if I never quite got a character in place for the long term.  I think I would enjoy it, but we seemed to be especially prone, at least with our first regiment, to making unwise decisions that led directly to our demise.

We did us a trial run of the resolution system spelled out in Dark Heresy 2nd Edition, as our GM has been reading that.  In short, whenever resolving an action, if you are successful, you get one degree of success, then you subtract the tens digit of your roll from the tens digit of the target success number, and those are your additional degrees of success.  I like it, myself, as it was a bit faster to figure, and worth the lost of some “accuracy.”