Loki’s getting his own series.  To commemorate that momentous announcement, I thought I’d throw together a couple of milestones for Marvel Heroic that represent Loki as a player hero.  These are “general” Loki milestones, not particularly tied to his current, de-aged version or even tied to a particular time period, so if you want Loki running around in your home made events or even Annihilation, here you go.

Oh, and I guess he’s in a movie or something too.

(By the way, if you want a good set of Loki stats, look no further than the Plot Points website.  Lots of great characters, and Loki isn’t too hard to convert from a Watcher character to a Player hero). 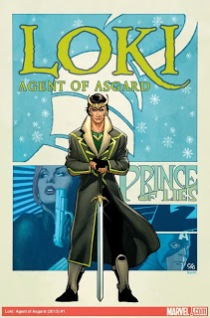 Sometimes, even when you are on the side of the angels  (and your dear brother), you have to stay in practice.

1 XP  When you convince an ally to take an action based on your direction without explaining why that action is important.

3 XP  When an ally that is heeding your advice takes stress, trauma, or suffers a complication because they were doing what you told them to do.

10 XP  When you abandon your allies at a critical moment and they are all defeated after your departure, or when you are defeated because you remained by your allies side, and they are victorious in part because of your sacrifice.

Sometimes those around you don’t realize how important you are.  They must be made to learn.

1 XP  Whenever you introduce yourself utilizing an important title, or when those who are addressing your ascribe a title to you.

3 XP  Whenever an ally takes an action that furthers your current joint task and also advances your own long term agenda.

10 XP  Whenever you defeat a major enemy that would have claimed something that rightfully belongs to you, and you either defeat both the enemy and your allies to claim that prize, or you decide that the time is not yet right for your glory to be made manifest, and you warn your allies how close they were to being ground under your heel.