What Do I Know About Books: Maul–Lockdown

I’ve been waiting for Maul:  Lockdown to come out for a while now.  I really enjoyed Death Troopers, and Darth Plagueis was one of my favorite recent Star Wars novels.  I heard a lot about Lockdown being tied into the events of Darth Plagueis, so that only fueled my interest in this book.

To cut right to the chase, I was disappointed.  Somewhere around the middle of the book I was lamenting that it wasn’t closer to the end, which is never a good sign.  It’s hard to say exactly where the book goes wrong for me, but in keeping with the lead character, I’ll chop the rest of this review in half, one without spoilers, and the other half getting into more specifics.

The book does show Maul being a bad ass, but he’s a fettered bad ass.  I won’t go into more details, but the hindrances that he operates under would be great, if they made a bit more sense. Instead, you spend a lot of the story wishing he would just cut loose, yet he’s still holding back. 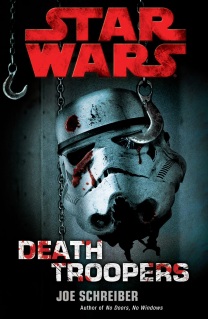 The narrative is brutal, which isn’t a surprise given Joe Schreiber’s previous offerings, but much like Maul’s fettered bad assery, I kept waiting for a satisfactory release, something that made all of that narrative brutality worth the effort, but in the end, the story just gets so mired down that the ending isn’t so much a satisfactory resolution as it is an abrupt stop.

I think that the story may have been competing with Darth Plagueis, trying to create layers and layers of intrigue.  Given the limited scope of Maul’s mission, and the time frame under which this book unfolds, the layer upon layer of convoluted plot twists start to feel like they exist only for the purpose of drawing the out the story, not because the story actually calls for those twists to occur.

There are horror elements in the book that seem forced, almost as if Scheiber knows that horror is his wheelhouse, so horror goes into the mix.  Those elements always seem kind of tacked on and forced.  There is one chapter that is devoted to this horror element that seems to be trying to explain why the element is included, but feels so disconnected from the rest of the book that it might as well not be in the book.

The ties to Darth Plagueis don’t seem to hit the right notes either.  There is a specific event in that novel that all of these events point towards, but Plagueis himself doesn’t seem to be in the same state of mind in this novel as he was at that point in the novel.  Unless I really misread what was going on in that book, I’m not sure why things unfolded the way they did in Darth Plagueis if the events of this book are also true.  This is a shame, because it actually caused more of a disconnect with me rather than tying the two narratives together.

Schreiber is not a bad author, and there are parts of the book that are enjoyable.  The whole doesn’t seem to come together the way it was intended, and it means that the whole is less than the sum of it’s parts.  I still want to read more Schreiber in the Star Wars universe, but I’m not sure that using an existing character as his lead or fleshing out the backstory of another work is the best way to utilize his talents.

If you don’t mind spoilers, read on.

Specifically, it was very odd to see Maul admonished to not utilize the Force during his stay at the prison.  While I know that Maul isn’t a “real” Sith, at least according to Darth Plagueis, Darth Plagueis, the novel, goes to great pains to point out that the Sith test themselves at utilizing their powers, even in front of Jedi, in a manner that isn’t detectable.

For a while I thought Sidious was testing Maul, seeing if he would disobey an obviously silly directive, but given that Sidious seems to be really keen on Maul completing this mission, that would make no sense.

I know that the Republic in this era is rotting from corruption, but I have a hard time believing that it would allow legal, regulated betting on prison fights.  Heck, even the Empire couches things like this in legal double speak and doesn’t just flat out allow such twisted amusement to be considered legal without a least a few technicalities being invoked.  And if it’s not legal, then why is the Republic Gaming Commission involved at all?

I know it’s a made up universe, but I have a really hard time buying that it’s even remotely cost effective to build a prison that can be completely reconfigured the way Cog Hive Seven can.  I know they recouped the cost with the betting, but if something like this isn’t astronomically, prohibitively expensive, why aren’t all major Imperial prisons built like this?  It seems like it would be a great way to keep people from escaping.

How many freaking random beasts can you keep in a prison?  I mean, even if you are taking bets on prisoners and broadcasting it, keeping random animals penned up in a prison just seems like something that happens only to allow the author to throw things like Wampas at Maul.

How does Iram Radique actually make any credits?  It seems impossible for customers to actually make contact with him.  If there is some other channel for contacting him, it seems like Sidious would have just used that.  So Iram hides from customers, and then attempts to kill them, and if they survive multiple attempted assassinations, he might act like he wants you to work with him, until he tries to kill you again.

A Chiss, really?  An arms dealer with an overly complex organization could only be a Chiss, huh?  If he was a Chiss, I figured his precautions would actually make more sense, instead of barricading himself in a prison and hiding from customers while putting out the eyes of the people assembling his weapons so as to make him appear more creepy, but overall just kind of hindering his operation, because your whole assembly line is blind!

Let’s analyze the arms dealing business model in this book.  Inmates smuggle in tiny components. Birds fly the tiny components to a hidden assembly area, where thousands of tiny parts are assembled by people that have had their eyes put out.  The inmates are paid by little strings that signify some code that gives them access to credits, but none of them will ever leave this place, and they have no contact with their families, so credits are basically worthless.  Customer orders come from . . . ?  Next step . . . profit!

Why does Darth Plagueis suspect Sidious in this book, but never seems to be convinced that his apprentice would attempt to kill him in his own novel?  I may need to reread that section of the novel, but it also seems like this book takes place when Plagueis is pretty much withdrawn from the galaxy as a whole, but he’s shown here still ordering around IBC members and throwing his weight around.  But the main crux of my disconnect is, why is Plagueis wary of Sidious here, but is convinced of his loyalty later on in the narrative of his own novel?

Oh, and mass producing “synthetic” lightsabers.  Remember, you only want free-range organic lightsabers.  And how was showing people how to make lightsabers less of a problem then using the Force to not die in a fight?

The formula going into this was pretty simple.  Maul goes undercover in a prison to find an arms dealer in order to secure a weapon, and finds out there is a prison fight club along the way.  The whole thing could be been resolved in a much less convoluted manner and still been pretty satisfactory.  But I have to admit, you will never produce a great story taking the safe path, and at least Maul attempts to do something different, it just doesn’t seem to succeed in doing what it sets out to do.