It’s been a long, long time since I summarized what was going on with my Edge of the Empire teams.  We had lots of fun, but keeping up with both campaigns on a weekly schedule tended to take up a lot of my gaming resources and energy, and I erred on the side of prepping the campaign.

Team Besh ended up getting the “support” story arc, meaning they didn’t get the Big Job that would determine the fate of Honest Cid and his business, but still had to feel like a solid ending.  Throughout the campaign I had a few dangling plot threads to determine which one would become important enough to become the secondary arc.  I had a corrupt Moff whose name kept coming up.  I had the Zann Consortium that was growing a fleet and specifically harassing the Tapani sector.  I even had a brief hint of Cid’s family story coming forward more.

In the end, however, it made a lot more sense to make the last arc a bit more personal, and it was tied to Dia  (the respected scholar who also happened to be a former slave, bounty hunter, and assassin) and Doctor Smith  (the former Imperial doctor looking for redemption, and being blackmailed by corrupt Imperial Intelligence officers) and their backstories.

When Tor’Waar from Team Aurek went crazy and ripped the Mining Guild guards to pieces, Dia’s hunter’s license is what Cid used to hire mercenaries to take out the Wookiee, and this she got her own cut of the bounty.  Now, Tor’Waar has been mysteriously broken out of Mining Guild custody, and Cid makes another deal with the Mining Guild to send Dia after Tor’Waar.

There are rumors that Tor’Waar has rescued by the Undefeated Hand, a cult of gladiators that has been releasing videos on the Holonet talking about spreading war across the galaxy to test the mettle of all beings.  The Undefeated Hand has been known in the past, but not as a serious threat.

The group follows a lead to Terminus, the planet where Team Aurek started.  Dia and Garner set up a cover story where he’s trying to act as her manager to get her fighting jobs.  This marks the first time Dia wears more traditional Twi’lek garb, to fit in with the look of the Undefeated Hand.

Team Besh is approached by a local infochat, but they get the feeling that he’s setting them up for a trap.  They avoid him, get a hotel room, and Dia talks to Drifter  (from Team Aurek) about finding a conspiracy blogger friend that might push them in the right direction.  This leads Team Besh to Grexl Zor, an Aleena sports enthusiast and someone even more crazy than Drifter.  After sifting through a lot of other theories, they get a lead on someone to talk to in a diner near the industrial district, and Dia then distracts Grexl by telling him that Drifter needs to hear these theories.

Before the group can follow up on this lead, one of the people that Dia owes her obligation to shows up.  Turns out she was set free to help a group of Twi’lek slavers undercut other slavers with her killer tendencies.  The Twi’lek in Dia’s hotel room gives her the location of a Zygerrian slaver ship, and tells her that it would be best if only one of the slavers survived to explain what happened to the rest of his fellows.

Dia has a surprisingly easy time recruiting the rest of the party for her side mission.  Garner already hates slavers himself, and Dia promises S-1R can sing his preprogrammed killing song once they get next to the slavers.

Once again Dia and Garner set up a cover story about Garner wanting to talk business to the Zygerrians, but before the group can get inside the compound and surprise the group, the Zygerrian second in command touches Dia’s lekku, and the scene turns into all out war.  Doctor Smith does get onto the ship before all Hell breaks loose, but that means Doctor Smith has to face off against the captain face to face.  As the fighting starts, Doctor Smith, despite wanting to turn over a new leaf, instinctively takes cover behind the slaves, and the captain burns a few holes in them as a result.

Krill, the low key slicer, sneaks over to the ship during the fighting, enters the ship’s top hatch, and surprises the crew starting to warm up the ship, and by surprise, I mean, shoots them in the face, which was a bit of a surprise given Krill’s low key demeanor.

T3 frees the slaves with his mechanical skills, and gets swamped by the fleeing slaves.  S-1R and Dia cut a swath through the Zygerrians until they finally get to the captain and kill him.  Garner wants to look for valuable items among the dead and in the cargo hold, but the authorities are on the way, so the group launches the Zygerrian ship, makes sure one of the slavers is alive, preprograms the ship to jump to hyperspace, and then makes a daring escape in the ship’s escape pods as the ship lurches towards lightspeed.

When the team returns to the hotel room, the next morning the whole hotel floor is blacked out and T3 and S-1R are shut down.  One of Doctor Smith’s blackmailer arrives and wants Doctor Smith to ruin the operation of an up and coming Imperial Destab agent making them look bad.  It turns out that this Destab agent is a private investigator that the team met upon arriving on Terminus, with the cover story of looking for a young Rodian that has run away to join the Undefeated Hand.  Dia also hears the Imperial agent mention one of the blackmail files on Doctor Smith as the “Ryloth files.”

The group heads to the diner that Grexl Zor sent them to, and they “audition” for the Undefeated Hand contact by fighting a band of Undefeated Hand underlings.  Before the group heads to the Undefeated Hand’s local headquarters, an abandoned lumber mill at the boundaries of the industrial district and the forest, they decide that they should contact the Destab agent to act as their promoter, so that they can get him close at hand and figure out what he’s doing on Terminus.  Once they contact him, Dia also takes him aside, tells him that she knows that he’s Imperial, and she wants to cut a deal for the Ryloth files.

Mundo Korr, Dia’s friend and fellow bounty hunter, was on this case before Team Besh, and Argus Lorn throws his body at the team, having killed him for getting too close to the operation.

Since Team Besh told the Destab agent what they are doing, the Destab agent drops a force field around the team and unleashes a Rancor on the team.  Unfortunately, T3 has been coated with Rancor bait, and the Rancor is primarily concerned with eating the droid.  S-1R attempts to save T3, and both of them get slammed hard.  S-1R does manage to stab the Rancor very effectively, and it starts bleeding out, but the team still spends a little bit of time running from the dying, but still dangerous, Rancor.  Krill manages to get the force field down, and the group chases after Argus Lorn  (the Destab agent), who escapes.

Krill gets T3 up and running again, and the group chases after Lorn’s ship and heads to Eriadu.  On Eriadu, the group meets up with a Bothan who has been keeping track of the Destab agents movements, and he lets them know that something big is going to happen in Tarkin Memorial Plaza, but the Rebels he was working with have all been arrested. 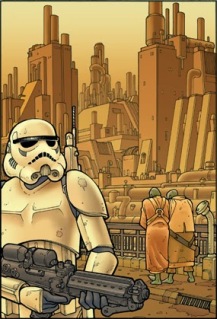 After an argument with T3 and S-1R over getting an oil bath, and Sir Sparkles (Dia’s K-9 droid) joining into the conversation, Dia is suddenly out in the open, and people are starting to take notice.  Thankfully, Krill has found a public information terminal, sliced it, and shut down the facial recognition software.  He also uses the cameras to locate the two cargo vans that Argus Lorn is hauling the Undefeated Hand around in.  The team hurries into position as the vans reach either side of the plaza.

When the vans open, Argus Lorn sets Tor’Waar free, and he promptly kills a half dozen civilians.  Both vans also have bombs on them.  Lorn is hoping there will be plenty of footage of aliens killing humans on Eriadu before the bombs go off.  S-1R engages the Wookiee, and T3 attempts to disarm the bomb.  The rest of the team heads to the other van to take out the second half of the assault.

T3 begins to disarm the bomb, but is slammed on the head by an Undefeated Hand member with a power hammer, and T3 accidentally sets the bomb off early, blowing up a thousand or so civilians, and nearly dropping Tor’Waar and S-1R.  S-1R sets off a bomb he has had installed in himself, which badly injures Tor’Waar, but doesn’t kill him.  Tor’Waar makes his way slowly to Dia.

The rest of the team has been fighting Argus Lorn and the rest of the Undefeated Hand members.  Lorn has a jet pack, so he doesn’t have a hard time maneuvering the battlefield and can escape the bomb blast quickly if he needs to.  Doctor Smith and Krill are trying to shoot Lorn’s jetpack to strand him near the bomb blast and slow him down, while Dia goes into her vibroknife murder dance and the respected scholar kills the rank and file Undefeated Hand members.

The group has moved the second van to the cleared out area where the first van blew up, since there is no time to disarm the bomb.  Argus Lorn drops Dia and Doctor Smith, and Krill is standing alone against the Destab agent.  The group has ruined his plans in so far as he doesn’t have footage of the aliens killing humans because the bombs went off too fast.  Krill can’t take out the Imperial Agent, but he holds on long enough to stall Argus Lorn, getting the agent to talk long enough to make him forget the bomb about to go off, which blows and takes out the Destab agent. 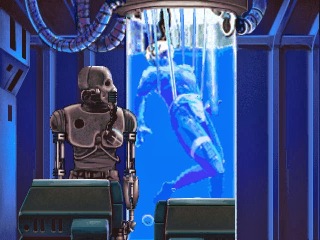 Team Besh, minus the poor, dead T3, wakes up in Bacta tanks.  Doctor Smith’s blackmailers mention that he didn’t quite need to be that extreme in ruining Argus Lorn’s operations, and they mention to the rest of Team Besh that so long as the blackmailers know that the group was involved in the now infamous Tarkin Memorial Bombing and the death of an Imperial agent, they will have to do a few jobs for them, from time to time  (+5 Obligation, Favor to Imperial Intelligence blackmailers).

Thus, the Dark Side ending.

Like Loading...
tagged with Games in Review, Star Wars Edge of the Empire, Tales of Team Besh