I’m playing in the local 13th Age organized play at Armored Gopher on the opposite Thursdays from the Age of Rebellion game.

Why am I posting in this format, instead of doing a nice character journal like I am doing with Orts Freestar in the Age of Rebellion game?  A lot of it comes down to format.  Initially I thought we were going to be jumping from adventure to adventure, and not playing the same character for more than a few sessions in a row.  This led me to not want to get too invested in the character.

I had three things in mind as I made the character.  For some reason, I had the idea about how rangers in the old Vikings sourcebook for AD&D 2nd edition were likely from Finland.  I also had it in mind that I wanted to see if I could make a character into a 1st Edition ranger.  In other words, arcane and divine spells, no dual wielding, and no animal companion.  And I wanted him to be kind of a thick, almost accidentally charming guy.
I’ve got some hooks to play with, but I did make him kind of simple, both in and out of game, and now it looks like the group has talked our GM into jumping to the next set of organized play adventures that would let us keep playing the same character, which makes me wish I had fleshed out Valto Doomskimmer a bit more and made him a little more three dimensional.

That said, I had a lot of fun playing Valto, and getting a chance to play 13th Age again.
Since it’s organized play and people reading this may read this summary, I’ll try to hit on things that I doubt will give away anything. 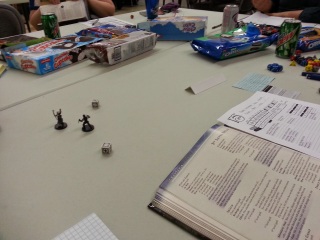 First, the dice hated me.  I mean, really.  I was rolling 4s or lower every time I tried something for a while.  At least until we got to the most silly thing in the session later on.  I even managed to shoot our rogue, who I convinced to take point and be the bait for some of the bad guys we were trying to lure into the alleyway.
Thankfully, I’m pretty sure he forgot about getting shot, at least for the moment.  Probably because the rogue kept calling the wizard by his squirrel familiar’s name.
We had a lot of fun improvising an infiltration, but I have to admit, we didn’t do the best job of coming up with “good” explanations, just ones that worked because we did a lot of tap dancing with a relatively thick bad guy.

Our demontouched sorceress has a built in explanation for being in any evil situation.  All she has to do is act indignant and threatening, and people tend to back away from her.  On the other hand, Valto drew up his cape over his face, intoned a horrible eastern “European” accent, and convinced the guard that he was a vampire.  Trip, our rogue with a theater background, convinced the guard that while he was indeed a human, he was signed up as a vampire intern and was looking for the vampire he was assigned to when he signed up.

Then Syl, our elven wizard, blasted the guard in the face with a magic missile.

It was a lot of fun, but I have to admit that it was a bit on the silly side, and I fully admit that I didn’t help that tone at all.  I do kind of wish that there was a bit more “grit” in the session, but I also have to admit, coming into one of the adventures in the middle, I felt a bit lost as well.  I just started to ham it up, and that was the thing that was working.

I will say that while I enjoy the 13th Age organized play format much more than other organized play that I have seen, I do wish the default adventures ran a bit longer.  I get that this is similar to the format used for D&D encounters, for example, but with the game being less tactical and more narrative, I feel like the story is just starting to build, and then it ends.  It could just be me, but I’ll also freely admit that it’s only the second time I’ve gotten to play in 13th Age’s organized play.