Last Thursday I once again got to play Valto Doomskimmer.  This is a good thing.  I had a terrible day at work, and I desperately needed a night with my alter ego to wash away the corrosive goo of reality.  Worked like a charm, and I’d like to thank my GM and my fellow players for making the session enjoyable.

Before the actual night, however, I decided to flesh out Valto a bit more.  Since we are going to be playing these characters for more sessions consecutively than we had previously planned, I thought it might be a good thing to have more background on this guy in my head.

To this end, I did the same thing I did with my clone trooper in Age of Rebellion, on a smaller scale.  I used Fate aspects to “explain” why Valto was the way he was.

I mentioned the last time my very general concepts for the characters, but last session I also added that Valto seemed to be out of sorts in a city  (granted, a city full of undead), and could be a little obtuse (without entirely being an idiot).  That led me to this set of aspects:

High Concept—Befuddled but earnest storybook hero
Valto confuses easily, but he really wants to do the right thing most of the time. If he sees a person in need, or a wrong that needs addressed, he’s on it, as long as the situation isn’t too complicated for him to process.
Trouble—Out of his depth in civilization
Valto is at home in villages, camps, on caravans, and under the stars. In larger towns and cities, he has no idea what is going on. He’s an expert tracker in the wilderness, but he can get lost in the hallway of an inn, and the swarm of humanity at the docks or in a market square sets his hair on end.
First Adventure—More charming than he seems
Despite being earnest and simple, and despite his lack of ability to function in complex society, Valto manages to be charming and courtly in the strangest situations. He nearly died saving an emissary of the Elf Queen as she was passing between the Three Courts, and when her healers revived him, despite the complexities of Elven customs and traditions, he managed to do and say the right things to not only be ingratiated to his Elven hosts, but to catch the eye of the Elf Queen herself.

This gave me a better handle on how I wanted Valto to react to the environment and the other characters. I also had a better idea of what my “mission” was this time around, since I hit the ground running last time. In the interest of full disclaimer, even though I wanted a handle on Valto, this has not been a deep, nuanced roleplaying campaign. This isn’t a bad, thing, and it doesn’t mean we’ve been devoid of roleplaying. It’s just that the roleplaying has been a lot more over the top and on the comedic side. Probably why I visualize Valto based on a Disney character, eh?
After my improvised disguise from last time (I pulled my cloak in front of my face and affected an eastern European accent to prove I was a vampire), we managed to sneak into the dungeons. One of our companions was already in the dungeons (since he wasn’t able to be there last session) and our first stop was to pick him up and head back into the quest.
Loompa is a halfling barbarian with a disdain for clothing. He manged to “sneak” into the dungeons as by hiring on as a prison guard for the “vampire prisoners.” Loompa was confused, and thought that maybe all of the prisoners were vampires. Not that he was that picky. Valto was pretty terrified by Loompa’s battering of a “vampire prisoner,” and we managed to talk him into rejoining the party. I also got to throw the prisoner a longsword and fired an arrow at his shackles to free him, and I rolled high enough to look impressive. Strangely, he became more important later, but we’ll get back to that.

This part of the adventure was much more combat heavy than last session, so next up was the improbably sewn together flesh golem made of parts that shouldn’t form a humanoid but somehow did, as well as parasites. I won’t go into too much detail, except to say that it was a fun fight, and I got to do a lot of running from place to place, taking my shots, and taking advantage of my ability to get a bonus to my second shot when I picked a different target. I must say, I do like undead that have parasites. Its an underutilized presentation of rotting flesh.

We also had a fight against three more undead, more powerful, with one that was much more powerful than the other two. At this point I decided to roleplay how my Fey Queen’s Enchantment worked. When confronted with the big bad, I was about to shoot the main bad guy, but my protector, the Elf Queen, fired a lightning bolt from me towards the big bad herself.
The fight felt pretty epic. The wizard got to a safe distance and pelted the bad guys with spells. The rogue disappeared, popped in and out of the scene, and got dazed so that he was having a hard time hitting anyone. Loompa the barbarian was battering the crap out of the bad guy, and dropped from his injuries. I was shooting her a lot, but ran over to Loompa to save him, but then made a few more attacks and dropped myself out of the fight from psychic damage. 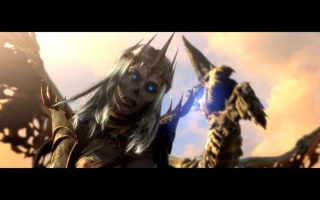 The Syl (the wizard) kept consistently battering the bad guys, and we only had the big bad left. Trip ran over and saved me after I had saved Loompa, and after spending much of the night missing, managed to run up on the undead nemesis and strike the final blow to take here out.
I won’t describe what we had to do next, in case anyone happens to know what OP adventure we are playing. There were some hilarious application of backgrounds, and a 1 on the roll that managed to undo everything we had accomplished up to that point. It was great.
In the end, we had to describe how we escaped the vile fortress we were in. I mentioned that I had grabbed Loompa’s rope and fired it at a high window, so we could climb out on the rope, but the rope was too short and my bravado did nothing. We split the party, and Loompa and I climbed up to the window, and I dove out the window into the water to swim to shore, while Loompa looked for a boat. Trip and Syl went down the hallway and found out that the prisoner that we had freed had started a uprising, and using that as cover, Trip and Syl left the fortress. Trip, Syl, and Loompa found Lilith (our missing party member), who had already secured us a boat. Eventually the group found me attempting to heroically swim to shore and hauled me into the boat.
Since our mission involved multiple Icons, we had a hard time deciding where to deliver the “thing.” We decided that we would roll our Relationship dice to see whose agent found us while we were discussing what we should do with the “thing.” An agent of the High Druid showed up and promised to quit sending wild animals to kill Loompa.

Loompa was upset, because he thought the druids were keeping him fed by sending him wild animals, and demanded that the animals keep being sent. Meanwhile, Trip and Valto wanted the “thing” to go to the Elf Queen, so I decided to flash my smile and use “Managed to Entertain the Elf Queen” on the druid, and convince her that maybe the Elf Queen should get a note to visit her half sister about the time that the item was delivered to the High Druid, and she agreed that this was a viable course of action.
We all went our separate ways, vowing to meet up again when we didn’t have anything else better to do. For Valto’s part, he wandered to Shadowport, was beaten and robbed in an alleyway, reaffirmed his disdain for cities, and wandered back out into the wild to hire himself out as a guard, guide, and tracker.
Lots of fun so far, and I’m looking forward to the next game.