Free RPG Day From the Trenches

This year’s Free RPG Day was the best Free RPG Day ever, but it didn’t have that much to do with the free stuff.  Oh, there was some nice stuff, don’t get me wrong, but the best part of the event this year was the actual gaming.  Between getting to game with my daughter +Audra Rascher, and playing in games run by +Rob Barrett and +David Thiel, as well as getting to play in two RPGs that I have never had a chance to play before.  It was great.  But first things first.

I picked up the Dungeon Crawl Classics offering for Free RPG Day.  I was tempted to pick up the 13th Age adventure, but both Rob and my regular GM +Christopher Osmundson might have wanted to pick up and run the adventure, so I didn’t want to peek at anything I shouldn’t see. 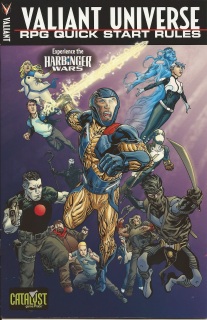 The other loot I picked up was the quick start adventure for the Valiant Comics RPG.  I don’t have a lot of experience with Valiant comics, but I know a little, and I’m a sucker for super hero RPG rules  (see also below).

I have yet to really dig into any of those offerings in depths, other than to note that the adventure map in the DCC adventure looks pretty epic.

My daughter picked up the Shadowrun/Battletech quick start flip book, and the Mage 20th Anniversary quick start rules.  Given that I’ve not spent a lot of time with either Shadowrun or Mage, despite how huge those RPGs were (ironically around the time I was starting to get out of RPGs for a while), its interesting that my daughter might have more of an interest in those games than I have shown thus far.

On the other hand–Battletech, oh, yeah.  It’s been a while, but I spent a long time playing that game in my youth.

Rob ran a game of Supers! for us in the first slot of the day.  Rob did a much better job of summarizing the action on his own blog here, but I’ll try to do my best to throw in my two cents from my angle.

I think it was a good idea to use the extra time in the session to highlight character creation, because the game is pretty simple when it comes down to it.  That said, because some superheroes are extremely strange and complicated, you can always find a corner case example that makes everyone at the table scratch their heads and wonder how you would pull off a given thing.

Way back on this very blog, I created a Mutants and Masterminds version of the character I ended up making for this game.  I forgot a few details, but I remembered most of what I had thrown together, so I could pretty quickly assemble the character in this system.  My daughter decided that she wanted an “edgy” super soldier like Slade from DC Comics, but instead of a sword or power staff, she carried a huge plasma cannon, and she came up with the name Ka-Boom.

One thing I’d like to point out that Rob probably blocked from his mind to save his own sanity is that since our first villain was an ice based villain.  I decided that since cold based villains use the worst puns, the Lawman was going to preemptively assault Cold Kill, our villain, with puns.  I mean, lots of them.  Really painful ones.

Everybody groaned, but I consider it a victory that other people at the table decided to preemptively pun the next villain we ran into.  For example, when he shot his finger at us and it missed, and someone that totally wasn’t me said, “he just tried to give us the finger,” or when he missed with his liquid metal claws, and yet another person said, “I think he missed the point.”  Totally vindicated.

The system was quick and fun.  I’d play it again, but I’d be interested in tweaking a character a bit more for long term play versus a one shot.

If you have read any of my posts on Dungeon World, you may have picked up on the idea that while I like the game, I just felt like I was missing something when it came to actually running the game, and it made me concerned that if I ever tried it, I would get it wrong.  I was looking forward to getting to play in a session and see what the system looked like from the player’s side of the screen.

Thankfully, it was a whole lot of fun.  Turns out I wasn’t so much missing something, as just over thinking how the elements worked in play.  It seemed to work really well, and for the most part the game went really well.

I picked the Bard, named him, then came up with about five titles for him.  I also made him Chaotic.  In Dungeon World, your alignment isn’t so much something to tell you what to do and not to do as it is something that gives you some guidelines as to what you should get XP for if you push for that thing to happen.  In my case, my objective as a Chaotic bard was to convince others to quick, decisive action, good idea or not.  Mostly not.

I only picked three of the six players to create bonds with, but it’s kind of cool how many times the bonds came up in the actual game, giving people excuses to roleplay.  It’s something I’m thinking of snatching even for non-Dungeon World games.

I spent a lot of the night convincing the party that all good adventuring parties should encircle their bard to ensure his safety so that he could record their deeds and give out advice in battle.  I hesitate to point this out, but I managed to go the entire session without getting injured.  Not a coward, just clever.

Given that very few people had played Dungeon World before, everybody seemed to pick up on how to play rather quickly.  There was one down side.  We had one player that isn’t as assertive as some of the personalities at the table, and he was having a hard time jumping in and explaining his actions when he wanted to do something.  He felt much more comfortable in a more standard initiative structure than cutting in to explain what his character was doing.

In the end, he appeared to have a good time, but I don’t think Dungeon World would be his choice for fantasy roleplaying.  That’s not a knock, either on him or Dungeon World.  Its just the reality that we all have preferences and comfort zones, and even good games won’t be to everyone’s tastes.

My daughter was playing a druid, and she turned into a bear.  A lot.  Apparently she wasn’t particularly good at swiping the heads off of goblins, but she could hug them into goblin jelly five or six at a time, and at one point managed to launch one of the party Halflings into combat when she came to a dead stop.

In the end, it was a whole lot of fun.  I’d play Dungeon World again, and it also makes me much more interesting investigating, and hopefully playing, more Apocalypse World Engine games.