I just finished reading my electronic copy of Unframed:  The Art of Improvisation for Game Masters.  This is by the fine folks at Engine Publishing, and I look forward to every product they put out after seeing the quality of the previous offerings from the company.  This one is a bit different, but not in quality. 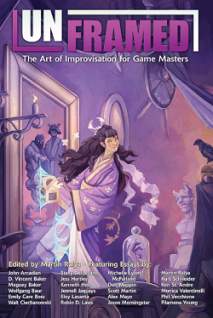 The first two books that Engine Publishing put out were toolkits for plots or NPCs respectively.  The next two books were on the topic of organization and management of game sessions and campaigns.  To me, all of those topics were immediately interesting.  I like to be organized and prepared and to have tools to draw from when I paint myself into a corner.  But sometimes you can’t “unpaint” yourself with pre-planning.  You have to handle changes and curve balls when they happen to keep everything moving.

I’d also like to point out that a lot of games now are also building in at least some level of improvisation.  GM Intrusions in Numenera, threats, advantages, despairs, and triumphs in Fantasy Flight’s Star Wars games, and the Icon relationship rolls in 13the Age are all examples of “built in” improvisation.

So one could almost say in the current RPG climate, improvisation is the “in thing.”

Unframed is a fun read, and it’s well written.  I will admit that initially I wasn’t sure I was going to enjoy it or get as much out of it as some of Engine Publishing’s other offerings, in part because some essays are more radical in their advocacy of improvisation across the board than other essays.

There are lots of essays on improvisation that come at the topic from various angles.  Some approach the topic from the angle that you might want to try to improv your game from start to finish.  Some articles are predicated on radically changing the way you prepare and run your games.  Others are less drastic, and are about having tools in your kit for when your players go off the beaten path in a more standard game, and the importance of having quality improvisational content to spring on your players.

I have a hard time letting go of a least the semblance of narrative control.  The articles on full improvisation were a bit less immediately useful to me than the articles on incorporating improvisation into a more traditional game, but even the more ambitious articles are entertaining and might spark the urge to try an unscripted session or two to try out the techniques detailed in them. 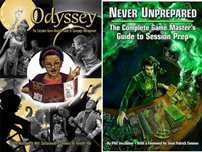 As an aside, I’ll say that I imagine GMs that are much more improvisational probably would feel the same way about Never Unprepared or possibly even Odyssey as I felt about this book, i.e. that the books are well written and fun to read, but large portions may not be useful right off the bat.

There are lots of great essays in the book.  I enjoyed reading every one.  But if you are a GM that doesn’t like to cede control of the overall plot, or if you like being really prepared, you will find useful, entertaining information, but not as much as you will if you are willing to throw caution to the wind and embrace a new paradigm to your gaming.  Overall, still worth your time to pick up and read, at least from my point of view.