Having already set a dangerous precedent by posting the details of my Iron Kingdoms character tonight, I figured that I might as well double down and see if two campaign can survive the crippling weight of my backstory, so without further preamble, here is the background of my Ithorian Jedi from our Force and Destiny game.

Note:  Our Force and Destiny game takes place about 15 years after Order 66, so not quite within the Rebellion period proper.

Nootak was taken as a padawan by the Ho’Din Jedi Knight Phyrim Nol, a well regarded Jedi Healer.

Phyrim had great misgiving about the Jedi assuming military ranks, citing both the failings of the Jedi just before the Ruusan Reformation, and the limited number of Jedi relative to the massive droid armies of the Separatists.

Because of his misgivings, Phyrim was not assigned to lead troops, but both he and his padawan were sent to various battlefields with large numbers of wounded that might be cut off from more traditional medical facilities. 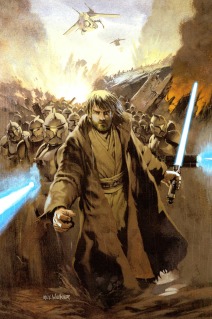 During the Outer Rim Sieges, Phyrim and Nootak were isolated without space support on Jabiim.  Phyrim was killed, but Nootak managed to keep enough clones healthy and alive that the majority of the troops survived long enough for relief to arrive.

Because of the trials on Jabiim, Nootak was promoted to Jedi Knight, and assigned to Mace Windu’s special project, slowly transporting artifacts and relics from the Jedi Temple to keep them safe from incursions such as Cad Bane’s holocron theft, or the bombing assisted by Barirss Offee.

Almost as soon as the project was undertaken, Order 66 happened.  Warned away from Coruscant by Obi-Wan’s emergency transmission, the ship and the Jedi thereon began a series of covert trips around the galaxy.

Nootak assumed the identity of Hogan Dagoon, and between shifts on the reliquary ship, Dagoon sought out low population worlds, especially those with forests, jungles, and swamps.  Hogan spent a great deal of time meditating and living in the wilds, sporadically traveling to smaller settlements in order to heal the injured and keep in touch with his need to heal and help others.

Hogan believes that special truths in the Force can be found by meditating on the natural world.  Hogan firmly believes that worlds like Coruscant or Nar Shaddaa confuse those that live there because of the lack of connection to the natural order of things.

Hogan doesn’t believe that such worlds are evil or wrong, per se, but that care must be taken to find some connection to the natural world, and thus the Force, in locations that are fully artificial.  For example, having pets or plants to tend help to center a being and foster better decisions over time.

Despite not believing the Dark Side is evil, Hogan firmly believes that it is corrupting, dangerous, and wrong to willingly tap into the Dark Side, because giving oneself up to the impulses of the Dark Side is to controvert the gift of reason given to sapient beings by the Force.

Hogan’s beliefs would likely be a least a little controversial if the Jedi Order still existed, but it is largely a hybrid of the native Ithorian beliefs and the Jedi Code.