Into the Iron Kingdoms . . . Viral Marketing or Why I’m Not a Profiler (Session Recap)

Last Thursday was our first full Iron Kingdoms session  (after a once scene non-combat encounter to set the campaign up the night of character creation).  The adventure we were playing through was Bitter Medicine, and had I actually seen the cover of the adventure before we played, well, let’s just say that my theorizing might have gone differently.

That said, if you plan on playing this adventure spoilers ahoy!

Our group is organized into a small mercenary company.  It seemed to fit the setting well and offer a fairly well rounded backstory to facilitate adventures in the future.  Our group consists of a dwarf warcaster and his warjack, an Iosian elf who none of us know is a member of the Retribution of Scyrah, a Nyss elf storm sorcerer, a ogrun pugilist, a gobber pirate, and my dwarf bounty hunter/Searforge Trader.

The company leader is the warcaster  (somewhat naturally), and the ogrun is my bodyguard.  I’m playing the company treasurer, and our bright-and-not-at-all-motivated-by-murder Iosian investigator is our second in command.  Oh, and I actually made a charter/contract outline for the company.

Last session, we got a job.  A simple job.  Just ride on a train, escort a doctor to help contain a disease, and if bandits attack, cut them down.  Oh, and get rid of them once the doctor is safely to his destination.

The train was attacked by said bandits.  Our ogrun managed to punch a hole in the chest of one of them.  There was so much shooting.  But, in the end, we lost the doctor.  Honestly, that was totally our fault.  While the adventure seemed to call for this to happen, not one of us thought to keep an eye on him or stay close to him, because he must be safe on the train with us, right?

The bandits also managed to infect all of us, because they had the same disease that the doctor was heading to treat.  Which meant that we had a vested interest in finding the doctor, since, well, we might be dead as well if we didn’t have him at hand.

We had a lot of fun getting horses from the mounts left after the fight.  This was one of the cases where we got to use some of the skills that don’t have a single associated attribute attached to them, so when we were making animal handling checks, we got to explain what we were doing to control the horses.  The ogrun pretty much wrestled one into submission, and I studied the horses and drew a diagram  (my character drew a lot of diagrams) on how I was going to approach it, and used my intelligence.  Our Iosian second in command borrowed my diagram, but we had to make notations on it, since I removed a horse from the equation.

Apparently, due to the superior intellect and reasoning skills of my dwarf and the Iosian combined, we managed to get an insane result when it came to analyzing the tracks that led to the bandit camp, which also allowed us to sidestep a significant portion of the adventure.  The Iosian and our gobber pirate crept into the bandit camp, out where a pair of gobbers was digging graves for those bandits that had died due to the disease.

Our gobber pirate did an amazing job of reasoning with the two gobber laborers, and ended up hiring both of them  (we had to slightly renegotiate later, but for now, a brilliant tactic).  The gobbers gave our scouts the layout of the camp, and what to watch out for.  When the Iosian came back to camp with the information, we formulated a plan.

My portion of the plan was predicated on the fact that the bandits wouldn’t risk the doctor’s life since all of them were infected as well.  Clearly if they needed the doctor to cure them, we might be able to negotiate and perhaps circle back around to dealing with them after the doctor had cured everyone.  Again, I hadn’t seen the cover at this point in time.

Our plan involved sending the Iosian back to give the gobbers grenades to drop into the armory to create a distraction and potentially take out a few bandits, and at the same time the armory was blowing up, our warjack would start shelling the compound, far away from the building where the doctor was at.  Then our crack insertion team would go into the building with the doctor and grab him, and then we could fall back and assess things from there, once the doctor was safe.

The gobbers decided not to blow themselves up on accident and actually rigged traps that would go off if the armory was entered, which threw off our timing  (it’s okay, the rest of the plan went south, so timing didn’t really matter).  Our crack insertion team found out that the bandit leader was actually quite fever addled and was more than willing to kill the doctor, and when his turn in the initiative came up, he put a bullet into the good doctor’s mouth.
Also, apparently there were a lot of bandits.  Lots and lots of bandits.  We had them surprised and disorganized, but as soon as they figured out where the shelling was coming from and what direction to head, we were probably well and truly screwed. 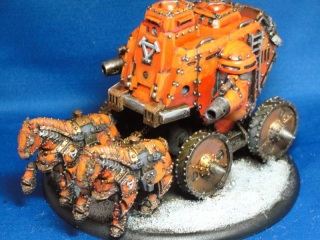 Thankfully the pirate gobber hired well, and the gobber backup team managed to harass an armored carriage.  The orgun punched the crew out of the carriage, and our insertion team started the “tactical retreat” part of the plan.  In this case, at high speed, nearly tipping the wagon over.
We provided cover fire.  The warjack was better at it than I was with my sword cannon, but hey, what are you going to do?  When the carriage was nearby, I jumped on, and our warcaster pumped up the warjacks speed, and we ran like a  . . . well . . . like a mercenary crew trying to keep a doctor alive so that they themselves would not die and then might have a chance to actually acquire more wealth.
Thanfully, the doctor’s assistant managed to keep him alive, and he assisted her in administering the cure, even though he was partially incapacitated and unable to talk . . . with a big hole in the back of his throat and all.  Sorry about that doc.
We hired the gobbers on.  I’ve got to amend the documents now to adjust for junior members of the company that get a quarter share.  But I think they earned it.  I was all excited, because I had dreams of actually going to a tailor and working up designs for a formal uniform for our company, but alas, another job was waiting for us. 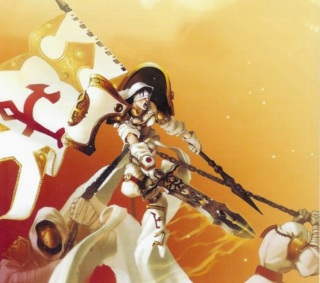 Our job invitation was delivered by someone that literally ran themselves to death to deliver it.  When we didn’t respond right away, someone else showed up, with the same fervor, and apparently our little company now has a meeting with the Harbinger of Menoth.  Yikes.
Highlights of the Night