When last we left our intrepid exiled Jedi Knights, they had witnessed their shuttle being violated by amorous Icetrompers.  Other stuff happened as well, but that was probably the most noteworthy.  Well, that, and they were traveling across Hoth on Tauntauns carrying a Jedi artifact and another box of Important Jedi Stuff that we had yet to open, because Gand mystic’s meditations said the box wasn’t of immediate importance to getting off the planet.

A snowspeeder was rapidly approaching us, and leaping out of the snowspeeder was a Zabrak wearing furs and a talisman with a crystal set in it.  The way he jumped out of a moving speeder made it pretty obvious that he was a Force adept of some kind.  It was made even more obvious when he punched Triseth, damaged his armor, and sent him skidding backwards.

Most of us circled around the Zabrak, and briefly discussed whether we should be careful and not use lethal force.  After all, he was a Force user, and maybe we could bring him into the fold.  While we where having that debate, our Jedi shadow Ritati crept over to the snowspeeder and identified Imperial markings on the vehicle.

The Zabrak’s mind was shielded from “Schick,” our Gand mystic, and his Force assisted martial arts were keeping the rest of us busy.  Bynder (our Twi’lek Jedi hunter) and Triseth managed to take the Zabrak down, but not before Bynder used his flame thrower to catch the Zabrak, Triseth, and Ilvar’sen on fire.  Thankfully Hogan  (my Ithorian healer) got to use his healing powers and feel very useful.

Ritati had some . . . difficulty . . . slicing the com unit on the snowspeeder and accidentally opened a channel to the Emperor.   No, seriously.  Apparently our Zabrak friend was an Emperor’s Hand, and Ritati had Sheev on speed dial.  He indicated that his Inquisitors already knew we existed and were looking for us, which was a bit disappointing, as galactic level news goes.

Ritati explained this to the group by saying, “my job is not to be seen, which I’ve obviously failed tonight.”

We pressed on to the alternate landing zone for our other shuttle, near the mysterious power generator that we noticed on sensor sweeps.  Apparently that mysterious power generator was the property of a group of proto-rebels on Hoth.  They took our pilot prisoner, and wanted to know who we were.  Before we could get very far into the discussion, we found out that a task force of Star Destroyers were above the planet.

Schick’s vision was clouded by the Dark Side, but I let my fear guide me to look for a way to survive, and found that we had a chance to survive if we managed to send out a decoy ship at the same time we left, splitting the Imperial response to our leaving the planet.  The proto-rebels were very upset with us, but a volunteer from their ranks joined with Bynder, who would take the meditation map that amplified Force senses, and “broadcast” his position as they left the planet.

We jumped out of the system, and made our way to Yavin 4  (a place on the star charts that indicated it might have some Force related relics).  Against all odds, Bynder and Smalls Darklighter  (our proto-rebel contact) survived, but nearly died.  Bynder got limb replacement, we filled up the Bacta tanks, and started probing Yavin 4. 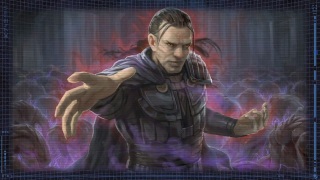 We found a big dot of Dark Side power on the planet.  Schick was again clouded by the Dark Side, which wouldn’t let him have any details about the Big Dark Spot that he sensed.  I made an impossible Lore check and remembered looking into old legends and myths and recalled a story that claimed (unverified, of course) that Exar Kun had died on Yavin 4 and his spirit had been imprisoned there.

We decided that if the myths were accurate, and if the Big Dark Spot was Exar Kun’s spirit, we may want to wait to find any relics on Yavin 4.  Smalls Darklighter left, and we started making plans for where to go next, but not before we placed the mediation mat in the reliquary’s hidden storage, and opened the other box.

The other box was filled with lightsaber crystals, which we set about distributing to the Jedi Knights on the ship.  Bynder, who had lost his lightsaber years before, began to make plans to build a new one, while Triseth began wearing the Zabrak’s medallion, which gave his body properties similar to those found in Cortosis.

Despite all of this, none of us have really gotten together to talk about the fact that the Inquisitors knew we existed, found our master and killed him, and that the Emperor already had people looking for us.  Given that we have a ship full of people that may not be as dedicated to the vision of restoring the Jedi Order as we are, we might have a problem.  But none of us are really talking about it.