Looking at the Realms Through Edition Colored Glasses

There is a discussion on Google+ that triggered this post.  As I didn’t want to derail that thread (which you can find here), I started this post up here on the blog.  Fred Hicks pointed out that a game system will dramatically alter the feel of a setting, regardless of the details of that setting, so that  you don’t really “know” that setting until you experiences it through the lens of a particular game system.

I agree with this in part, and it especially resonated with me when thinking about what bothered me about the massive anti-NPC backlash in the Forgotten Realms going into 4th Edition.

For the decades that I ran games in the Realms, the feeling I always got was that the setting was a slightly more fantastical version of the type of world that Fafhrd and the Grey Mouser inhabited.

For a lot of people that had turned sour on the setting in 3rd edition, it was a setting where 30th level wizards and a few high level NPCs did everything important, and PCs weren’t really “needed.”

For now I’ll not get into the fact that Realm Shaking Events started to play into epic fantasy tropes of heroes that are born to save the world, and thus are “needed,” instead of adventurers being people that NEED to adventure and might end up being world saving heroes.

Instead, it’s interesting to see how the setting might be perceived differently. 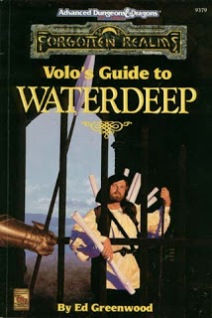 Much of the setting was conceived by Ed Greenwood before there was ever a game system attached to it.  Reading Ed’s descriptions in books like the Volo’s Guides really seems to create a feeling that mixes the swashbuckling of Fafhrd and Mouser with the love of home and hearth found in Tolkien’s works.

Viewed through the lens of 1st and early 2nd edition AD&D, I think you can still maintain that feeling, because there was also a feeling in that edition that even if you adventured for an actual decade in the real world, between training rules and how XP was handed you, your character might never be more than 10th level.

However, and perhaps even more important, from 10th level on, you didn’t get all that much more powerful in earlier editions.  Yeah, spellcasters got really nice toys, but they fell down fairly easily if you hit them with a sword, so Meteor Swarm wasn’t quite as devastating, since your wizard had to survive to cast it at a safe range. 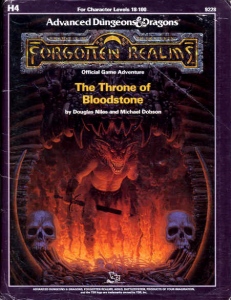 Character levels in Forgotten Realms books were more or less shorthand for saying someone had been around for a long time or had successfully adventured for a while.  In fact, one of the reasons gods initially didn’t have stats in the Forgotten Realms setting is because in 1st and 2nd edition D&D, there was a bit more randomness to how things played out, and your “name” level characters might actually take out Odin if they rolled well and he didn’t.

Looking at the Realms through 3rd edition colored glasses alters things quite a bit.  Because in the new edition of the game every level was suppose to yield a progression forward, and there wasn’t a “name” level where you didn’t get as much return on your investment when you leveled up, all of those 18-30th level NPCs now actually look a lot more powerful than they did in 1st and 2nd edition.

Elminster could stand in the middle of a horde of thousands of orcs and probably survive, statistically speaking, whereas the character, in the fictional setting, would never press his luck in this manner.   No matter how many times you have a character say one stray sword could still end his life, it’s really hard to believe when his native game system gives him 300+ hit points.

Add to this the fact that “ancient magic rituals” used to be things that took centuries to learn and weeks to cast, but because of the Epic level rules, you could now start tweaking epic spells that could be used in combat, and you still gaining levels every few weeks of adventuring if you were fighting appropriately powerful foes, and all of those 30th level wizards, instead of being frail bags of hit points that might know a few powerful spells in older editions, were suddenly guys that should never, ever need a 3rd level guy to run an errand for them.

Add to this the very simulationist feel that 3rd edition got, between battle mats and specific feats that let you do very specific things, and any kind of fiat in explaining how something was a threat or how a given NPC could or couldn’t do something goes out the window.

Another trend also emerges when you look at the how 3rd edition modeled the world.  For the purposes of this discussion, the game fiction exists to set the “tone” of the world.  I’m not describing how good or bad it might be, just that the function is to tell you what the world is like.

With that in mind, earlier novels set in the Realms, when you had to pin down the levels of the participants, yielded people that weren’t “name level” yet.  Alias was a 7th level fighter.  The Knights of Myth Drannor ranged from 3rd to 7th level.  Even Drizzt, the first time he was given a level, was 8th level.  This “pre-name” level was a short hand for saying that the adventurers were competent, but not quite world class movers and shakers.

But as the fiction moved towards 3rd edition, characters often clearly had prestige classes or used certain classes signature abilities, and if you knew even a little about the setting, suddenly that was signaling that the heroes of the latest books were 12th to 15th level, and 12th to 15th level looked more impressive these days than it used to look.

On top of that, lowly 7th level characters would, through luck, skill, and perseverance, might survive a mass of goblins or a dragon.  You know the dragon was scary, but you also know it’s possible that they could survive, from a game perspective.

But once 3rd edition hit, there was no “7th level character takes on an ancient red dragon.”  Even in the novels, it seemed as if characters were starting to take on “level appropriate” bad guys, further making 1st level starting adventurers look like really sad little guys that had to kill 3,782 boars before they could level up and be useful.

The other day on my blog I wrote about how D&D was the “only” RPG lens to view fantasy through in the beginning, and being the grandfather of the industry, was the default defining set of rules for most people.  That definition is often “upgraded” as grandad goes through edition changes.

Time and perspective have helped me to understand why other people didn’t see my then favorite setting the same way that I did, but they have also helped me to see why the long view gave me a different perspective as well.