The thing that is weird for me is that I didn’t dislike Man of Steel.  I liked Henry Cavill as Superman, and I liked Amy Adams as Lois Lane, and Lawrence Fishburne as Perry White.  There were notes I thought it hit too hard or too lightly, but I didn’t think that it was a problem of those notes being part of the story, just how much they seemed to resonate.

There were a few things that didn’t work for me all that well.

None of that was really a deal breaker for me. And you know, that scene.  That one.  Snap!  That one really didn’t bother me that much.  Superman has killed other versions of Zod before, and he seemed suitably anguished by the decision that I kind of got that it was Snyder’s way of saying “he doesn’t want to kill people.” 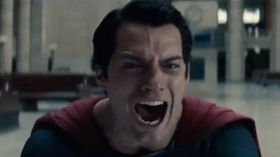 By the end of the movie, I didn’t dislike it, I just felt like I was missing something.  Like there was a half-hour that would have put more texture to everything and made it feel more Superman-like.  Maybe a little more of Jonathan just being a good dad and not a zealot.  Maybe a little more of Clark being Clark as an adult.  Something was missing for me.
Earlier in the movie they do a good job of showing Clark quietly doing good deeds that only he can do.  I didn’t want another Superman movie where the most amount of action we got was Superman lifting heavy things or ignoring physical threats to himself.  We have ample examples of those in the previous Superman movies.  But Clark doing good deeds did just kind of feel right.

I didn’t dwell on the destruction in Smallville and Metropolis much, other than to agree that a fight between Kryptonians under a yellow sun should probably be pretty devastating to the surrounding terrain.  I didn’t entirely jump on the bandwagon when people started mentioning what the assumed body count must have been in the Superman/Zod fight.  I guess I just assumed that if we didn’t literally see people dying, its possible people were evacuated, or that we didn’t see the efforts made to steer towards buildings already abandoned.
I didn’t see it as a given that thousands of people had died, at least not during the fight between Zod and Superman.  I can see Zod’s machine killing thousands right off the bat, but he’s the villain, he started all the crap.

I did see that it might be something that I felt was missing.  Not that Superman had let thousands die thoughtlessly as he fought Zod, but that the movie didn’t show us him scanning buildings for people before he threw Zod into them, that we didn’t see the few seconds he might have taken to fly a few people to safety before Zod pulled him back into the fight.  I didn’t assume massive carnage, or a heartless Superman, I just thought that it was perhaps a mistake not to emphasize that those more compassionate things might have taken place.
My hope, before we found out that Man of Steel wouldn’t be getting a direct sequel immediately, and that we were instead getting Batman versus Superman, was that we might get some context to the first movie.  We’s seem more Clark with his supporting cast, maybe see him agonizing over the fact that he tried to save people but couldn’t.  We’d get to see him fight a threat that isn’t connected to him at all, so he could be a hero without any reservation, as he saved Earth from someone of something that wasn’t connected to his won past.

But that doesn’t appear to be the case.  The trailers we’ve seen so far seem to indicate that maybe Clark’s heart was in the right place, wanting to defeat Zod, but that he wasn’t such a great super hero, and probably did let a few thousand people die because he was careless and fixated.  In fact, depending on if the clues line up as they appear to be, with might have another movie that kind of says that Earth may have been better off if Krypton had blown up and taken everybody with it.
I didn’t dislike Man of Steel when I saw it.  Had a sequel framed the first movie in slightly different terms, and filled in the gaps, I may have still had fond memories of the movie.  The problem is, Batman versus Superman seems to be wanting to own the criticism that the internet leveled at Man of Steel, and build their story on that, rather than telling people that maybe they assumed the worst.