An Anti-Icon For 13th Age 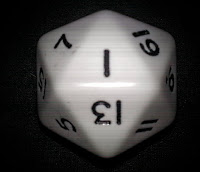 +Jefferson Dunlap in the 13th Age community on Google+ mentioned that he wanted to add Lolth to his 13th Age games and was interested in brainstorming how one would do this.  I came up with some ideas.  It doesn’t look like many folks were particularly interested in said ideas.  That said, I tend to like to preserve ideas that pop into my head one way or another, oftentimes on this here blog.

Yeah, that’s right.  If you are one of the 7.346 repeating followers of mine, I just admitted that this blog is a dumping ground of half-baked ideas I don’t want to lose because I have a terrible memory and lack the good judgment to come up with some better database solution.

As an aside, this also allows me some plausible deniability.  When I have my typical dumb ideas and somebody has a lapse in judgment and actually uses one of them, I can point to the blog and say, “I have never hidden my varying degrees of mediocrity and/or outright lack of good ideas,” and I think I’ve covered myself pretty well.

So, now that I’ve warned you this isn’t so great, for some reason I kind of like it, and maybe someday I can use it in a manner that isn’t groan-worthy.

The Spider Queen is the daughter of the Elf Queen of an age lost to the mists of time and of her era’s Diabolist.  She inherited the beauty and grace of her mother and the destructive plots of her era’s Diabolist, and for the destructive and manipulative web she wove in her time, she was banished to the Abyss, for such was her power that she rivaled the Icons of her age.

The Spider Queen appears to be a beautiful dark elf, but she can appear to be a great, venomous spider, or a hybrid of elf and spider if she wills it to be so.  It has taken her thousands of years to climb back from the depths of the Abyss, but this is not her first attempt to return to the world, and if she is thwarted, it is unlikely to be her last, unless some hero were to put a permanent end to her threat.

Upon drawing near to the mouth of the Abyss, her demonic power is almost always sensed by the Great Gold Wyrm, who knows better than to allow her to escape. The current Diabolist is also wary of her return to the world, for fear that the demons under her influence would turn against the Diabolist and her established power structure.  The current Elf Queen knows of the Spider Queen, and while the shard of her soul that she shares with all previous Elf Queens grieves for her lost daughter, she knows the danger she represents.  As a powerful demonic presence, she is naturally an enemy of the Crusader, and the High Druid resents her corruption of spiders and venomous things.

No Icon is truly positively disposed towards her, but in some dark corners of the world, some may have heard whispers that the Prince of Shadows is willing to deal with her, just a bit, to help with a little matter concerning the Dwarf King.

The ultimate goal of the Spider Queen is to escape the Abyss and begin to subvert as many Icons and their power bases as possible.  While she draws too much attention when she attempts to escape bodily, her demons manage to slip through from time to time to further her machinations.  One particularly dangerous breed of demons under her sway is the Queen’s Hatchlings.

The Hatchlings appear to be demonic, wholly unnatural giant spiders.  Their goal is to find and infect dark elves with their venom.  While poisonous to most, dark elves that would otherwise die instead are transformed by this venom.  Some merely become servants of the Spider Queen, but somewhere in the world, there is said to be a dark elf that can bear the essence of the Spider Queen.  That dark elf, if infected with a Hatchling’s poison, will eventually transform into the Spider Queen, in the flesh, subverting the gateway blocked by the Great Gold Wyrm entirely.

Purpose in the Campaign

The Spider Queen is a sort of “anti-Icon,” a creature that can serve as the ultimate villain of an entire campaign, to be defeated at the end to save the world and maintain the natural order. In fact, if you want an excuse for multiple Icons and their agents to work together, and you don’t want to pit your player characters against one of the Icons for your big campaign moment, the Spider Queen is your monster, because she’s got some history and “feels” like an Icon, while not quite being one herself.

Tracking down demons loyal to her, especially the Queen’s Hatchlings, can be a recurring theme, and finding a dark elf that has been infected and assessing the threat can also make for another thematically important adventure.  If you feel really cataclysmic, you could have the Queen herself finally break out of the Abyss, perhaps even finding a way to poison the Great Gold Wyrm, and the only way to reseal the rift is to throw her huge carcass back into the rift and perform a powerful ritual, either to purge the venom from the Great Gold Wyrm or to change the Spider Queen into a catatonic reflexive gatekeeper herself.

Personally, if I use this idea, I’m likely to go with the name the Spider Queen, rather than Lolth.  She’s got all of the earmarks . . . ties to dark elves, spiders, and demons, secret shame of the elves, trying to manifest fully in the world and cause chaos.  But by using a title, that kind of sets her up there among the ranks of the Icons, of something so important that its true name is secondary to its singular mantle.

It also means that her unique elements can be played up if you want her to really be more tied to the 13th Age setting, with just a wink and a nod to the source material.  You can go full-on Yochlol demons and driders, or you can just use regular demons, giant spiders, and custom-built Queen’s Hatchlings and dark elves about to undergo apotheosis.