What Do I Know About Reviews?–Edge of the Empire: Suns of Fortune

The first book that I’m going to review from my infinite backlog of RPG books just happens to be one that I read quite a bit from in the past, but recently read cover to cover. It was one of the earlier releases from the Edge of the Empire line of Star Wars RPG products from Fantasy Flight, a soucebook on the Corellian Sector call Suns of Fortune.

Suns of Fortune came out in early 2014, and while there had been “class” sourcebooks for the Edge of the Empire game previously, this was the first location based sourcebook for the game, which would be followed in the Edge of the Empire line by Lords of Nal Hutta, and in the Age of Rebellion line with Strongholds of Resistance, and most recently with the Force and Destiny entry, Nexus of Power. 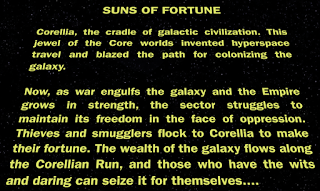 Reading this book cover to cover, now, reveals a bit of a shift in how Fantasy Flight was handling the story based material of the Star Wars game. This book feels much more clearly dedicated to showing you Corellia as interpreted in what is now the Legends continuity, up to the point in history that the Galactic Civil War happened. While there is a lot of game-useful material in this book, the book feels as if it is a bit more concerned with presenting “facts” than some of the more recent Star Wars books.

While it’s not easy to call out specifics, more recent Star Wars books from Fantasy Flight have been more–impressionistic, to attempt to give it a name. There are facts here or there to hang a campaign on, but there is a lot of “stories say this” or “at one time people believed this” information, allowing Fantasy Flight to draw from the current Star Wars continuity as well as the Legends continuity, while pointing out that the book is really about giving GMs tools to make their own version of the galaxy.

If it isn’t obvious at this point, and if you don’t want to do the math, this book was written before the Disney purchase of Lucasfilm, and before the designation of previous Expanded Universe material as a separate Legends continuity.

She Looks Better Than the Falcon

The book is 144 pages, and the design and artwork are spectacular. This book came out close enough to the old Star Wars Saga era that the shift from whitespace and recycled art was pretty staggering (yeah, I know, Fantasy Flight recycles art for their card, board, and minis games, but that all makes sense).

Into the Chute, Flyboy!

Before I dive too much into the content of this book, I have to address the Ronto in the room. Back in the old days, when all we knew about Corellia as that Han was from there, they made big ships, and Corellians seem to have a reputation as pirates, smugglers, or adrenaline junkies, Corellia seemed to be a wild, awesome place.

Then Roger MacBride Allen wrote the Corellian Trilogy of novels back in 1995, and instead of getting space pirates, racing, and smuggling, we got an ancient alien artifact that holds the system together, two races that share the system with humans that generally don’t do much other than keep to themselves, and Corellians that really like political maneuvering and games. To me, at least, the Corellian system got a lot less interesting once these books came out. Corellia doesn’t seem a whole lot different than any of the other core systems, except for what goes on the “exports” line of the profile for a planet.

Because this particular book spends a lot of time being a sourcebook for the Legends version of continuity, we spend a lot of time revisiting the less interesting aspects of Corellia. The Drall and Selonians get a lot of pages devoted to them, even though both are species that rarely leave their home system, and, for different reasons, don’t particularly like adventuring.

While the book is about the Corellian Sector as a whole, starting with the Corellian system and detailing all of this information slows down the pace immediately. Edge of the Empire is suppose to be the Star Wars RPG line about rogues, scoundrels, and explorers. What we get to start is a really well established, mapped out Core system with multiple species of homebodies.

To be fair, when the material dives into some of the political aspects of Corellia, of its former special status in the Republic and how that has changed, and even the ancient information that the Drall might have at their university, you get some great opportunities for Age of Rebellion scenarios. But that just makes this sourcebook feel less focused. I personally like the division of Star Wars RPGs by theme, and providing “generic” information, instead of criminal or explorer angles undermines what the product line split can effectively do. 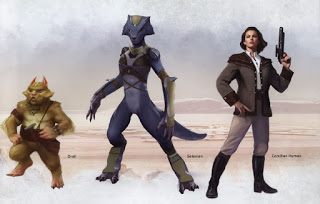 Elements of Corellia are touched on that I would have loved to have seen played up. There is an asteroid belt in the system with competing bands of pirates, some native Corellians, some outsiders sponsored by Hutts and Black Sun. I want to hear more about these pirate gang wars. There is also some talk about CorSec, the Corellian equivalent of the Texas Rangers, introduced by Michael Stackpole in the X-Wing novels. But there isn’t a lot of CorSec, and I think that was a mistake. Even a law enforcement campaign, in a system where learning what criminals you can deal with and what ones you can’t, and where you have the pressure of solving crimes quickly before the Empire decides it needs to be less “hands off” than in the past, could be great and still fit the themes of Edge of the Empire. But CorSec is almost an afterthough in the book.

When the book moves out into the Corellian Sector, things get a lot more interesting. Only a few of the planets get as detailed a section as the planets in the Corellian system, but they have tons of hooks like lost treasure, corporate espionage, planets with super rare artwork, and ultra expensive custom ships. The rest of the Corellian Sector feels the way I wish Corellia itself did. I also get the feeling that the lack of Legends details on some of these planets allowed the staff at Fantasy Flight to fill in some details in a manner more consistent with the tone of the Edge of the Empire game.

So while there is information on interesting locations for Edge of the Empire adventures, the least interesting places seem to get the most word count devoted to them.

Boy, It’s Lucky You Have These Compartments

The more rules oriented portion of the book has to do with weapons, equipment, and vehicles, as well as providing game stats for the sapient species native to the system, allowing them to be used as player characters.

As far as Corellian gear goes, it’s pretty standard. Some interesting things, like armored greatcoats and vibro-cutlasses, but nothing really jaw dropping or iconic, because, well, Corellia is a place that is kind of geared around selling it’s stuff to everybody else. There are a few Corellian freighters in the book as well, but they aren’t the most iconic ones, because those are already in wide use, and thus show up in other Edge of the Empire books.

None of that is bad, it’s just not essential.

Then we get to the actual species native to the Corellia system. Drall and Selonians are both okay. I didn’t see anything in their stats that made me think that they were over or under powered, but given that both races tend to stay at home, and we don’t have many famous examples of either of them, they seem like “required” rather than “inspired” entries into this section. Maybe if that section on running a CorSec campaign had been in the book, I could have been more excited about these two species.

Then we get to Corellians. I’m just going to say, if you allow this book in your campaign, it won’t be game breaking, but if you have a PC that intends to be a pilot of any kind, they are going to be Corellians from this point on. Corellians get to break the limit of two ranks in a skill for beginning characters, unlike just about every other species in the game. In the long term, standard humans and other species might catch up, but anybody that wants to be a good pilot right off the bat is going to probably take this.

I mean, not only are the stats just better, but your NPC examples of Corellians are people like Han Solo and Wedge Antilles. I would not be surprised if “pilot” and “Corellian” aren’t synonymous at a lot of Fantasy Flight Star Wars game tables. Personally, I would have rather Corellians got a more thematic advantage, like gaining a boost die when in a race or in a chase scene. It seems as if it would have reinforced the cultural psychology rather than just saying Corellians are literally born better than anyone else at piloting.

You Don’t Have to Do This To Impress Me

The last section in the book contains modular encounters, encounters that aren’t quite a full adventure, but can fill in for one with a little fleshing out. They are all tied to some location in the Corellian Sector, and thematically, they all work a lot better with the Edge of the Empire theme than the general source material presented in the initial section. There are encounters that have to do with gambling, racing, theft, avoiding the law, dealing with corporate spies . . . all very thematic to what you should be doing in an Edge of the Empire game.

These are all pretty useful if you just want to drop some Corellian flavor into a game or you just have a short night of gaming and you want to have some kind of scene ready to go, and the fact that all of these seem to keep in mind what Edge of the Empire is framed to do tells me that a lot of that first section was the way it was because, ironically, obligation to present the Legends continuity version of the setting.

You Do Have Your Moments

Is the book worth picking up? I’d say yes, but not as a “tier 1” kind of book to flesh out your Fantasy Flight Star Wars collection. It’s pretty and well designed, and it’s perfectly serviceable, but there are a few square pegs and you have to do some work to dig for the adventure hooks you will likely want to use for your game. The book actually picks up utility if you play the other Fantasy Flight Star Wars games, but I think I would still give the game a solid three stars out of five.