What Do I Know About Reviews? Beyond Damage Dice (5e OGL)

This is a shorter supplement, so I’m not going to break the review down quite the same way that I have other products. Beyond Damage Dice started as a series of articles on the Kobold Press website, and those articles have now been collected into one volume that details additional properties for weapons that can be used as optional rules in 5th edition D&D. 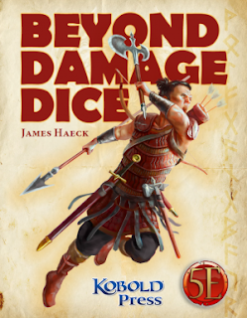 This is an eleven page PDF counting the front cover, OGL, and the ad page at the back. The book itself has artwork on the cover in full color, and the interior pages are in color and formatted in a similar way to other Kobold Press books, with kind of a parchment appearance. The weapon illustrations in the book are done in black and white line art. Overall, it’s a very professional looking product, but with slightly more minimalist artwork than you would see in an adventure, sourcebook, or monster book.

How Is It Organized?

The book has a very short introduction, then presents existing weapons from the OGL by section (swords, polearms, ranged, etc). Then there is a section for Midgard weapons, which are actually less exotic than they might seem. Instead, these are weapons inspired by real world weapons that tend to just get folded into one of the broader categories of weapons in the D&D rules, like estocs or poniards. The final section is Southlands weapons, which introduce a few weapons with special abilities inspired by various nations and factions in that section of the Midgard setting, and includes things like hooks and stilettos that can inject poison.

The built in balancing factor in this book is that anyone using these weapons that is proficient with the weapon can use the new special abilities. Some of the special abilities are really evocative, and may not come up that often, but seem really cool when they do.

For example, using these rules, when something forces a character to make a Strength save to resist being moved, and they have a greatsword, they can use a reaction to dig it into the ground and get a bonus to the save. Just reading that paints a picture in my head. Longswords, if still sheathed when a fight starts, allow you to make an attack with the pommel by drawing them. It won’t do damage, but may stun your opponent as you hit them with the end of the weapon as you draw it. Those are the things I really like.

Do you like how streamlined 5th edition combat is compared to 3.5 or Pathfinder? If that is one of the things that draws you to 5th edition, this supplement is going to reintroduce a lot of things that you may have found you would rather live without. Depending on the weapon used, you can use reactions to add a variable amount to your armor class or to parry attacks. Some weapons can damage armor or even natural armor class. Other weapons can be used to grapple an opponent to keep them from speaking, or just ignore a shield when used. Would you rather do damage over time and not have to hit, by skipping the initial damage of the weapon? There is a weapon that does that, too.

Any one of these options may not be so bad, but incorporating all of these extra abilities not only makes the options more complicated when choosing weapons, but it also add a lot of extra reactions or bonus actions. In the core of D&D 5, there tends to be a manageable number of things you can do with a reaction or a bonus action, but this increases those based on the equipment you are carrying.

This system doesn’t ramp up the complexity in the same way other game systems might, with feats or other ways of tracking why you have access to these new options. If you adopt this system, it goes for anyone proficient with the weapon, which is nice. In a way, it makes its own balancing factor, because the GM can use these for his NPCs just like the players are using the options.

That’s also part of the downside. I haven’t played with these rules, but it seems like you could easily have fights bog down a bit where one player is rolling for their extra AC from the rapier options every round, and NPCs and PCs are parrying blows left and right. While it makes for an interesting narrative, it also undermines some of the natural flow that 5th edition combat already has.

The new abilities often don’t require you to sacrifice something in order to make the weapon more awesome. For example, if you hit someone with a greatclub, you can just knock them down. You still deal damage. If you are fighting more than one enemy within your reach, you can hit both of them with your greatsword. You don’t take a penalty. Again, this is balanced by the fact that anyone using a greatclub or a greatsword can do these things, but that also makes combat more complicated. In fact, it also means that GMs may want to spend more time changing default weapons from their NPCs, either to make them more or less effective. It’s probably because I’m currently running Storm King’s Thunder, but my thoughts on reading how greatswords work in this book immediately made me think that I would need to warn PCs about Fire Giants before they fight them, because if you have two PCs gang up on a Fire Giant (like the paladin and the rogue might normally do) that Fire Giant can now potentially hit them both twice instead of just making two separate attacks on it’s turn.

The rules very simply represent things like “sundering” by doing things like lowering armor class by one on a hit, but that starts to introduce aspects of the rules not covered. Does natural armor class heal when a creature with “sundered” natural armor heals hit points? What rate does armor heal? How much does it cost to fix damaged armor, or is it just a skill check?

Flails are going to be the bane of clerics with these rules. Wizards already don’t want to get in the front of a fight, but clerics can use shields, which flails can ignore, and if your opponent decides to grapple with the flail instead of attacking normally, they just shut down verbal component spells.

This one is really hard for me to score. It’s well written, and has it’s own kind of natural balancing elements by changing everything about the weapons detailed . . . but it changes everything about how certain weapons affect combat. If you liked 3.5 and Pathfinder, and you want a little bit of that tactical flexibility back in your 5th edition game, you will probably like this book. On the other hand, I really feel like this book dramatically changes the pacing and flow of 5th edition combat to where this isn’t a simple book to introduce. I also feel like some of the changes the book introduces aren’t as well thought out as they might be, such as how weapon changes will affect monsters using weapons or how damaging equipment may affect the game.

Because of the simple presentation, the fact that the options are straight up changes and not options that require some kind of sacrifice, and the fact that a lot of elements have a domino effect on other aspects of the game, I’m going to have to give it a ** (out of 5).

Like Loading...
tagged with D&D 5th Edition 3rd Party Reviews, Dungeons and Dragons, Kobold Press, What Do I Know About Reviews