What Do I Know About Reviews? A Glorious Death (Shadow of the Demon Lord) 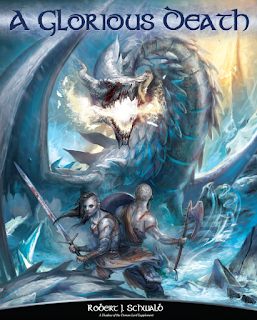 When I have biases that I can identify, I like to throw them out there. I don’t know why, but I’m a sucker for cold settings. Maybe it’s because I saw The Empire Strikes Back more than any other movie in my formative years. I don’t really prefer cold weather, per se, but I love visualizing a cold and icy setting when it comes to adventure stories.
While I know it’s not the most faithful representation of such, I also totally blame Walt Simonson for instilling in me a love of things that at least strongly borrow the aestetic of Norse myths and legends. Dwarves, hammers, giants, serpentine dragons—I love it all.
So I’ve got some biases. Read this review and know that in matters such as these, my logic may be flawed.
How Does It Look

A Glorious Death follows the later trend of Shadow of the Demon Lord books, in that the formatting is more of a departure from the core rulebooks. The pages are faux ice in appearance, with a snowy border, and the font differs from the core books as well. There is a generous amount of artwork, much of it revolving around pale things with vivid shades of blue, white, and yellow. While I mentioned the overwhelming orange and green in Exquisite Agony and Terrible Beauty in their reviews, something about how the blues are used in this book make them feel less prominent and more of an accent, but again, that may be my bias speaking. The artwork is great, the formatting makes the book easy to read, and the PDF is 48 pages long.
Into the Wastes

This section details the ancestries native to the region, mainly from existing ancestries in the game, but also ads the Jotun, 9-foot-tall giant blooded barbarians from which the orc race was extracted. There is a tailored section on what kinds of equipment natives of this region would have instead of the core rulebook offerings, new Interesting Things tailored to this part of the setting, and a discussion on the religions common to the region. There are also paths that reinforce the theme, including Juggernaut, Cryomancer, Seer, Skald, and Warrior Spirt, and new spells for the battle, curse, divination, forbidden, primal, rune, spiritualism, and water traditions.
To reinforce the power of the Jotun, they don’t take a path when they hit the Novice tier, but instead must take the racial options at that tier of advancement. If you are picturing them as half-giant Vikings, you probably aren’t too far off the mark.
The Frozen Wastes

This section of the book details some of the locations in the region, including some Faerie Hidden Kingdoms, and then goes into the secrets of the wastes, and some relics native to the region.
Like Tombs of the Desolation, there isn’t much detail on the locations in this region, but unlike that sourcebook, it’s because most of the settlements are relatively small places eking out a living in the cold. I think my favorite aspect of the region is the monster spawning goo that you might run into.
Nifflheim is a broken faerie kingdom that can be accessed from the region, and was also touched on in Terrible Beauty. Valhalla has an interesting place in the cosmology, and it turns out that it’s a bit more like a variant of Hell rather than an alternate version of Elysium.
Denizens of the Wastes

This section goes more into native people of the region as expressed as NPC stat blocks, as well as monster’s native to the region. A variant dwarf race called the Trow is introduced, and in typical Norse fashion, these guys are mainly obsessed with crafting things for the people around them.
Frozen Waste native faerie, genies, and giants are introduced, as well as native undead, kraken, lindorm, and furry frost worms. Valkyrie are an especially interesting spin on the traditional interpretation, as they do what Valkyries do—but a little different than you may expect.
Kill Them All

The PCs essentially run into a settlement of Jotun, try to fit in, find some trouble, and decide what order to solve the trouble in, or else it gets worse. The adventure provides the nice twist of forcing the PCs to make some hard choices and do their due diligence or get a mixed “happy ending,” and also incorporates the larger theme of the encroaching void into the story as well.
This adventure has a fairly simple setup, but on top of the Shadow of the Demon Lord “twist” of forcing careful choices or seeing bad things happen, and the thematic threat of the Void looming, there is also a really nice set of tools for portraying native Jotun that has use outside of the adventure.
This Axe Has Lost Its Edge

The sourcebook presents its setting well, but it is a very specific setting. If you don’t like cold and snow, you may not want to wade through this content. The other thing that bothered me, and it’s my own strange quirk, is using any specific names of Norse deities. I don’t mind the “echo” of similar concepts, even place names, as touchstones. But given how gods and belief work in the setting, I’d rather have seen a complete break from actual Norse names, even if some of the archetypes were obvious. That may just be my issue.
This Axe is Really Big!

It may just be my biases, but given that Norse themes already incorporate a kind of fatalism and the looming end of the world, this material seems to be well suited for the region as well as making it fit well into the setting as a whole. Things like the Eitr (the goo that spawned all life, but now just spawns monsters) reinforce the growing corruption of the world, while giving this section of the world its own unique toys.
Wyrd Up

This sourcebook hits all the right notes. It’s a specific region, with its own specific feel, but it also ties well into the main campaign setting. It adds to the cosmology without changing it. While adventuring hooks often boil down to “why wouldn’t you want to adventure,” the book also presents a culture that reinforces this worldview as well, and then provides tools to support all of that. As I said in the previous sections, the only things that knock this down a few pegs are that, while Norse themed material fits well in the Shadow of the Demon Lord setting, it’s not really in short supply in greater gaming supplements, and the focused theme may not appeal to everyone. Still, I have to say that this is one of the sourcebooks you want to put on your shortlist to buy when you first invest in Shadow of the Demon Lord.