What Do I Know About Reviews? Ghost Planets (Fate Core)

Posted on 02/27/2017 by Jared Rascher Leave a comment
Aside from one playtest session of the upcoming Star Trek Adventures RPG from Modiphius, I haven’t had much of a chance to do Star Trek gaming. I’ve got fond memories of watching the original series with my brother on Sunday nights, staying up past my bedtime to see the end of the episode. In many of those episodes, the crew didn’t have much contact with the greater Federation, they would run into a problem, and have to come up with a solution, often using logic, diplomacy, or science (yeah, even in the original series).
I’m also a sucker for humans traveling out to the stars and sticking their noses into things they don’t fully understand. Sure, Aliens is a horror movie, but it’s also a “what’s out there that we didn’t know about” story.
Ghost Planets merges these two ideas in a setting where humans are the only current intelligent life, but that wasn’t always the case. The PCs are trying to figure out why exactly humans are alone now, exploring ruins of alien civilizations, trying to figure out what happened to them. So right there, they have my interest. 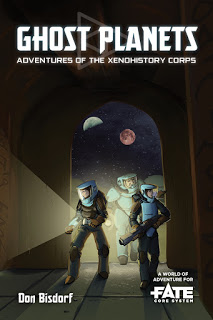 Report: Document Parameters and Specifications
The PDF is formatted in a manner very similar to the main Fate rulebooks, which is very similar to how the Worlds of Adventure line is formatted in general. Formatting is very clear, with solid white page backgrounds and solid color banners to denote sections and sidebars. Its very clean and readable, and while it may lack the flourish of some RPG products, it is also very professional looking. The artwork that appears is simple but well done, generally dark, and showing researchers and explorers in alien ruins and in labs, as well as showing what the ships, robots, and gear in the setting look like. There is also a simple galactic map that shows travel times to systems in different parts of the galaxy. The PDF is 55 pages long.
Getting Started
This section details the setting in broad strokes, explaining that the PCs are expected to be explorers sent out to alien worlds, looking to find why alien societies died out, and to determine if that was due to an Omega event (they caused their own demise) or a Sigma event (a mysterious event associated with a strange travelling anomaly that appeared right before many species died out). Part of what the PCs are trying to do is to find out how to keep humans from suffering the same fate as the other alien civilizations by learning what the Sigma events really stem from.
This section omits a few skills, consolidates others, and ads a few new skills. This differs from Fate Core skills by making piloting and combat simpler, and dividing up some science and investigative skills. There are also six roles that PCs are assumed to be filling, which should be worked into the character’s high concepts. There are also some pre-made skill packages based on some assumed professions that a character might have, and a discussion of how the new skills can be used in light of the four main actions of Fate Core.
Xenohistory
This section goes into how the players do the “important” part of their job, and also happens to detail what sets this particular setting apart from other Fate games. Essentially players determine what they are researching and work with the GM to determine what skill they are using to do that. The GM sets the difficulty and how long that discovery will take, and the player rolls to see if they are successful.
What is interesting about the process is that the player won’t fail to make a discovery, but depending on how well they make the check, they might have some complications arise. For example, they might set loose a dormant virus that the team has to deal with while doing their research.
The chapter goes into some detail about what happens if they leave the site early, how other players can help out, and running multiple research projects at one time. Reading this setup really hit the on the Star Trek notes for me. The primary focus being the thing the group is researching or trying to learn, and things like killer native animals or whatever are complications to make things interesting, not the main focus.
As much as I like this section, when I first read it, I was confused about how discoveries actually worked. I initially thought that the person researching literally came up with they wanted to discover, and thus the research and the story would be a bit more character driven. Reading further in the chapter clarified that the player is just generally telling the GM what they are looking into, in broader terms, based on their specialization and what the GM has described, and the GM has a set of previously determined discoveries ready for the site, and chooses one of those discoveries that matches the kind of research the player described.
I have to admit, I would have liked the more player driven method, and wish there was some support for a more open ended, player driven version of the system. I know that improvising this isn’t too difficult, but some building blocks or prompts for something more open ended might have been nice for a more “randomized” mission.

The Sigma Event
This section goes into what the Sigma event is, what the signs of it are when the players investigate a site, and also details a previous alien organization that was also looking into the Sigma events. There are a few recurring signs that pop up, and this section details those.
There is also a section that goes into what the Sigma events might actually be. There isn’t one answer to the question, so that the GM can tailor the campaign to what works best for the campaign. I like this approach, but I wish there was a little more detail. I would have liked a few more possible Sigma event “truths,” as well as a little more detail within the sample Sigma events. It feels like that would have been a good support for a longer campaign.
Our Place in the Galaxy
This section goes into what the history of humanity was up to this point, the structure of galactic government, what organizations exist, and what people have learned about the galaxy so far. It also details the level of technology that humans have achieved in the setting.
Equipment
The equipment chapter explains the ships and gear that a team of Xenohistorians would have with them on a mission. While a few of these pieces of equipment give a situational bonus to some checks, overall, the purpose of this list of equipment is to explain what PCs can assume they have, and anything special they come up with can be a created asset. If you are familiar with Fate, this setting doesn’t deal with weapon and armor ratings, but assumes that extra gear and the like is giving you a boost beyond the tools you have to do the job.
Scale also exists in the game, but it’s very simplified comparted to other versions of scale rules.
This is another section that greatly reminds me of classic Star Trek. It’s not that combat would never happen, but it’s one of many things that could happen, so the rules for resolving combat are fairly simple and don’t use a lot of extras.
Farther Stars
In this chapter, we get a simplified galactic map which shows a few known planets in the galaxy that are noteworthy and their special relationship between them. This lets the GM know how long travel times are, and sets up the notion that there is a well settled section of the galaxy, a frontier with colonies, and a great unexplored expanse.
There are a few sections in the book that make me feel this way, but I really like this concept and what appears in this book, so I wish this section had been expanded just a bit, with a few more details on the established planets, and a few more planets.
Missions
I really like this section, because it explains the standard procedure for what the Xenohistories should be doing, what to do when things go wrong, and when the team should pull out of a site they have been exploring.
What’s nice about this is that the details of the mission are where the fun is at, but having the structure makes it easier for the GM to determine what details they might need to have ready. Given that the rules for discoveries mention what happens when the players might pull out, it’s nice to have guidelines for why the PCs might decide to pull out.
The Doomsday Clock
This is a sample adventure in the setting, where the team runs into a scientific team that has arrived before them, and must determine how to get an alien machine back online, determine what the strange activations mean, survive some automated defenders, and possibly secure technology that could be very beneficial to humanity in the long term if it can be fully understood.
It’s a good adventure to give you an idea of the components from the rest of the book can be put together, so even if you don’t run the adventure, it’s useful to see what the rest of the book might mean when it talks about things like setting up discoveries. 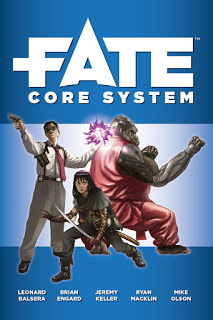 Report: Unexplained Anomalies
The discoveries section is a little confusing at first, although it’s clarified fairly quickly in the same chapter, and with the examples in the adventure. Some support that could have been given for longer term campaigns, like more detail on established planets or the Sigma events, don’t get as much detail as they could have.
Report: Fortunate Discoveries
The setting is very evocative of exactly what it mentions as it’s inspiration. It Star Trek with an archeological spin, and the action is staged in such a way that your pistol never needs to come out of its holster, but it can, and it should still be pretty exciting.
Final Report: Status
If you like Fate, Star Trek, or scientific exploration, you probably aren’t going to be too disappointed with this purchase. Its solid for creating an interesting story arc, although it could have supported longer, more varied campaigns with a little more information on Sigma events, established locations, and maybe a few more sample lost civilizations for the GM to flesh out.
*** (out of five)