What Do I Know About Reviews? Red Planet (Fate Core)

I grew up in the 80s. I know a lot of people that grew up in that time period remember things like The Day After scaring the crap out of them, and being in a heightened state of concern over Global Thermal Nuclear War. I get that, and I remember that, but maybe I’ve always been a glass half full kind of guy, because I remember a lot of hopeful stories about “hey, we just figured out the Russian guys we met are friendly” at the same time.

Sure, a lot of those stories were kind of awkward and definitely skewed towards “we taught them how awesome capitalism was, and now we’re all humans, deep down.” Ironically, that kind of ideological conversion plays right into the product I’m reviewing.
Red Planet is a book about pulp space opera adventures, but it’s through the lens of the Soviet side of pulp future sci-fi. In this case, the book is about a fictional future communist state where everything works the way communism does on paper. This means casting not only the USA as potential bad guys, but also the USSR, for being a failed model of communist. I won’t go too far into the details ahead of the chapters themselves, but it’s worth noting the unique approach being used by the setting. 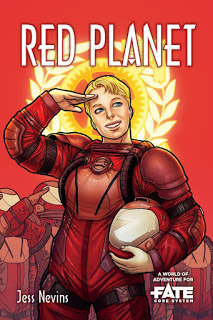 Utterly Functional and Utilitarian Appearance for the Masses
Like Ghost Planetsand most of the other Worlds of Adventureproducts, Red Planet is formatted in a very simple manner that matches the formatting in the Fate Core book itself. It’s clean, easy to read, and lacks the flourishes of a lot of modern RPG books, but still looks very professional. The artwork is clean and very colorful, and has a definite pulp/comic book feel to it. The PDF is 60 pages long.
Introduction and Welcome to the Red Planet
There is some introductory fiction in the form of a commencement speech at the beginning of the book, and then the chapter launches into an explanation of pulp, the assumed technology level of Red Planet and how science is treated in the game, and a quick tour of what the solar system looks like in this setting.
Early on this chapter hammers home the point that this setting is based on the pulp fiction produced by Soviet era sci-fi writers, but the setting itself doesn’t present the USSR as the good guys. There is a whole page detailing bad things done by the USSR, and states that this is a space opera assuming that not only could a communist utopia exist, but that communist utopia has its own axe to grind with the USSR of this setting.
The setting itself is essentially an alternate reality where there were three communist revolutions, the final one seeing the Union of Materialist Republics breaking away from the USSR and moving to Mars. The USSR are oppressive bad guys that use communism as an excuse to oppress the people, the USA has let corporate interests take over their political process and corrode their idealism, and the Mars based communists are the only guys “doing it right.”
Beyond the political scene on Earth, however, this alternate universe has a lot of pulp tropes in evidence. All of the planets in the solar system have breathable atmospheres, although some are far more livable than others. There are sentient alien species on Mars and Venus, and there are alien animals all over the solar system and space pirates hang out in the asteroid belt.

Character Creation and Classes
This section of the book concerns itself with altered skills and new stunts native to the setting, as well as presenting the different castes of the culture, which carry with them bonuses to certain skills. Of particular note is that a character can change class depending on what they have done and what they feel they can contribute, so these aren’t assigned at birth and adhered to forever.
Because this is a pulp setting, many of the stunts emphasize two fisted action and daredevil piloting stunts.
Another noteworthy addition to the Fate Core rules is the section on Conversion. Some bad guys are meant to stay bad guys, but because this setting is trying to emulate the bright optimism of many of the pulps from this era, having a conversation with an American or USSR spy, or giving a speech to the oppressed masses of a space colony, can allow you to convert people to the superior ideas of your native government. It’s a simple system, but it is also one that could be useful to port to other games where characters might try to proselytize and recruit to their cause.
Spaceships
What a game or setting chooses to detail definitely helps to show the assumed tropes of the game, so having a section on spaceships tells you that dogfights and starship combat is something that is supposed to happen (if you didn’t already get that from some of the feats in the character creation section).
This section also has some stats for planes and dirigibles, as atmospheric piloting is just as “pulpy” as shooting through the void of space. There aren’t any major additions to the Fate rules here, but individual ships or vehicles are given aspects, notable weapons and armor, stunts, stress, and consequences.
While not expressly called out before now, this particular setting for Fate uses the weapon and armor rules, meaning that combat is a little bit more granular in this game.
Common Technology
Various pieces of technology are called out in this section. Tools tend to just have an aspect to them to explain what they do fictionally, while weapons have weapon ratings listed for them.
Typical Non-Citizens
This section has the Earth based spies, other dimensional bad guys, pirates, aliens, and space-born animals called out as examples of what PCs might run into in the setting.
34 Chernykh
The sample adventure has the PCs chasing after a thief into the asteroid belt and finding a larger conspiracy going on. Owing to the pulp inspiration, it jumps right into the action, and there are some interesting adventure specific challenges and options for doing things like using the Conversion rules from the character creation section.
At the end of the adventure are some pre-generated characters, and these are useful to show the range of PCs that can be created for the game.

Terrible Rhetoric
I would have liked to have seen a bit more in the way of campaign frameworks. The setting is very broad and varied, and it might have been nice to have a couple pages detailing that maybe PCs will be spies, and this is how this should play out, or maybe they are fighter aces, and this is how that would play out.
Rousing Speeches
This book does a lot with a relatively short amount of space. The solar system is a pretty broad setting with a lot of adventure potential hinted at. Normally that kind of depth of setting in a book this size would come at the expense of specific rules for the setting, but there are several setting specific stunts and rules applications as well.
Glorious Renown
For a product of this size with kind of an established format for the product line, this book gets a lot done. There are a lot of implied adventures that would take quite a few sessions to explore, and the book also has a solid number of examples to see how to use the setting and the types of characters that are assumed in the game.
If you like sci-fi, pulp action, and Fate, there aren’t many reasons to skip this book, and a lot of reasons to bump it up on your list of things to look at.
****(out of five)