What Do I Know About Reviews? Worlds Numberless and Strange (The Strange RPG)

Monte Cook is a well recognized name in the RPG industry, and when he launched the Numenera RPG in 2013 . . . I kind of paid attention to it. It sounded interesting, but at the time, I didn’t jump on board. Both the setting and the mechanics sounded intriguing, but not in the way that forced me to drop everything and check it out.

Then in 2014, another game using the same core mechanics, the Cypher System, came out. That game was The Strange, and it was the brainchild of Bruce Cordell (another well known name in RPGs). It didn’t take too long for The Strange to become one of those RPGs for me. And by that, I mean one of those RPGs that I really have a lot of affection for, that I have never gotten the chance to play or run.

Some human beings have the ability to focus really hard on these pocket dimensions in order to send their consciousness into them, and upon arriving, the new reality essentially builds them a new body that makes sense in the context of the rules of the fiction that inspired the pocket dimension. The personal travelling remembers who they are, but they also pick up some clues about what the “theme” of the dimension is and what the general rules are.

That is the kind of setup that hooks me. It’s the best part of stories like Dr. Who or Sliders, with just a little bit of a twist. Anything human beings may have imagined throughout history could spawn it’s own pocket dimension to be visited.

I’m not reviewing the game itself here, but I’m putting all of that preamble forward to warn you–I’m a total mark for the setting. Please take anything I say in this review with that in mind.

What I am reviewing in this post is Worlds Numberless and Strange, a book of recursions (those pocket dimensions I mentioned above) for The Strange, to supplement the material presented in the core book.

How Does It Appear In This Reality?

The PDF of this product (it is available in print as well) has 226 pages, with the last few pages containing ads for other Cypher System products. The artwork is a mix of re-purposed artwork from other Cypher System products and artwork used to illustrate new recursions and elements presented in this book. The art is very polished, high end RPG industry standard. While there is nothing wrong with re-purposed artwork in an RPG line, it makes a kind of thematic sense in The Strange, given how much the setting deals with iconic elements and archetypes.

Much like Fate products, Cypher System books have a very clean and consistent look to them across RPG lines, and they tend to look very polished and lack overtly artistic flourishes while still being attractive. Monte Cook’s self-published books have often had wider side margins that contain things like definitions and page references, to cut down on page flipping and to ease overall use. Monte Cook games continues this tradition, providing definitions, factoids, and page references in the side margins of the book.

Overall, its a nice balance between readability, functionality, and artistry.

The first section of the book provides an introduction, a primer on what is and isn’t part of the science fiction of The Strange, and ideas on creating recursions from popular media.

While many of the concepts addressed in this book were touched upon in The Strange core rulebook, I have to admit that giving the concept of recursions it’s own book, without the added extra focus of introducing factions, general RPG advice, and the core game rules, really does a lot to make some of the concepts in the core rulebook make more sense.

I have to admit, I have never really been able to warm up to Ardeyn, and page count dedicated to it doesn’t do much to capture my attention. It may just be my personal tastes, but for a setting that is suppose to be seeded by a fantasy MMO, it doesn’t work for me. The setting feels more like it is trying really hard not to be a standard fantasy setting, while still being a fantasy setting. 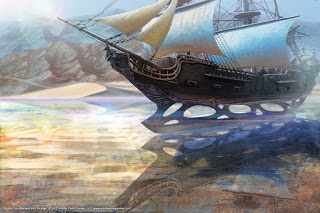 Many of the recursions in the setting embrace their tropes and either throw a twist to the setting or mash it up with another genre, with the real gameable material coming from the fact that the world isn’t real, and outside forces may be manipulating the tropes. It may have been fun to have seen a fantasy setting that leaned hard into MMO tropes, but instead, Ardeyn is presented as a distinct fantasy setting, and I guess that creates a disconnect in my mind that makes it hard for me to warm up to the recursion.

Chapter 5, however, is pure gold for me. In here we get a ton of new recursions. Not all of them work for me, but most of them do. Nearly all of the recursions have enough plot hooks in them that players will have a reason to go there, they will have reasons to deal with plots “within” the fiction, and some elements that involve a plot from “outside” of the fiction. This takes the form of other organizations that have established agents in the recursion or awakened natives.  Of the total page count, 134 pages are found in this section.

The fiction that populates this section is drawn from sources like stories of Atlantis, Arthurian legends, Nazis winning WWII, Halloween towns, lost world dinosaurs, shrinking down to live inside another organism, superheroes, alien contact with modern society, Star Wars, Big Trouble in Little China, Miyazaki movies, Samurai movies and anime, epic fantasy novels, and zombie apocalypse stories. That’s a pretty wide range of recursions to visit. Not only does that provide a lot of play space, but each recursion has a selection of artifacts thematically appropriate to that setting included at the end of the entry.

Chapter 6 is filled with quirkier settings with shorter write ups than those that appear in Chapter 5. Some feel similar to those recursions, in that they come from identifiable fiction with a twist here or there, and some are even directly connected to other recursions (such as Avalon, which touches multiple Arthurian themed recursions). Others are just really weird. Like recursions where you turn into a liquid or office supplies.

There are a lot of good ideas for places to visit in this section. There is a really interesting concept of a new faction introduced in the book and how they use a particular recursion as a sanctuary for agents that suffer from PTSD, and other similarly interesting ideas. That said, more than any other chapter, I wish we could get a bit more “meta” commentary on how these “recurions-lite” are meant to be used. Some don’t seem like they should actually be visited, but are they suppose to exist as horror stories told to agents of various recursion travelling groups, or is the GM suppose to come up with some clever way of using what amounts to cosmic dead ends?

A good GM is going to come up with their own answers. In this day and age, especially with the amount of forward thinking advice that the Cypher System games tend to provide for people running the game, it almost feels like a bit of a throwback that we can’t break the “in game” presentation of information to directly address GMs. It would be nice to give them a head’s up on what the best way to use some of the quirkier recursions might be.

This section of the book introduces new foci for players, and stats for creatures first mentioned in this book. Essentially, this is where the new mechanics are introduced in the book, but it does make me wonder–if the mechanics are reserved for this section of the book, why do the artifacts go with the individual recursions? It’s not a major problem, and I can understand that some artifacts aren’t just thematically appropriate, but very specific to the setting, but the organizational division still feels a little arbitrary to me.

Several of the Foci are very specifically keyed to some of the recursions introduced in the book. For example, in the recursion where you are humans shrunk down inside another organism, you can actually become a bacterial creature instead. In the Halloween recursion, you can become a Trick or Treater, which has special connotations in that setting. Other Foci are broader, such as letting you be a ninja, samurai, tattooed spellcaster, martial arts monk, and other themes related to the recursions introduced, but not super specific to one recursion’s quirks.

While it’s not mechanically more complicated than the rest of the game, being a spellcaster that tracks their spells does make for more bookkeeping that I would have preferred. The bacterial and Halloween foci are so specific that it would be a shame not to use them if you use the recursions they are tied to, because they don’t seem broad enough to get use elsewhere. That, however, brings up another slight issue. Foci have at least a few moving parts, so players should have access to them fairly regularly. But players don’t need the vast majority of this book. The line has a separate player facing set of rules that can be purchased by players, and I almost wish anything that  has player facing mechanics in it also had a separate option for players to get just that content.

Like the Foci, a few of the creatures are very specific to their setting (like the Glass Dragons), while others will have wider purpose (like the multiple flavors of zombies presented). 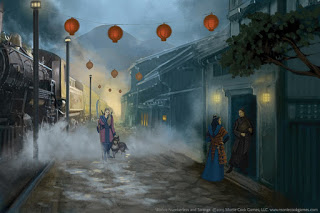 This section includes the index, and, more notably, the inspirations page.If something in one of the recursions might have sounded familiar, but you just can’t quite remember from where, it’s likely explained in this section. It makes for an interesting read, as well as providing some ideas on new media to consume.

Ardeyn and Ruk rack up a lot of pages in the game products, especially if you never end up using them. A few places in the book get a bit repetitive, such as the multiple places in the Rebel Galaxy entry where you are reminded that the recursion isn’t the size of a galaxy. The player facing rules aren’t easily accessed for players, who don’t have a lot of incentive to get the book except for a relatively small section. Some of the player facing mechanics are super narrow in scope.

The book expands on the best ideas from The Strange core book and gives them even more depth. New organizations are introduced in an organic way. There is an amazing variety of locations presented, with tons of adventure hooks.

Reading through some of my criticisms, it might not be apparent how much I like this book. None of those “negatives” are major issues, but the book introduces so many concepts and ideas that it’s hard not to ponder all of the various tools that appear in the book and how they might be used.

Despite a few minor concerns, I’ve got no problem recommending this product to anyone with even a passing interest in The Strange. Not only does it provide some great GM material, but it explains how elements work in the setting with even more depth than the core book, and in ways that spur the imagination.

Like Loading...
tagged with Cypher System Reviews, The Strange Reviews, What Do I Know About Reviews, Worlds Numberless and Strange