Downtime In a Galaxy Far, Far Away

Posted on 03/27/2017 by Jared Rascher Leave a comment
I haven’t mentioned it yet here on the blog, but I’m really enjoying the Tales from the Hydian Way podcast, a podcast dedicated to discussing the Fantasy Flight Star Wars RPGs. In their most recent episode, the subject of downtime came up, and that discussion spurred some ideas in my mind. 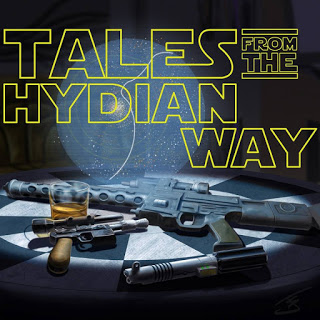 So How Long Are We Talking, Here?

My thoughts are that—as presented—these rules for handling downtime work best when looking at gaps that take from weeks to months in time. If you want years to pass between sessions, you might look at repeating this process up to three times, moving from each character in a series of rounds.

What Will You Do?

In general, to represent significant downtime, present the characters the amount of time that has passed between sessions. Ask them what they plan to do with that time, but make sure to mention any proscriptions that their chain of command might put on them. In other words, if they work for a specific crime lord, they might be told to avoid another crime lord’s territory. If they work for the Rebel Alliance, they might be assigned to a specific system or sector.

The difficulty of this check so be in proportion to the size of their Duty or Obligation. Larger debts are hard to pay off with minor side jobs, and it’s more difficult to impress your commanding officers with routine missions.
Force and Destiny characters will have a harder time, because Morality isn’t something that should be casually modified based on a narrative. Even the best player is going to have a hard time assigning themselves Conflict in a downtime narration, and Conflict really should come from active roleplaying.

Instead of using the above system, if a Force and Destiny character narrates downtime that incorporates their Motivation, the gain 5 XP. If they incorporate their Morality into the narrative of their downtime, the GM may grant them 10 XP instead.

Another topic that the Tales from the Hydian Way episode touched on was inspirations for the types of downtime activities a character might engage in. While Star Wars sources are good to look towards, I think it’s also helpful to look at wider narratives with similar themes.

Like Loading...
tagged with Force and Destiny, Star Wars Age of Rebellion, Star Wars Edge of the Empire, Tales from the Hydian Way