What Do I Know About Reviews? Kobold Guide to Gamemastering

Posted on 04/27/2017 by Jared Rascher Leave a comment
I love books, columns, and podcasts that talk about the act of running a playing a roleplaying game. I’ll admit it. I’m so deep into the hobby that not only do I love new games and settings and adventures, but I want to experience people discussing the hobby and the activities that make up the hobby on a “meta” level.
Since I was already redeeming a Kickstarter reward, I picked up the product I’m reviewing today the same way I used to snag a Snickers bar when I needed to pick up toothpaste and deodorant from the grocery store. I pick up way fewer Snickers bars these days, so I guess I can afford to impulse buy GM discussion books, right? I’m not going to do the math. I don’t want to be sad.
The book I’m talking about is the Kobold Guide to Gamemastering, a new product from Kobold Press. 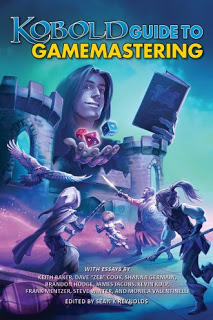 How Does It Look?
Kobold Guide to Gamemastering is a 154-page book, including a final page ad for other Kobold Guide books. The cover is a full color painting, and the interior is black and white, with only a few pieces of artwork, repeated at the beginning of each section, of a kobold getting ready to run a game.
In this case, I picked up the PDF and the physical book. The physical book is a digest sized book, similar in size to the later Engine Publishing books or the Explorer’s Edition Savage Worlds rules.
The formatting is clear, with bold section headings and well-spaced paragraphs. Overall it’s a clean format that is easy to read and navigate. 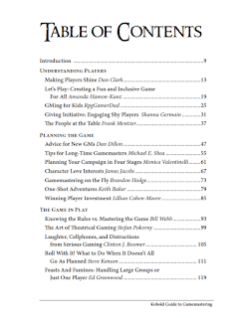 Understanding Players
The first section is a collection of essays on understanding players, with five essays on topics that all relate to the main topic. This section includes essays from Dan Clark, Amanda Hamon-Kunz, RpgGamerDad, Shanna Germain, and Frank Mentzer.
Topics range from making players shine at the table, understanding the types of players you might have, running games for kids, engaging shy players, and insuring an inclusive environment for a wide variety of gamers.
All the essays in this section were enjoyable, but (and this will be a recurring theme) there is some overlap in a few of the essays. 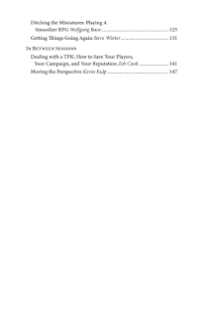 Planning the Game
The next section of the book deals with getting ready to run a campaign and making decisions about what to include in the game. This section includes essays from Dan Dillon, Michael E. Shae, Monica Valentinelli, James Jacobs, Brandon Hodge, Keith Baker, and Lillian Cohen-More.
Topics range from advice for new people running the game, tips for old hands at running the game, planning a campaign in stages, the inclusion of love interests, running a game on the fly, one-shot adventures, and winning player investment.
While all the essays are engaging and enjoyable to read, special mention should be given to Brandon Hodge’s essay and Monica Valentinelli’s essay, as they not only give good advice and are an enjoyable read, but are broken down into specific, actionable items.
The Game In Play
The next section of the book contains essays that deal with playing in sessions and dealing with what might come up on any given night. Authors include Bill Webb, Stefan Pokorny, Clinton J. Boomer, Steve Kenson, Ed Greenwood, Wolfgang Baur, and Steve Winter.
The topics covered include making rulings at the table, theatrical gaming, distractions at the table, improvising alternate ways to resolve adventures, dealing with small or large groups, playing without a grid, and pacing.
While enjoyable, this section is going to vary widely in usefulness because several of the essays in this section are strong opinion pieces. All well written, with good points, but often essays in this section will state things that certainly aren’t clearly agreed upon universally in RPG gaming circles.
In Between Sessions
The essays in this section pertain to recalibrating a campaign to change a direction, either to spur momentum or to react to a major event in the campaign. The authors for this section are Zeb Cook and Kevin Kulp, and they deal with TPKs and telling stories from alternate character perspectives.
I’m not sure that it’s ultimately clear that these essays aren’t part of the previous section, as we move from gathering players to planning a campaign, to playing the game and reacting to players at the table in actual sessions, but that’s a bit of a nit pic on my part.
Lost Guidance
It’s something that happens in any collection of essays, but several essays touch on similar topics. That doesn’t mean that the individual essays are of lower quality, or that the advice is bad, but it makes the product slightly less useful than a focused product that has multiple authors working together throughout. There is also a lot of advice that is very good, but it’s presented very conversationally. That means it’s not laid out in a manner that makes it clearly actionable, or that it’s not framed as a specific procedure that can be easily worked towards.
Finding the Path
I can’t point to a single essay that isn’t at least enjoyable to read, and just about every one has good advice for GMs, even if similar advice can be found elsewhere. Having best practices repeated in an enjoyable manner isn’t a bad thing at all. I tore through the book quickly, because it was fun to read. 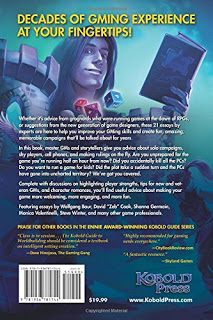 Are We There Yet?
I feel bad, because I’m probably harder on this book just because the gaming industry, now, has so many strong advice programs, columns, and books, that it’s hard to stand out as something more than enjoyable and worthwhile.
Because the book may have been a little better with more coordinated focus on topics, and more procedural focus on implementing new habits, it’s not among the absolute best gaming advice books I’ve read, and there are a few essays that are a bit adversarial about the author’s preferred style of game, which might limit the enjoyment of gamers that aren’t in agreement. However, all are well written, conversational, and fun, and you certainly won’t be wasting your time or money to pick up and read this book.
A solid book, and recommended, but not in the top tier of GM advice books ever published.
*** (out of five)