What Do I Know About Reviews? Predation (Cypher System)

The chapters in this section include Welcome to Grevakc, Laramidia, Appalachia, and Groups and Organizations.
Welcome to Grevakc goes into more detail on the timeline of the setting. It explains what the first generation was like, and the differences between life before and after time travel failed.
Laramidia details one of the two continental bodies in the setting, and takes up a lot of the pages in this section. Laramidia has the most settlements, locations, and plot hooks detailing the setting wide and local power groups.
Appalachia has fewer settlements–both land masses are largely untamed, but Appalachia is exceptionally wild, compared to the other continental mass.
Groups and Organizations goes into the setting wide power groups that lurk behind the scenes or jump up and scream “here we are!” There are people attempting to keep the old corporate structure going from before time travel broke, an organization looking to prove the literal existence of the Garden of Eden, and a group that wants the humans trapped in the past to die out in order to minimize their potential to destroy the timeline.
In addition to the implied plot hooks that the setting details provide, each region has a sidebar that explicitly spells out some adventure starters. There are simple character stats in various sidebars, and each region usually has an NPC or three for the PCs to interact with, who are given their own personalities and goals in relatively quick summaries.
In particular, there is a town that is revisited in the sample adventure that is a good starting point for new adventurers. It is both a crossroads and a place where the sport of dinosaur wrestling is very popular. The section on genetically modified spiders raised for their silk, and the environment created for them, is also especially memorable.
Part Four: Creatures and NPCs
This section is split into Using Creatures, and Creatures and NPCs.
The Using Creatures chapter details what creatures from the Cypher System rules are appropriate for use in the setting, and how to describe them to tailor them to the setting and its themes. There are some unique creature abilities, which can also be used for companions if the GM is okay with them. There is a two page spread that gives a size comparison of the various dinosaurs and other creatures in comparison to a human.
Creatures and NPCs gives the specific stats for creatures native to this setting, as well as giving some interesting background information on them, such as what place they might have in society or in their ecosystem. There is a note in this section that all of the dinosaur artwork shows modified versions of the creatures, since the “standard” version of various dinosaurs can usually be found fairly easily, but finding a picture of a stegosaurus genetically modified to throw lightning bolts is harder to find. I can’t fault their logic. 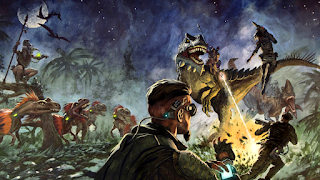 Part Five: GM’s Toolbox
This section contains the following chapters: Running Predation, Cyphers, Artifacts, and Remnants, and Promised Land.
Running Predation specifically discusses some of the potential issues with mentioning time travel in an RPG, and then discusses the “grey areas” of the setting. Specifically, while some aspects of the setting are presented as “fact,”, things like exactly why time travel stopped working are a mystery, and there isn’t an actual answer. This section has multiple potential answers for various setting mysteries and how those might influence campaign development.
There are also some adventure hooks not tied to a given region, and some setting specific example intrusions a GM might want to use.
Cyphers, Artifacts, and Remnants details some setting specific versions of those game items. I’m not sure that any of them jump out at me as especially radical departures from what we’ve seen in other Cypher System books, but the random tables are nice for funneling towards items that are appropriate to the setting.
Promised Land is the sample adventure in the book. It is a fairly straightforward introduction to the town mentioned back in the Larimidia section, which leads to a simple investigation, and an interaction with one of the organizations detailed in the Groups and Organizations chapter. It is a solid introduction to the setting that walks the PCs through some elements that they should get familiar with, but the adventure does one thing that really bugs me in starting adventures.
There are two NPCs that hire the starting NPCs to do a specific thing, but one of them “pays” by offering a discount on their goods. It’s an old RPG trope, which essentially reinforces that new characters equal “people that can’t be treated like competent adventurers yet.” Doing work for favors or discounts in a starting adventure is the RPG equivalent of adventurers doing a job “for exposure.”
Part Six: Back Matter
This section is divided up into References and Resources, Questions and Answers with Dino-Scientists, Kickstarter Playtesters and Contributors, Glossary, Character Sheets, Companion Sheets, and Index.
Most of these are useful, but serve a fairly obvious function. The Questions and Answers were especially entertaining to read.
Back to the Future
The setting could have been a by the numbers example of how to use flavor substitutions in a dinosaur setting, but it offers a lot more than that. The unique spin on the companion rules is a wonderful departure from just giving PCs a second set of stats to use in play. There is a great balance of setting facts, and open ended mysteries that the GM can determine on their own. The setting introduces lots of personality with elements like dino wrestling and how genetically engineered spiders are raised.
Temporal Paradox
If you read my Expanded Worlds review, you already read my thoughts on levels as they relate to companion characters or allies. In play, especially as they are described in this setting, they work fine, but assigning them levels, which is usually a GM side mechanic, and then making them player facing, feels like its mixing rules elements in a confusing way. The descriptors, foci, and cyphers introduced are good, but not really exciting enough to port to another setting. Then there is that minor quibble I had with the payment of young, up and coming adventurers.
Downloading some Cyphers to the DNA 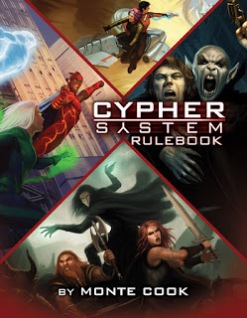 This is a great setting book for the Cypher System. The setting is imaginative and evocative, and the artwork reinforces everything that gets described. The way cyphers and companions are handled are wonderful, and make this setting unique compared to the rest of the line. If you love dinosaurs and over the top settings, this setting has so much to offer.
If you aren’t really into dinosaurs, or you want your dinosaur, post-apocalyptic, or time travel settings a bit more grounded, this may not be for you. The book mentions that you can run the setting with a more realistic, hard-science bent, but it still assumes cyborg dinosaurs with lasers on their fricking heads, so that advice only goes so far.
If you like dinosaurs, wild adventure settings, and the Cypher System, you definitely need to pick up this book. If you aren’t really into the Cypher System, you may still find a gonzo time-travel, dinosaur, post-apocalyptic (kind of) setting that you can use elsewhere. I don’t imagine too many people that would be disappointed in this purchase.
Recommended–If the product fits in your broad area of gaming interests, you are likely to be happy with this purchase.