What Do I Know About Reviews? Kobold Guide Mega-Review (World Building, Magic, Combat, Plots and Campaigns)

A few weeks ago, I wrote a review of the Kobold Guide to Gamemastering. In enjoyed it quite a bit, and didn’t regret the purchase, but gave it three stars. My logic was that while the book provided valuable, entertaining content, other GM advice books have come out that have a more unified approach with more actionable practices.

While I’ll definitely stand by that assessment, I enjoyed the book enough that I ended up, over the course of a few weeks (and a few strategically placed sales) to pick up several more of the Kobold Guides. Since I have digested these in a relatively short period of time, I’m going to do an experiement here on the blog. I’m going to do a mass review of several other books in the Kobold Guide line.

These books all have attractive full color art on the cover, minimal black and white interior art, and clear internal formatting for each section and chapter. The books are digest sized soft cover offerings. They look nice and clean, and sit on a shelf well with some of the later Engine Publishing books, for example.

All of these books are available as PDFs or from various epublication sites. Unfortunately there aren’t any bundles that include both the PDF and the ebook version of the guide. Physical copies are also available (as of the time of writing this, I’ve only got the Kobold Guide to Gamemastering in physical form).

In addition to PDF, ebook, and physical, the Kobold Guide to World Building is available as an audiobook. This was a nice surprise, and I hope that the foray into audiobooks does well enough for Kobold Press that they release more of their books in this manner.

The Kobold Guide to World Building

This is a really big picture book. It addresses how to build a world from scratch, what your philosophy on building that world should be, and why you might not want to details some elements of the world. Some essays also touch on the needs of a fictional world versus the needs of a game world. There are also a few that address pantheons and religion.

While some game systems might have discussions on world building, there are a few essays that go in directions that I haven’t seen discussed in depth. Additionally, while the focus is on rolelaying games, there is some discussion on background settings for other product lines, such as minis games, video games, and novels as well. Its a broad treatment, and very entertaining.

There is less overlap on the topics covered than in some of the essays in the Kobold Guide to Gamemastering, and where there are similar topics (such as religion) the authors go in very different directions in what they cover. Don’t expect detailed recaps or summaries, or even rigorous procedures for creating a world, but there is a lot to like on a wide variety of topics.

The Kobold Guide to Magic 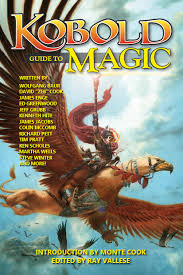 The Kobold Guide to Magic is a discussion on magic in roleplaying settings. It isn’t about any one setting or game system, so it’s a zoomed out discourse on how you might want magic to feel in a setting, what kind of impact it should have, and how much you want to quantify the rules of magic in your game. While I have seen discussions of magic in game settings in the past, I haven’t seen many books fully dedicated to the topic, and not married to one particular magical tone or theme. For example, the book, as a whole, doesn’t advocate for magic as technology, low magic, or high magic, but discusses all of those approaches.

There are essays on gender based magic, culturally influenced magic, secret societies, and how magic use might be punished or constrained in a setting. Like all of the Kobold Guides, these are a series of essays, and while they all touch on the same topic, they aren’t coordinated, and generally don’t have a specific plan for implementation. That said, magic is a broad and interesting topic, and the authors assembled do a good job discussing it in a way that makes for lively reading. The advice is broad enough to be useful in many different game systems.

The Kobold Guide to Combat 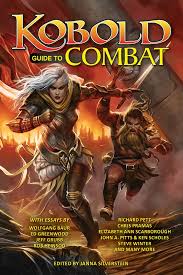 Like the Kobold Guide to Gamemastering, this book is divided up into smaller topics, under the main topic of combat in roleplaying games. Those sub-categories are The Big Picture, Environments, Arm Yourself!, The Right Character for the Job, and One More Thing. Under those categories, we get essays on why combat is prevalent in storytelling, how to make combat more interesting by describing elements like weather and terrain, discussions on weapons and equipment in combat, and the roles that specialized characters play in a combat situation.

I definitely enjoyed this volume. None of the essays were fell flat, but combat, tactics, and battlefield details are definitely topics that have been touched on in other sources in the past. A few of the essays veer a bit more into discussing mechanics of specific games than in the other Kobold Guides, specifically some digressions into Pathfinder and 13th Age mechanics. It’s probably unavoidable when essays go into tactics, but there is a bit more discussion of mechanizing more aspects of the game to reflect certain kinds of combat situations.

One essays that especially stood out to me was Elizabeth Ann Scarborough’s discussion of healers in combat and the mindset of people that have to heal in the face of warfare.

The Kobold Guide to Plots and Campaigns

This book is about designing campaigns, story arcs, and ongoing game elements. Much like the Kobold Guide to Gamemastering, this one has a bit more of an uphill battle, since this topic has been touched upon by a lot of books, articles, and podcasts over the years. Topics in this book include creating unified themes in a campaign, using published adventures, running evil campaigns, giving weight to action scenes, designing NPCs and villains, complex plots, story hooks, letting go of expectations as a GM, creating generational stories, and using cliffhangers.

This is an enjoyable book to read. All of the essays are engaging, and none of them are boring. As mentioned at the top of this mini-review, however, very little of this is brand new material that hasn’t been discussed a lot in the past. Reading all of these in a relatively short period of time shows some overlap of ideas and suggestions between this book and the Kobold Guide to Gamemastering and even the Kobold Guide to Combat. Reading good advice that is well written is never a bad thing, but if it’s similar to what you have read before, it does make it less of a “must have” on the list of gaming products to buy and consume.

One particular stand out in all of this was Zeb Cook’s article, and follow up adventure. The article discusses creating a very loose structure for an adventure, and filling in details based on some questions asked of the players. The final essay took what Cook detailed in the previous essay and showed what that adventure would look like. I loved this, and I wish a few more of the articles had a more methodical follow up showing the practices outlined in the previous article. A few more of these “example” essays to build on the previous advice, and I would have easily bumped this up in my ratings.

The Big Kobold in the Room

I am old. I had a subscription to Dragon Magazine from almost the time I started playing my first session of D&D. My favorite articles were often the “philosophical” discussions of running a game, rather than specific mechanical articles.

This has a number of effects on me. I remember a lot of content similar to what is in the Kobold Guides, and that may jade my opinion on what is “new” or not. On the other hand, it certainly draws me to buy and read more content that is in line with that material from the past.

The Dragon Magazine articles of this nature were not nearly as consistent in quality or engagement as the Kobold Guides. I may flounder a bit on whether I think an individual volume is “good” or “very good,” but the line, as a whole, is the kind of thing I want to see continue for a long time into the future. Ironically, the longer the line continues, the more it will probably cover ground I’ve seen covered in the past.

I’m saying most of this as a general warning about my bias. I can’t read any GMing advice as someone new to the hobby. My perspective is hard-wired into me, no matter how much I try to remove myself from my limited perspective.

The overall quality of this line can’t really be questioned. My opinions just show what order I would prioritize picking them up and consuming them, when measured against one another, and other game philosophy/advice material out there.