Thoughts on Down with D&D Episode 111

The most recent Down with D&D Episode, Episode #111, discussed monsters as player characters. Chris and Shawn do their usual good job of addressing the topic, but its pretty huge, and I think they may have even identified a sub-topic within the main topic of their discussion.

Part of the discussion revolved around why you would play a monstrous race as a PC. They, rightly in my opinion, conclude that you need to strike a balance between that non-standard choice having meaning, and making the character unplayable.

I have definitely seen both sides in various campaigns, including organized play. In organized play, some GMs resent having new rules open to the game that they cannot change, so they tend to just ignore what they wish they didn’t have to deal with. I saw this in Pathfinder Society, and maybe just a little in Adventurers League.

In this case, you end up with a lizard folk or a bugbear standing in a city, looking for work, and being treated exactly like a halfling, human, or dwarf would be. To the GM that doesn’t want to deal with them, they are a “generic PC that has a specific set of stats.” It doesn’t impact the game, and nobody gets much out of the experience.

On the other hand, I’ve also seen GMs that preemptively threaten players that they will kill off any “unnatural” species that show up at their tables. I’ve not seen this in 5th edition AL, but I’ve heard about it in previous editions, especially when radical new options were allowed (for example, when 4th edition organized play allowed drow as a PC option in standard campaigns).

I completely understand tailoring an experience, collaboratively, for a home game. When you are in an organize play situation, you know the rule as well as the players. If you can’t GM for a table with goblins or drow, if those are legal options, you need to realize that they aren’t the problem at that table, you are.

Chris and Shawn made an excellent point about inspiration during this discussion. If you don’t want to make the game unplayable, but you want to make sure that you are making a player’s choice noteworthy, there is already built in roleplaying mechanisms that allows you to do things like saying “the townsfolk clearly don’t trust you–make the persuasion check with disadvantage, and after the check, I’ll give you inspiration.” Don’t radically alter the scenario, use the tools built into the system. 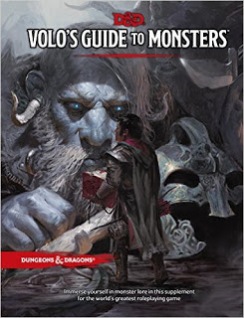 I think  they also wandered a bit into another sub-topic, as playing an orc, a goblin, or a kobold has roleplaying ramifications, but those species don’t introduce radically different rules into the game.

Playing creatures that can fly, or shapeshift, or that are definitely not humanoid, seem to be worth a whole other discussion. That said, there is a lot less mechanical support for those creatures in the current rules.

I think you can argue that in a setting that has orcs, eventually an orc may end up working with an adventuring party, and the rules should be able to accommodate that. I’m not sure that the game, as structured, should be pushed in the direction of allowing for dragon or elemental PCs. Those seem to be wholly alien experiences to the average person in the setting, and probably better modeled with RPGs that don’t have the same base assumptions as D&D.

Back in My Day

Also, I’m putting on my old man hat. Shawn mentioned previous editions and when playing monsters came into the game. Reverse Dungeon was a big deal, of course, but there were a few steps along the way–Orcs of Thar for BECMI had rules for playing various humanoids in that edition of D&D, and Dragon Magazine had a few articles detailing things like the Lizardman Erudite, which was essentially a lizardfolk druid. The Complete Book of Humanoids in 2nd Edition also had a lot of “monstrous” races as well.

Settings a Monster Can Call Home

As far as settings that assume some monster races are prevalent–a few older Forgotten Realms resources mentioned that seeing orcs or goblins in places like Waterdeep working as mercenaries wasn’t that uncommon, and that people didn’t get too nervous about them unless they came to the city as a large group. Ironically, given the lore in 5th edition, gnolls were more civilized in Thay and worked as police in the cities there. Zhentil Keep also had a fairly large force of orc mercenaries, and the Zhents also were specifically oppressing a group of good aligned orcs known as the Odonti. There was even a plot hook for Waterdeep that involved a hill giant prince on a diplomatic mission to the city.

Dragonlance introduced Minotaurs as one of the “standard” races in the setting all the way back in 1st edition, and in 2nd edition, when the Taladas campaign expansion came out, it introduced goblins, ogres, and lizardfolk as PC races. It’s almost a cheat to mention Dark Sun, because it intentionally subverts so many D&D tropes, but there were definitely some more “monstrous” PC races in that setting, from the dray to the thri-kreen.

Despite my assertion that D&D might not be the best venue for exploring more exotic monstrous species, 2nd edition also saw the Council of Wyrms setting, which involved letting the PCs play as dragons.

Eberron is the flag bearer for a setting in 3rd edition that was less likely to assume that “monsters” were monstrous, but the one and done Ghostwalk supplement introduced characters playing as the spirits of their own dead PCs.

Back to the Cast

I enjoyed Chris and Shawn’s discussion, but I’d be really interested to see them follow up with some thoughts on the truly monstrous monster races, and how they differ from creatures like orcs, goblins, or even lizard folk.

Additionally, they touched on the new XP system that was released as an optional playtest set of rules by Wizards of the Coast in their Unearthed Arcana column this month, and I’m really looking forward to some more in-depth discussion on that topic.

If you enjoy D&D, and you listen to podcasts, this continues to be a show that should be on your podcatcher list.