Tales of Halloween Past

I was about to fall asleep, when, for some unknown reason I remembered a completely random moment from Halloween of 1984. I was but a lad of 10 years at that point in time, in 5th grade, attending St. John’s.

If you’ve followed along on my various self-indulgent ruminations here on the blog and elsewhere, you may have seen me point out that I started playing D&D in 1985. That is true. However, I stole the D&D Basic set that my sister received for Christmas in the summer of 1984, after seeing the poor thing sit in a drawer for six months.

My favorite part of the book was the section with the monsters. The rules weren’t quite making much sense, but the description of the monsters and what they could do was firing my imagination.

At school, for Halloween, we were having a contest to determine who could write the scariest story. The irony in this is that in just two years, we would have one of the prominent families in town start a crusade against Halloween because their youngest was scared by something spooky, and all of our Halloween celebrations were turned into Fall Fests where we could only dress up as biblical characters. But that wasn’t the case in 1984.

I’ll be honest, I can’t remember most of the stories that my classmates wrote. Fifth graders apparently aren’t the best horror writers. There are only two stories I remember from that year. One story was written by my friend Mike, who spun a yarn about a haunted house that culminated in a washing machine that started to churn out blood.

But my story? I drew my inspiration from the monster section of the D&D Basic set.

I can’t remember all of the nuances of the story.

Let me rephrase that. I was unlikely to have had any nuances in my story, but I can’t remember most of the details, except the following.

The story involved an adventuring party traveling into an ancient cave system. Eventually they stumble upon a mound of bones, which they assume are the remains of the dinner eaten by some huge monster that lives in this section of the dungeon. Slowly, the bones start to pull themselves together into an army of skeletons.

Outnumbered by the bones of the dead, our intrepid adventurers ran into another denizen of the dungeon. A seven foot spider called a tarantella skitters out and bites one of the adventurers, and then retreats back down the corridor. The first adventurer feels the poison, which causes him to start dancing. The rest of the adventurers see this, and are forced to dance as well, until they all collapse on the floor of the dungeon, helpless.

At that point, before the poor spider could come out and claim its meal, the host of skeletons catch up with the exhausted adventurers. Unable to run, or even to move, they could only watch in terror as the living dead start to rip them to pieces, too tired to even scream out in pain. 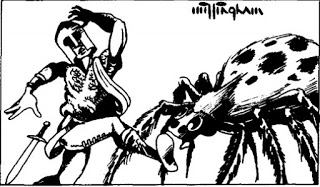 Yup. That’s what I wrote about. I TPK’d a party before I ever ran a game. In case you haven’t run into it before, the tarantella isn’t a misspelling of tarantula. The tarantella is a monster from the D&D Basic set whose poison causes its victim to dance a dance that is so compelling, everyone watching has to join in, until they collapse from exhaustion. That was such a compelling image to me, I had to do something with it.

Mike won the contest. Despite explaining that the tarantella was a unique monster, and not a misspelling of tarantula, I got marked off a few points for spelling. It was disappointing. That said, I got to read the story in front of the whole class, so that almost makes up for my poor, misguided teacher, who didn’t understand a masterwork of horror when she heard it.

I have absolutely zero idea why that story popped into my head as I was attempting to fall asleep. I know I couldn’t quite drift off without recounting it. Although, now that I think about it, I’m seeing a lot of eight legged shadows in the corner of the room.