Radioactive Square Pegs in Round Holes–D&D, Inspiration, and Context (The Problem with Drow)

First off, the concept of dark elves probably comes at least partially from Norse mythology, and the term drow probably derives from the Scottish term trow–but actual details about dark elves or trow from these sources are thin, and in both of these sources, elves, dwarves, and trolls are all things that could kind of be the same thing.

Essentially, D&D dark elves are applying the idea of “dark elves” to the hybrid elf/sidhe D&D elf that was derived from the amalgamation of Morecock, Anderson, and Tolkien’s concepts. Apparently, that gets a little volatile.

For years, the idea was that the dark elves were the bad ones, driven underground by the surface elves, then cursed by Corellon because they were evil. None of this really applies to Eberron, and I can’t really speak to their history in that setting. Depending on the particular Greyhawk source, Corellon may not be mentioned as specifically cursing the elves driven into the Underdark. Much of what follows comes from Forgotten Realms lore, which is where most of the works published on dark elves currently originate.

I mean, that’s just bad on its surface. I get the feeling that this wasn’t done with bad intentions, but you know, the road to Hell and all. Dark elves + literal interpretations = black skin. Backstory flavored to support.

The contributing factor ends up being that in the Realms, they tried to “fix” this by saying that the Illythiiri, the elves that became the dark elves, were already dark-skinned to begin with. so Corellon didn’t so much make them dark-skinned, as make them even more dark-skinned.

This means Corellon didn’t make them dark-skinned, but the bad guys were already dark-skinned, and Corellon made them more so as a punishment. Oh, wow, that went off the tracks.

Final spin on skin color and elves–in the Realms, moon elves have super pale skin with blue highlights, gold elves have golden skin, and wood elves, or copper elves, have essentially darker skin with copper highlights. However you may interpret this, the feeling was that elves were intended to have more fantastical appearances than any art ever depicted them as having, at least in the Realms.

It wasn’t really until the 5th edition Player’s Handbook that we got to see moon elves that looked how they were described. The old Forgotten Realms DC comics portrayed Vartan with gold skin, but our first look at Drizzt on a book cover made him appear to have dark brown skin, instead of literal black skin, which made him appear to be black, in terms of human ethnicity.

Problem #2–There are “some” good ones

People pointed towards Drizzt as being the saving grace of drow and how they are portrayed in D&D. The problem is, the narrative is that “most” of them are bad, but there is at least one “good one,” who happens to act like the surface cultures that banished them in the first place.

That doesn’t really make the narrative any better.

While it was still a problem of numbers, when Eilistraee was introduced into the Realms, there were then multiple small groups of dark elves that were not evil in the Realms. They had communities dotted here and there, in Undermountain and the High Forest, for example.

Unfortunately, a lot of gamers didn’t like the idea of a significant portion of the drow population being potentially good, because it “ruined” them as villains. If they might turn good, after all, my character might feel bad about killing them. Guilt-free adventuring is best!

By the end of 3rd edition, Eilistraee was killed off. Oddly, when 4th edition appeared, the drow were a playable race right out of the gate, and not assumed to be evil. That’s a mixed signal to be sending.

It might not be a bad thing to have drow society being both evil and a matriarchy, if most D&D settings had strongly showcased any kind of matriarchy that wasn’t evil. There are a few societies scattered around where there are female leaders, but very few established D&D matriarchies, outside of the drow.

While elves in the Realms, for example, have a queen as their primary monarch, they still aren’t portrayed as being a matriarchy. In fact, the current queen followed the reign of a well-regarded king of elves. A matriarchy, in dark elves, looks like another “negative image” of elves, which makes it look like a matriarchy is a perversion of what “should” be in elf society.

The Eilistraee situation compounds this problem. While Eilistraee’s followers might have shown that matriarchal dark elves didn’t need to be a perverse, evil development for a society, the problem is that once we see a “working” model of their society in the novels, beginning in the War of the Spider-Queen novels, these “good” dark elves still tend to use males as pawns to be sacrificed. In other words, you can’t have a matriarchy where the females make good decisions and care about everyone in the society. They still must have a streak of misandry in their actions.

In Elaine Cunningham’s Evermeet: Island of Elves novel, the idea is subtly introduced that drow are partially demonic, because the leader of the Illythiiri and Lolth herself, who became a demon lord when cast out of the elven pantheon, may have had children. The line wasn’t drawn that demonic blood damned them, but it was used to explain drow special magical abilities and their affinity for being able to summon and control fiends.

Years later, we got the Lady Penitent series. And things got more complicated, by trying to make them less complicated. Turns out, Lolth’s blood isn’t what gave most dark elves their demonic traits, it was a balor friend of hers that she used to help her corrupted all the banished dark elves.

Eilistraee is also killed in the series, so we can wipe the good drow matriarchies off the books.

Finally, the story explains that some drow in the modern era are born without demonic taint, so they can be “saved,” but the ones with demonic taint still on their souls are totally born evil and unredeemable, so have fun killing them and collecting your XP. Guess which camp everyone’s favorite lavender-eyed protagonist was born into? I guess his moral struggles aren’t really a sign of good character, just a random accident of birth.

I feel as if this was being set up, as the books appeared at the end of the 3.5 era of the Realms, to explain that PC dark elves were the ones “not born evil,” and NPC drow could remain 100% “always evil.” Thankfully, this was never explicitly stated in any of the 4th edition material, and very little mention is made of the Lady Penitent series in current Realms material.

Some of the issues in all of this come from the conflicting desire of gamers. TSR wanted to create a narrative so that there could be good dark elves, and not just the “one in a million” narrative of Drizzt. They had Ed Greenwood create Eilistraee (see Drow of the Underdark, a 2nd edition Advanced Dungeons and Dragons sourcebook), a goddess whose followers could help account for a population of good drow in the setting.

R.A. Salvatore, having not created Eilistraee and strangely writing a much more agnostic version of the setting than anyone else working in the shared world, ignores this development. The “one good one” narrative continued to be the primary narrative.

I’m not sure I can handle the cognitive load of parsing all the ramifications of this, but in Salvatore’s more agnostic Realms, this means that drow evil isn’t really influenced by an outside entity, so much as the drow are so uniformly and collectively evil that they have created a mass delusion that reinforces their notion of the universe and has a degree of supernatural power because of that notion.

Gamers that don’t particularly like Drizzt start to see any good drow as an extension of that character’s popularity, and you have a massive divide between D&D fans that like drow as adversaries, and R.A. Salvatore fans that like the “one good one” narrative, but when playing D&D, want to be “the other good one.”

So WOTC inherits the conflicting fan drives of “Drizzt is great” and “Drow should always be villains.” The middle ground, that there may be some drow societies that aren’t evil, but that some, like Menzoberranzan, certainly are, is largely unexplored, and eventually scrapped.

Mix in the ancillary problems, like D&D art not portraying even human ethnic groups the way they 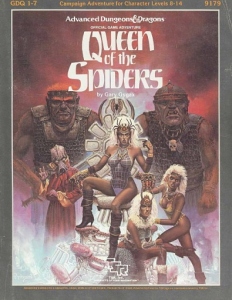 are described in the books, and the image that casual or new fans have in their heads begins to conflict with the image that some of the creators may have intended. This is perhaps best underscored by Ed Greenwood’s accounts of meeting with Hollywood executives about live-action Realms prospects, and being met with the executives understanding that drow culture is “about hot black women who are all dominatrixes.” (Dig through the “So Sayeth Ed” archive at Candlekeep for the account)

The fifth edition D&D Player’s Handbook does a lot of good, inclusive things. I loved that the human ethnic groups came across as varied, instead of the previous perception of “white people, Chultans, and people from Kara-Tur.” I was excited to see a gold dwarf female in Xanathar’s guide with brown skin, as they have always been described.

But drow–drow seem to still be caught in a complicated web of problematic tropes and historical long shadows.