Last year, I posted some of my gaming wishes for 2017. This year has been–interesting–in many ways, but when it comes to gaming, this was actually a pretty good year for me. I thought it only fair to post an update to see how well I managed to follow up on my gaming wishes.

Get Back on Track with My Read and Reviews
If there is one thing I think I managed to do this year, it’s this one.  I had a dry spell last year, towards the end of the year, where it was difficult to get any RPG reading done, let along blogging a review into existence.
While I’m still having a bit of a time crunch this time around, I’ll still have at least one review in December, and on top of that, I’ve been reviewing both on this page, and on the super prestigious Gnome Stew. I never would have seen that one coming if you had told me about it last year.
First things first–thank you so much to Chris Sniezak for paying attention to my reviews and bringing them up to John Arcadian, and to John, for giving me a shot at Gnome Stew. I am humbled and very thankful to both, and to everyone that has given my reviews a read over the past year.
But, for the purposes of this post, I guess I can say that I got back on track.  So far, we’re 1/1 on the gaming wishes.
Adventure in Middle-Earth 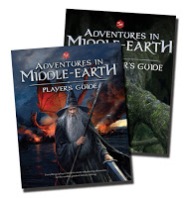 I have almost all the PDFs for The One Ring,and almost all the PDFs and the physical copies of the Adventures in Middle-earth product line. I really like Tolkien, overly long descriptions and all. Most of my regular gaming group does not.
To their credit, they were lined up to play in an Adventures in Middle-earth game that I was going to start, but there wasn’t a lot of enthusiasm, and, as it turned out, there wasn’t much time. So, this one didn’t happen.
I’ll get back to this one later, but given how I like to run things online, and the fact that running online makes me nervous that I’ll wind up with Tolkien super fans that will see me for the fraud that I am, this isn’t going to happen locally, and it’s probably not going to happen online. This wasn’t just this year’s failure, but probably a “never going to happen” item in the books. So, the gaming wishes from last year now stand at 1/2.
Run an Age of Rebellion Campaign Again–This Time Successfully

Last time I ran an Age of Rebellion game, I inherited it from a friend. There were some plots in motion, including a double agent among the PCs, and it derailed what I was trying to do. It felt unsatisfactory. Given that I had run a few solid “season length” Edge of the Empire campaigns, as well as a 9-session arc of Force and Destiny that seemed to go well, I really wanted to have a solid Age of Rebellion game going on.
I tried to get this one going with my online D&D friends, but I did a terrible job of trying to use Friends Like These. It was very much my fault for not tailoring the adventure to the group, and not being adaptable enough. I also realized that running every Thursday was getting trickier. I thought this one was going in the “not going to happen bin” as well.
Then I managed to schedule a session zero of a new Age of Rebellion game, and play through our first episode, which involved having the future Rebels survive an invasion from an Imperial director and her star destroyer. This gave them some personal stakes, and put a “face” on the Empire for the group. I know the campaign isn’t “over” yet, but I’m still going to call this one a win.
2/3
Experience the Full Shadow of the Demon Lord 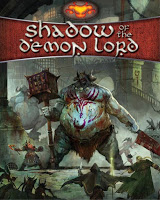 You can watch this one online, on my You Tube channel (more on that later), but this totally happened. I had a great group of players, and despite things getting a little wonky and weird in places, I think it came together well. I greatly enjoyed the experience, and we played through from 0 to 10th level.
3/4
Visit Dungeon World Again 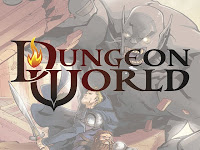 It wasn’t a long visit, but the one slot where I didn’t run a Powered by the Apocalypse game last year for my local convention, Winter War, I played in a Dungeon World game. Matt did a great job of running that game, and we pretty much scratch built the setting, and he responded with a plot. It was a lot of fun, and it was great to be on the other side of the table, playing in one of these games for once, instead of running it.
4/5
Accelerate a Dresden Game

I’ve been wanting to run Dresden Acceleratedever since I got the “almost finished” PDF, before it had final art. I finally managed to do so this year. Currently, the Dresden game is a monthly game on the second Saturday of the month, and it’s been a lot of fun. It was one of my one-shot games that managed to turn into full campaigns after our trial run.
5/6
On the Other Hand, Those One-Shot Games . . . 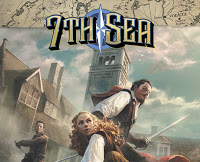 I ran one shots of 7th Sea, Dresden Accelerated, and Predation, and almost all of those went from single games, to multiple games, to ongoing campaigns. 7th Sea and Dresden are still ongoing, and should get at least a proper 9-12 session story arc before they wrap up.
Now, I’m not sure it counts, me running games from my backlog as one shots, if I end up running them as actual campaigns, but I totally started them just as one shots, and they were all games and/or settings I hadn’t run before, so I’m counting them.
6/7
Successfully Complete Storm King’s Thunder 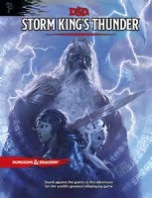 Running Storm King’s Thunder was interesting. I had a group of fun players, we played for about 2-3 hours at a time, and we played on a weekly basis. It’s been a while since I ran a weekly game, and it’s been a while since I ran so many sessions in one campaign with the same characters (36 sessions total).
I blogged about the campaign elsewhere on the blog this year, but this one was a definite one for the win column, even if I wish I had stuck the landing a bit better than I did (but I’d rather finish okay instead of strong, than not finish at all).
7/8
Get Some Cypher Gaming Going 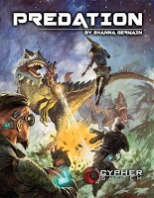 I have a ton of Cypher System material, and very little playtime at an actual table. While the core mechanic isn’t difficult to grasp, I was a little concerned about unleashing the changing foci of The Strange on my regular Thursday group, so I scrapped those plans.
I did eventually get a chance to run Predation. It didn’t turn into a full campaign, but the setting was a big hit, and we had a lot of fun with it.
8/9
Explore Some Venues
When I set this goal of exploring new venues to run games, my “go to” venues were running at the local convention, running Google Hangout sessions, or running at the FLGS. It wasn’t long after I posted my gaming wishes that we found out that the FLGS was shutting down.
Thankfully, a new FLGS opened in the spring, and I’ve been running games there. It’s in the mall, and often, we have a table that is outside of the store. It’s interesting to be in a wide-open space with shoppers wandering by, but sometimes it’s more comfortable than being in a busy, loud game store with other events going on.

Originally, my thought on this was to look at libraries or student unions to run games. I still want to see some new spaces I haven’t tried yet, and I want to get some outdoor gaming in at some park or another when the weather gets better, but for now, I think I can count this one as complete, since I’ve never actually run a game outside of a store, in a mall before.
10/11
Get Some More YouTube Video Sessions Going
I managed to do this one as well! I reorganized my old Marvel Heroic Videos (I’m still lost when it comes to editing, so I apologize for anyone attempting to watch), and I recruited for a Shadow of the Demon Lord game.
I got to play with two old friends, and I met three new gamers, and forged some new online friendships. The game was good (I made some mistakes, and learned from the experience), but what’s even better is that I have new gamers in my circle of contacts online who are great people.
11/12
Hey, that’s almost a 92% completion rate! Unless I manage to run a The One Ring or Adventures in Middle-earth session for my in-laws in the next two weeks.  Hm . . .