Looking Forward To A City Campaign 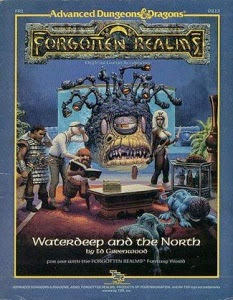 Since my upcoming Midgard game is going to be city focused, and I had some thoughts on why I went that direction, and what I’m hoping it brings to the table.
Fantasy Cities–A Love Story
The thing that I fell in love with most in the Forgotten Realms early on was Waterdeep. As a youngster, I had never really been exposed to a fantasy city that was an adventuring area all on its own. Between Waterdeep and the North, Elaine Cunningham’s novels, Volo’s Guide to Waterdeep, and the City of Splendors boxed set, I felt like I knew that city. The wards had a different feel to them, I knew how the guilds worked. I understood how the city could both have and not have a thieves’ guild.

I mention Waterdeep first, because I was exposed to it first by getting into D&D, but in high school, I also fell for Lankhmar. Because I wanted to be a “proper” D&D player, I tried to start reading the Appendix N books, but I had a hard time getting into them. I could see where some of them influenced D&D, but they weren’t where my head was at in that phase of life.

Those two experiences informed what I wanted out of fantasy cities from that point on. If I couldn’t see a personality in the city, and I couldn’t see the different wards and districts and how they made up the tone of the city, I didn’t really see the point of it. Heck, one of the reasons I wasn’t as thrilled with Neverwinter Nights as a game was that they used the city ward names, but it didn’t “feel” the way the city felt to me when I read Volo’s Guide to the North.
What Is It About Cities in Fantasy?
There are some things I’m hoping to pull from these fantasy tropes to use in my campaign. Despite having different personalities and different wards, there are some common themes that come up in the best fantasy cities that I’m hoping to tap into.
●     Consistent home base
●     Distinct districts with personalities
●     Subtle, weird clues about sinister things that can get lost in a busy city
●     Lots of varied contacts that can be the “face” of various elements of the city
I’ve talked about this with people recently online, and I actually like adventuring parties meeting in a tavern or an inn. I think that trope has taken on some negative connotations because it has become too much of a shorthand for starting an adventure cold. What I like about a good inn or tavern in a fantasy setting is that it has personality of its own. It has certain people that go there. It has a specific staff. It has its own history and quirks. That’s why I like to find an inn or tavern with something I can latch onto for a home base that the PCs can use.
I like districts to be distinct and to have their own personalities and themes because then the PCs can wander into another part of the city, and still be in the city, but feel like they have gone somewhere. They can feel like they have their comfort zone in their home base, in their home district, and walk a few streets over and be out of their element. Multiple city districts show the things that are important to a city, as well. Lankhmar has a whole “forbidden zone” district, as well as a district devoted to decadent pursuits. Waterdeep has a whole ward that is essentially a graveyard/park, and it conveys something about the city that this district isn’t really seen as a creepy, dangerous place overall.
In a small town, if outsiders show up and start doing business, it is a lot easier to figure out that they might be part of a thieves’ guild or an evil trading coaster. If practitioners of a new religion show up, it is a lot easier to pick up on the idea that they might be evil cultists. In a city, is way more likely that new merchants roll into town and that new sects will become popular, so it becomes easier to both hint and hide strange goings on. If the new, popular cult turns out to be evil, it feels like a story thread paid off in a city, but if it just fades away, it seems like business as usual.
There is also something about a city that makes the “face” of something more emblematic. Arnwright the Smith in a small town is Arnwright, and he’s smith. Arnwright the Younger, Guild Bonded Smith in Good Standing, conveys something about the setting, in addition to being a “face” that the PCs can interact with. By tying him to an organization, it conveys the idea that it’s hard to survive and get noticed in a city without having ties to something bigger.

Looking at Zobeck
Looking at Zobeck in the Midgard setting, it ticks off a lot of these boxes very easily.
●     Zobeck has interesting local history (overthrowing the Stross family, for example)
●     Zobeck has distinct city districts (it has a Kobold Ghetto for goodness sakes!)
●     Zobeck has distinctive guilds and organizations
●     Zobeck has its own niche (gears!) that set it apart from other cities
●     Zobeck has colorful local establishments that can serve as an adventuring party’s home base
Because I don’t want to tip my hand too early about what I want to throw at my players while they are in Zobeck, I’m not going to go too far into the threats I have planned, but the city has a ton of built in hooks that I’m looking forward to using.
The base of operations for the adventures, at least to start, is the Silk Scabbard, a tavern/brothel/gambling den/fighting pit that sits and the edge of a couple of districts and attracts a wide range of people from different social strata.
This allows me to introduce a variety of faces from rich families to working guildsmen to visiting dignitaries. I can have “regular” staff that interacts with the group. If the PCs ever want to just blow off steam, they can gamble or take a turn in the fighting pit, and both are easy to adjudicate.
Beyond the more standard fantasy city tropes, Zobeck has the Kobold Ghetto, which is only open to strangers at night, and isn’t really built for larger races. It has a ton of competing Kobold Kings of various gangs for the group to interact with. Additionally, there is a university district with tons of scholars and studious mages milling about where a lot of supernatural mischief can be cut loose or researched.
Being a city literally in the middle of the campaign setting map, there is ample opportunity for the PCs to run into people from other cultures around the setting, and possibly pick up a job or two traveling to those places and doing a thing before they come home. Even if they never leave, the rest of the campaign setting can “live” through visiting merchants and nobles brining news of what’s going on outside of the city walls.
What If They Want To Leave?
Eventually, encountering the rest of the world, or traveling abroad to do exciting and profitable things, maybe the PCs will want to leave Zobeck behind. I’m not going to worry about it too much until the time comes. I’m fairly certain if they spend most of their 1-5 level adventures viewing the setting through the lens of the city, then the city has served its purpose.