What Do I Know About (Short) Reviews? Chultan Death Curse: Revised! 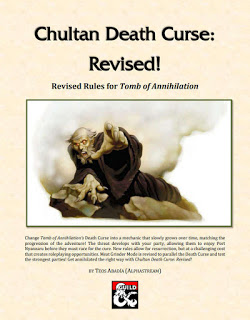 I haven’t played as much Adventurer’s League this season as I have in some past seasons. Over the last year, I’ve been busier running Storm King’s Thunder online and running a Midgard campaign. I only managed to briefly play my Triton cleric Orin. But that doesn’t mean I haven’t gotten to hear all about the Death Curse.

If you haven’t looked at Tomb of Annihilation, the Death Curse is a special set of circumstances tied to the plot of the adventure which afflicts characters that have died and have been brought back to life, and it is brutal. Various NPCs, and potentially PCs, are afflicted with this, and the Death Curse keeps people from getting brought back to life, eventually kills people that are afflicted as their maximum hit points wane, and there is even a chance that a soul is permanently destroyed, so that even if the Death Curse is removed, that particular character ceases to exist.

In addition to the Death Curse, there is an optional rule for the Tomb of Annihilation adventure called Mead Grinder Mode, which makes it harder for characters to make their death saves, which means death is definitely looming.

A Cure For What Ails You

While it won’t save any Adventurer’s League characters, if you are planning on playing through the Tomb of Annihilation in a non-organized play environment, here is what you can find in this product.

What Is This Mysterious Thing?

The product is seven pages long and only available in PDF format. It has a simple layout with some well-placed art assets, and it costs $1.98, so it is definitely affordable.

What Is In This Septemvirate of Pages?

The product details a new version of the Death Curse, and instead of hitting an afflicted character all at once, the worst aspects of the Death Curse can scale at various times in the adventure, triggered either by plot or level progression.

In addition to the standard progression, certain action taken by the characters may trigger the Death Curse to move up to the next level. So the overall curse for everyone may be at stage 2, but a given character may be suffering the effects of stage 4 due to events in the campaign and actions taken by the party.

I could explain a bit more, but I don’t want to give away any of the mechanics. Suffice to say, with the effects spread out, the Death Curse is less punitive in the early stages of the adventure, allowing the PCs more time to explore and enjoy the content, but certain developments may still make solving the Death Curse much more important.

There is also an alternate version of Meat Grinder Mode, which also scales to different stages, instead of just imposing a penalty on death saves.

Anatomy of a Revised Curse

I am a sucker for consistent rule implementation, so I really like that the Death Curse and Meat Grinder Mode work in a manner consistent with levels of exhaustion. While it is still a new rule implemented for a campaign, it feels like it fits, because it is structured in a familiar manner.

Additionally, this is a good document to read through to get ideas for other similar progressive conditions that you may want to implement in a campaign. Even without modification, the revised Death Curse could be something that hangs over the PCs until the appease a god of death in one campaign, and Meat Grinder Mode could be a curse of ill-luck thrown over the party by a trickster god.

At the price, if you have even a passing interest in D&D 5th edition, even if you aren’t playing Tomb of Annihilation, its a neat set of rules to check out.

Like Loading...
tagged with D&D 5th Edition, Dungeon Masters Guild, Tomb of Annihilation, What Do I Know About Reviews