Posted on 06/10/2018 by Jared Rascher Leave a comment
I have played D&D Adventurers League games on an off since the Elemental Evil season. Because of my schedule, and changes in job, schooling, and other life events, I tend to play on a more sporadic basis, only playing on the regular Wednesday night games for a few months at a time, and sometimes playing a game or two at a convention or during a game day.

This weekend our FLGS, Gopher Mafia Games in Urbana, Illinois, hosted a mini-convention which featured a lot of Adventurers League content, as well as a D&D AL Epic.
I’ll probably talk about the Epic somewhere, because it was a lot of fun, but for now, I’m going to focus on Olorondin Ked, my longest running AL character.
Let Me Tell You About My Character (I’m Sorry)

Olorondin is a Cleric/Bard who is chaotic neutral and worships Cyric. This could be a recipe for a really disruptive character, so I tried to add some personality elements that would make him more sympathetic and amenable to group play.
Olorondin has the charlatan background, and every session where there are characters that he has not adventured with in the past, he pretends to be a cleric of a different deity. He started off with Ilmater, then went to Tymora, Savras, and Eldath. If anyone calls out his behavior as not matching his purported god, plan B is to whip out a holy symbol of Mask or Leira and apologize for hiding his true affiliation.
The ways I have tried to make this character better for group play has to do with an element I picked up from reading about Leira’s followers—when Olorondin likes his companions and is trying to work with them, he doesn’t stop lying, he just lies in a manner that is so obvious that people can start to pick up on it.
Additionally, Olorondin working for the Harpers isn’t a “double agent” situation. As a devotion to Cyric, he’s providing information to the Harpers using resources that the Harpers would likely not appreciate, so as long as those resources aren’t used against Cyric’s church, that’s fine. Olorondin is also hoping to get enough influence in the Harpers to ask for a pardon for his former mentor in a manner that doesn’t arouse suspicion, because he’s proven himself consistently.
But possibly the biggest thing that I attempt to do when it comes to making Olorondin playable at the table is to tell everyone at the table what I’m doing with the character. I don’t hide that Olorondin is a cleric of Cyric from the players, just their characters. I let them know I’m not working to backstab them or anything else. Olorondin is just a pathological liar that feels comfortable with Cyric, and this is what he does.
Olorondin’s Highlight Reel 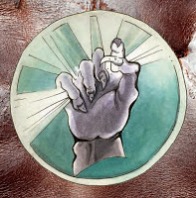 Over the weekend, I got to play through some great character moments for Olorondin. One of the regular AL DMs was playing is several sessions with us, and he’s been in multiple games that I have run, so we’re pretty comfortable playing in games with one another. He’s got a Banite priest, and every time his priest would go on about the glory of Bane and the glories of a structured society, Olorondin would casually mention various failings that have beset the church of Bane and the god himself in the past.
Even better, once Seiger (the cleric of Bane) found out that Olorondin was a cleric of Cyric, Olorondin managed to leverage a mace consecrated to Bane that he had found, prying a magic item from Seiger so that he could have the mace. The discomfort was amazing.
That was fun, but my favorite character moment was running into the same street urchin in two concurrent adventures. The group didn’t think much about him, but when we ran into him in the second adventure, I asked him to meet me later, because I wanted to talk to him.
Olorondin forged a set of travel papers for the kid and gave him 50 gold pieces to start a new life away from his current city. When the rest of the group asked about why Olorondin cared about the kid, Olorondin (in an uncharacteristically honest moment) mentioned, “he reminds me of who I was at his age.”

Right Place at the Right Time
I know that there is a lot of talk about AL and it not providing the depth of roleplay that home sessions can provide. I know that the episodic nature and the uniform campaign rules can lead to this. That said, when you have the right mix of players and DMs, I think you can still have a very memorable, very satisfying experience, and this is coming from someone that, a few years ago, was very burned out on the concept of organized play.

Like Loading...
tagged with D&D Encounters, Dungeons and Dragons, Organized Play, What Do I Know About My Character